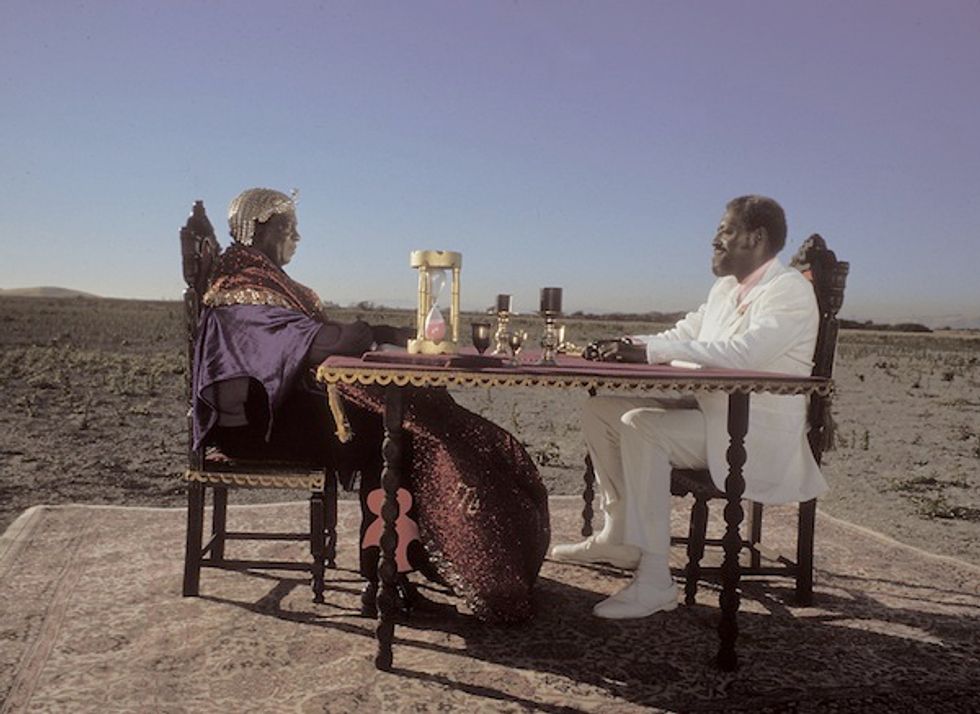 How do old films from the black diaspora that focus on Africa, hold up today? Looking at Space Is the Place, Sankofa, and Coming to America. Part 1 of 4.

Yes, more lists! Get ready for another OKA series, because they're just so amazing. Our Vintage 'Africa' series will explore work from different eras and regions of the diaspora in order to examine their depictions and discussions of Africa (sometimes positively, other times not so much). Some of this art work was produced in the West, while other pieces were produced in various parts of Africa. The connecting thread between each of these pieces is that "Africa" is in some way shape or form- the subject matter. There are four categories: Western Black Diasporic Films, Post-colonial African Films, Pan-African Songs, and Nigerian Pulp Fiction. So here's the back story:

For the past 30 years, we have been in a new era of what we constitute as Black art. Some might argue that this new era exists only in the West, but the recent commodification of "Africanness" in the fashion and film industries reveals a paradigm where we can delineate between older pieces of work, their outspokenness, and interest in issues such as race, decolonization, black power, Afrocentricism, etc., and a new era in which art reflects broader interpretations of blackness. Specifically in terms of African art, many have discussed an era of African modern art but in a lot of ways it is still difficult to assess the different shifts and transformations in the kinds of art being produced about and by Africa, along different mediums.

Let's start with a quick definition. Post-soul aestheticism. It refers to a cultural and artistic space that is informed by social, political, historical, and economic shifts that transpired after the civil rights/Black Power movements in the United States. While post-soul aestheticism/new black aestheticism refers specifically to work produced by African-Americans in the United States there are ways in which it engages with general transitions that occur in artistic movements. For example, looking at African literature from the 60s and 70s is certainly different from looking at African literature today.

We wanted to take a look at some of the greats from Black/African art over the past 60 odd years and examine how they hold up today. Along this post-black trajectory we're going to ask what makes the "greats" so great? What makes certain aspects in these works so problematic? We're using the idea of a post-soul aesthetic somewhat loosely, but as you'll see in the different pieces we highlight- when exploring these art works, ideas of race, colonialism, and blackness are loud and clear.

1. Space Is the Place

Chicago Afro-future Jazz musician Sun Ra made a film in 1974, and to put it simply- that sh*t cray. In the film, Sun Ra goes on a journey through time and music by traveling to different eras of his real-life music career. In this avant-garde film, Sun Ra and the "Overseer" (a pimp) agree to play a game of cards to decide on the fate of black people. At the beginning of the film, Sun Ra speaks to us from his planet in outer space where he says that "the music is different here, the vibrations are different." The most well-known scene of the film features Sun Ra speaking to black youth at a community center where they ridicule him for his appearance often referring to his shoes as "moon shoes." One of the characters asks Sun Ra "how do we know you're real? What are you?" This leads Sun Ra to deliver perhaps the most poignant monologue of the film:

"How do you know I'm real? I'm not real. I'm just like you, you don't exist in this society. If you were real you'd have some status among the nations of the world. So we're both myths, I do not come to you as a reality-I come as a myth because that's what black people are. Myths."

The film doesn't follow a clear time trajectory, and switches back and forth between different periods in Chicago, and outer space. This can make it pretty confusing, not even to address the weird parallel plot in a whorehouse...yeah. In any case, the basic message is that Sun Ra wants to teleport black people in the United States to another planet through music- and the idea itself is compelling and cemented in Afrofuturism. We can't really picture a film like Space Is the Place today, in part because it's so unapologetic at being problematic, strange, and outspoken. What makes it so incredible is Sun Ra's depiction of black people as a myth- and his representation of an(other) land beyond earth as the only space that can escape Eurocentric systems of power and oppression. Please watch Space Is the Place if you haven't already- it's one of those classics that should remain honored for its unique vision.

Sankofa is Ethiopian director Haile Gerima's exploration of time, slavery, and diaspora. Released in 1993, the film tells the story of Mona, an African-American self-absorbed model who is transported from a photo shoot in Ghana to the past, where she becomes "Shona", a house servant on a plantation in the U.S. South. The first fifteen minutes of the film is an extremely intense depiction of the transatlantic slave trade, and in that first-viewing, like us, you may have been tempted to pause- permanently. However, what follows is a captivating depiction of what diaspora means and constitutes for individuals. Gerima examines the dynamic between memory, oral tradition and the specific history of enslaved African women's history. Echoing Space Is the Place, Sankofa similarly engages with myth and space, but is significantly grounded in the historical trajectory of the transatlantic slave trade. Is Sankofa one of the greats? Absolutely- and it gets extra points for telling the story of slavery without a white sympathetic subject (i.e. Amistad).

Even if we wanted to (ahem), we couldn't leave Coming to America out. In his appearance on Inside the Actors Studio, Dave Chappelle stated that part of what prompted the end of the "Chappelle's Show" was a crew member's laugh and the discomfort he felt with that kind of laughter. It made him wonder if his comedy was entering dangerous territory and emphasizing stereotypes, rather than deconstructing them. Similar feelings arise when we talk about Coming to America. Is this film one of the greats? Many seem to think so- it's a favorite throughout the diaspora and even if people recognize it as problematic, we don't think we're going out on a limb here by suggesting that most people also think that it's pretty funny. If Coming to America is funny, it's funny for its hyperbolic representation of Africa, and the irony of Akeem and Semmi's arrival in the US as African immigrants that are trying to define themselves through a black experience that is completely unknown to them. Like Space Is the Place and Sankofa, "Africa" is also a myth in the film- but the myth is that Akeem and Semmi would have to travel all the way to the United States to see poverty. After all, why else would one of Akeem's countrymen be serving soda at a college basketball game in the United States?

So what's the conclusion from Part 1? Back in the day, there were quite a few films from the US that were very interested in the idea of diaspora and the myth of the motherland either through physical space or outer space. Today, it's harder to locate work that is explicitly interested in these ideas of diaspora- these works of art can be charted along the trajectory referenced earlier and they directly engage with notions of race, gender, colonialism, music and fantasy. It seems that was a pretty sweet combination.