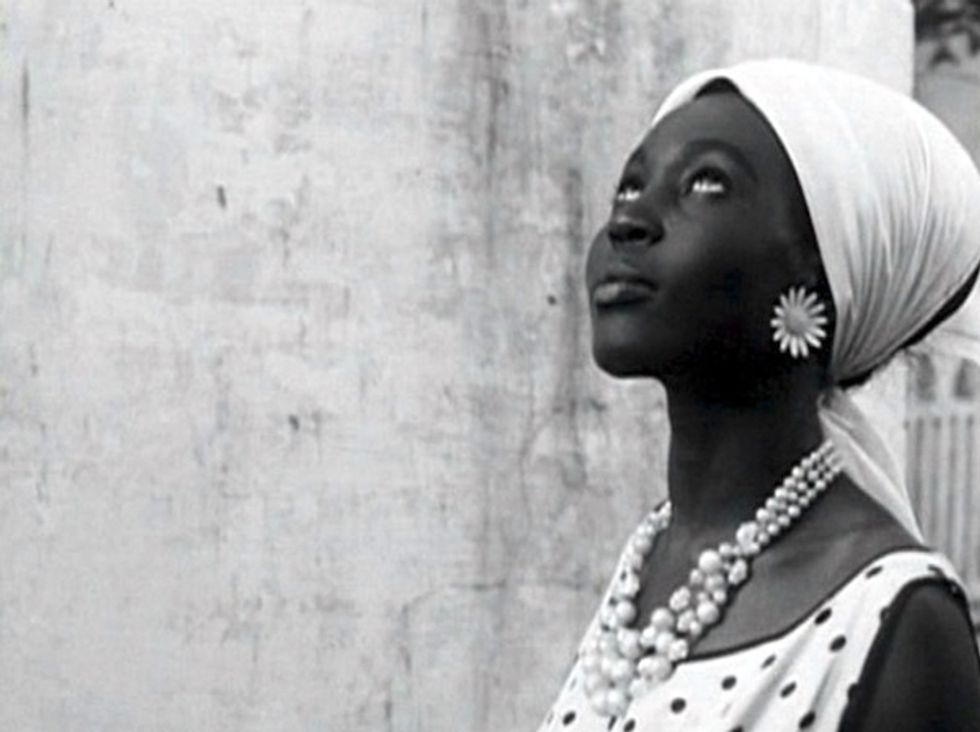 How do Postcolonial African films engage with the idea of 'Africa'? Looking at La Noire De (Black Girl) Battle of Algiers and The Gods Must Be Crazy. Part 2 of 4.

Continuing with the Vintage 'Africa' series, here's our second category "Postcolonial African Films." In Part I, we laid the groundwork for this series and our exploration of 'Africa' as a subject matter in various pieces of work throughout the diaspora. Part II looks at three films produced between the 1960s and 1980s that engage with the idea of independence and colonialism- similarly to the films from Part I, 'Africa' in these films is visible and explicit.

Ousmane Sembène's La Noire De (Black Girl) was released in 1966, six years removed from French colonialism in Senegal. The film centers on Diouana, a young Senegalese women who follows a rich French couple, previously based in Dakar, to France to continue working as their nanny. However, when Diouana arrives in Antibes, France, she realizes that her employers expect her to be a full-on maid; in Dakar the couple had several house helps, but in Antibes she is the sole house help and must do the work that she finds beneath herself. She feels as though she has been lied to and becomes listless to the dismay of her employers. If you have yet to see the film we won't give the ending away, but let's just say it's intense. Perhaps it's because La Noire De excels through subtlety. The film focuses on the quotidian and travels through Diouana's memories and the present. One of the most fascinating aspects of the film is Sembène's exploration of postcoloniality through both Diouana and the French couple's inability to cope with a new order that has similarities, but many differences to their lives in Dakar. As an early exploration of the postcolonial, La Noire De posits how 'Africa'- through memories, objects, and actual bodies, can survive in the West. Sembène's ending basically says "and that's just how I feel"- you think "Money Trees" had a past life?

Bear with us, because we get pretty excited with all the revolutionary that is Battle of Algiers. Released in 1966, just four years after Algeria's independence from France, director/writer Gillo Pontecorvo based the film on co-writer and former FLNmilitary commander Saadi Yacef's writings during France's occupation of Algeria. Battle of Algiers focuses on the years prior to independence (1954-1957) and how the French military, somewhat successfully disrupted the FLN's operations in Algiers. The film is shot like a documentary or newsreel, providing it with an "authentic" feel and subsequent impact. No doubt about it, this film is amazing. It's incredible because it depicts the grittiness of urban guerilla warfare, but what we find to be one of the most interesting elements of the film is the representation of Algerians and their commitment to independence. We see children, women and men working together and creatively manipulating the assumption of the French that only the men are to fear. One of our favorite scenes? When three FLN Algerian women cut and bleach their hair so as to resemble non threatening women so that they can travel into the French quarter and subsequently plant bombs in different locations. However, similarly to La Noire De, Pontecorvo's epilogue at the end of the film, which shows Algeria's independence, leaves us with a subtle but significant question as we consider the notion of postcoloniality. Was The Battle of Algiers actually won? Or like all other battles for independence throughout the continent, did independence become a compromise?

3. The Gods Must Be Crazy

Released in 1980, Jamie Uys's The Gods Must Be Crazytells three separate but convergent stories in Botswana. The film tells the story of Xi, a "bushman" from the Kahari desert whose peaceful world is turned upside down when a coke bottle falls from the sky. Initially confused by the bottle, Xi and his family believe that it must be a gift from the Gods, but soon after the bottle causes a small injury to one of Xi's children he vows that he must return the gift to the Gods as its presence has done harm to his community. The rest of the film follows Xi through his trials and tribulations to return this coke bottle. In addition to Xi, we meet Kate Thompson, a South African reporter that has come to Botswana to teach the African children. A side plot involves Harare (the references are pretty obvious), which is run by corrupt Africans and has fallen at the hands of guerilla soldiers who are trying to take over the government. It may sound unlikely, but Uys manages to bring all of these stories together by the end of the film, and as viewers, we've either watched a hilarious film about a "bushman" or a film that in its attempt to problematize notions of what it means to be civilized, actually emphasizes that whites should stay in Africa, because the Africans need them. We could go on for days about why this film is such an issue - in its production, reception, and legacy - like how the actor that played Xi (N!Xau) was only paid $2000 dollars for a film that grossed $90 million dollars in its first four years (Although apparently later he was provided with $20,000 dollars and a small monthly stipend). But alas, the film is part of this category for a reason- it's one of the most popular African films of our time. Applying our retrospective insight we recognize that its popularity comes from the humor of it all, but just like Coming to America, we have to wonder if it's laughing with us or laughing at us.  The film is clearly embedded in South African politics at the time- Jamie Uys's message that Africans are complex is somewhat still welcome, but his over simplification of different kinds of "Africans" and the idea that Africans do not know how to govern themselves recreates that vintage "Africa" that we somehow have yet to escape in mainstream theatrical representations of Africans in the West.

The takeaway from Part II?

If earlier we suggested that looking at post soul aesthetics was a way of understanding the transformations throughout African art in the diaspora, in this category we again see how these vintage films engaged with the idea of  'Africa.' Africa as a subject matter in La Noire De, Battle of Algiers, and The Gods Must Be Crazy, functions as a question of the transition between colonialism and independence. While stylistically different, the films converge in their exploration of postcoloniality and perhaps this is why they continue to be recognized as some of the best African films. Although, if it were up to us, and clearly it's not- The Gods Must Be Crazy would be a little less problematic and more of that funny with us instead of at us.

Read Vintage 'Africa' Part I: Representations of the Motherland and Otherlandshere.