Nigerian Superheroes Set To Take Over The Comic Book World 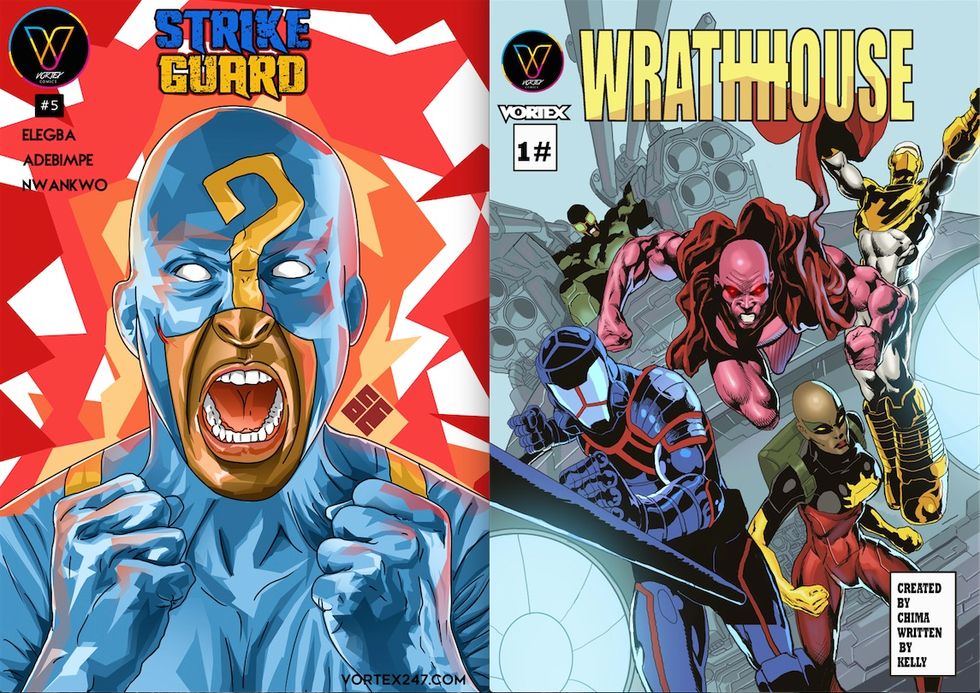 This Lagos-based startup is ready to take over the comic book world with their uniquely Nigerian superhero stories.

"The Nigerian comic book scene is blossoming," insists Somto Ajuluchukwu. It’s a Saturday night in Lagos, and the 25-year-old is hard at work bringing African superhero stories to the world’s fingertips.

Ajuluchukwu is the Creative Director of Vortex Comics, a Lagos-based company creating comics and cartoons rooted in African culture. They launched last June with a uniquely African fantasy take on the superhero story. And while their readership might not be in the hundreds of thousands just yet, a recent release, Wrath House, had about 15,000+ online readers. Soon they’ll publish their first one-off print editions.

“It’s been an interesting journey so far” says Ajuluchukwu, who founded Vortex in 2013 at the age of 22. “I felt like African stories needed to be told. It was important that we expose our culture,” he tells me about why he started the company. “We decided to share our stories and our traditions and history with people.”

Since then, Vortex has gone on to publish five separate titles (their newest, Sannkofamaan, arrives March 19th) and about 15 comic books.

The journey hasn’t been easy of course. There’s the more practical challenges associated with running a publishing business in Lagos. “Basic materials that publishers require are a luxury in Lagos” says Ajuluchukwu. A lack of affordable power and the price of imported paper makes Nigerian print companies expensive to work with. It’s what has kept Vortex’s comics available online-only, until now–a couple of print collector's’ editions are in the works.

There’s also a societal barrier to consider. “It’s not so easy to convince people why they should watch African cartoons and read African comic books” Ajuluchukwu says of the struggle to win over Nigerian audiences. “African people consuming their own content is a challenge we have.”

Nonetheless, Ajuluchukwu remains determined. “Over time I believe they’re challenges that we’ll surmount” he says of building Nigeria’s comic book counter-culture. After all, it was the need for these things that brought about the founding of Vortex.

The Vortex Comic team at their office in Lagos. Somto Ajuluchukwu pictured front and center. Courtesy of Vortex.

For his company, the teaching is quite literal. Through the Vortex Academy, Ajuluchukwu and his colleagues hold afterschool programs to teach children how to make cartoons and comics with the hope that the more people know how to make comics, the more the industry will grow. They also want teaching to extend outside the continent. “The same way I’ve learned about Asian culture, through Manga and anime, and the same way I’ve learned about Western culture through superheroes like Marvel, we hope for people to learn about Africa through Vortex,” he says.

Kids and young people are chief among the company’s intended audience. “[We hope to] build a generation of people that actually consume African content,” says Ajuluchukwu.

The origin story of their franchise superhero Strike Guard is grounded in Yoruba spirituality. As Vortex legend has it, fictional University of Lagos student Ayodele Elegbahe is murdered and dumped into the grave of the Yoruba deity Ajagbeja. He has the chance to come back to life with Ajagbeja’s spirit using his body as a host. Young Ayodele agrees and becomes the Lagos crimefighter known as Strike Guard.

“This is the story of Strike Guard the superhero, but this is also the story of Ajagbeja, the traditional deity in Yoruba culture,” says Ajuluchukwu.

“[We’re] bringing historical facts in, tradition in, and merging that with contemporary culture of what people would know about superheros.”

For all things Vortex, head to their official online home at Vortex247.

A page from Strike Guard, created by Ayodele Elegba. Courtesy of Vortex Comics.

A page from Mumu Juju, created by Etubi Onucheyo. Courtesy of Vortex Comics.

The characters in the Vortex Comics universe. Courtesy of Vortex.