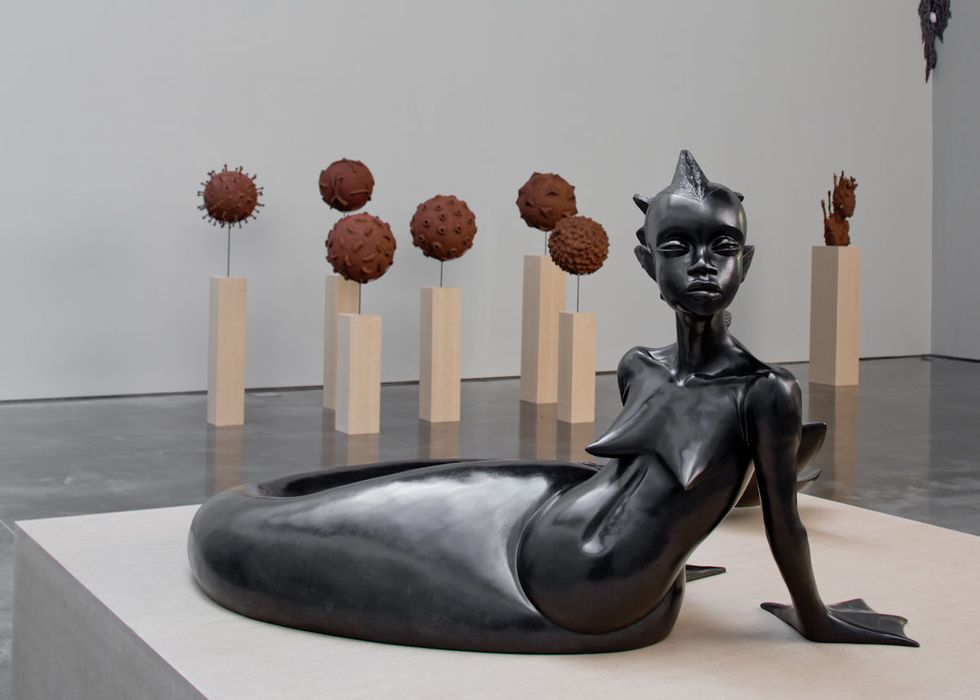 Wangechi Mutu's latest, 'Ndoro Na Miti,' is a fortified safe space for womanhood both in the fantasy and real realms.

Kenyan visual artist Wangechi Mutu is best known for her intricate collaged portraits of women created from a range of print media, including, sometimes, pornographic magazines. Her final creations are more mythical than exact; often, tendrils replace limbs. In the case of a pair of sexy glossy lips, for example, are positioned to express climactic release, elevate to become main features on humanoid forms, and, of course, are immortalized as brilliant works of art. By re-contextualizing contemporary images of women, her art becomes an act of subversion against the creators of said imagery.

With that departure point for understanding Mutu’s work, her newest show, Ndoro Na Miti at Gladstone Gallery in New York City, may seem like a resignation from her signature aesthetic. There is no collage in sight. Neither is there video, a medium through which she has previously brought her collage to life (notably, in The End of Eating Everything that featured Santigold).

This time Mutu, in flaunting her talent as sculptor, provides another example of the multidimensionality of women. She actually received her MFA in sculpture from Yale University although she has primarily worked with collage. The title of the show translates from the Gikuyu phrase to ‘mud and trees.’ Mutu broadens her cannon of representation of women as marvelous and fluid creatures made of ornately arranged paper cutouts to now include static imagery that is still majestic, and made of earthen materials.

The smoothed concrete exhibition space in Gladstone Gallery offers its own natural palette for the presentation Mutu’s sculptures. In the center of the space is the ‘piece de resistance:’ a large bronze nguva, a figure from East African folklore that blends human and marine characteristics. Western understanding would liken it to a mermaid.

Its face is turned away from the entrance, underscoring the mysterious identity of this serpentine figure. The sculpture sits atop a large wooden platform so access to its front requires you to walk around its base and enter its own space. The true grandeur of the sculpture is expressed through its non-verbal command. In a silent exchange, your permission to engage with the figure and examine it intimately is granted.

Whereas Mutu’s portfolio of work on the female figure is relatable to the artist for obvious reason, this exhibition seems more personal. The clay was sourced from the area that surrounds her studio in Nairobi. Near the nguva are giant beads arranged like the Catholic rosary—a link to Mutu’s early learning in an all-girl private school.

There’s also a self-portrait: On a small table on the other side of the nguva lies a bust titled Second Dreamer. Designed with cornrows, the sculpture calls to mind the artist’s own unique hairstyles. Cast in bronze but coated in gold, this piece is stunning. The press release states that with this piece Mutu, “challenges the stasis of the bust and the appropriation of African masks through a self-portrait that…acts as a corrective to a violent cultural consciousness, while offering an alternative narrative of embodiment and being in the world.” The description is true of her collage work as well.

It’s true that Mutu’s work is uncomfortable. Replete with otherworldly oddities and skimp in identifiable human parts, Mutu’s representation of the female form is signature, and dense. Some have even described her work as “grotesque.” Ordinarily a word that conjures grossness and distaste, Mutu embraces this description. In an interview with CNN anchor Isha Sesay, Mutu said of this term, “No it doesn't bother me. It means that people are looking. It means their senses are on when they are in front of the work, which is important. [T]here must be some sort of wonderful process going on in their brain, which is good.”

Grotesque applies to Mutu’s sculpture. Other figures surrounding the nguva include a life-size clay figure in a kneeling position with a tree growing from its crown. Another human-ish sculpture has wooden planks protruding from its face, which is eternally twisted in an expression of pain, anguish and unease.

But despite these inclusions the space is not frightful. To the contrary, the setting of the encased concrete exhibition space becomes a chamber of African beauty and representation. It’s also a space in which woman is in control. This conclusion is reached early, at the first sight of the domineering nguva, and then confirmed after absorbing the entire exhibit, when you inevitably fall in awe of Mutu’s clear mastery of sculpture. Ndoro Na Miti is a fortified safe space for womanhood both in the fantasy and real realms. Mutu’s figures are guardians of female identity and representation.