Watch Burna Boy Perform 'Ye,' 'Anybody' & 'On the Low' With a Live Orchestra for Trap Symphony 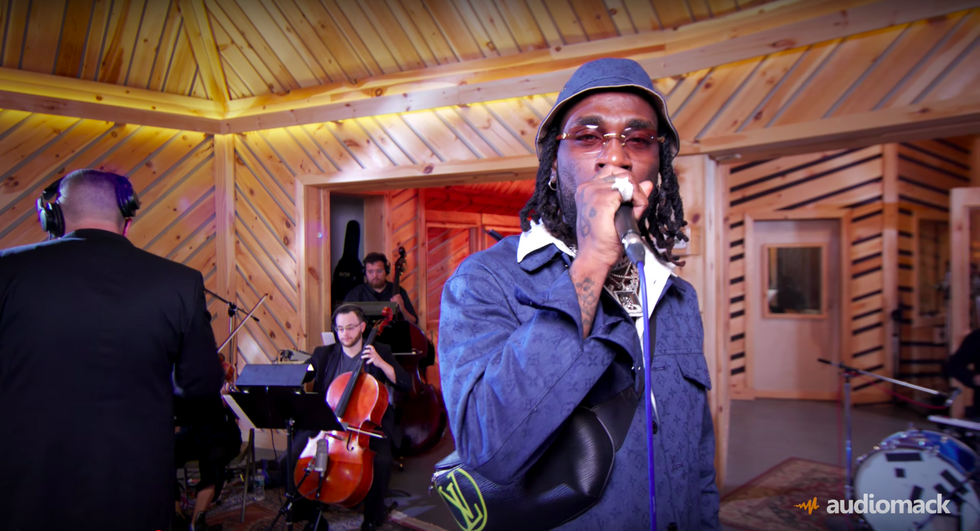 OkayAfrica was in attendance as the artist performed some of his biggest hits for Audiomack's Trap Symphony.

Burna Boy is the latest artist to appear on Audiomack'sTrap Symphony performance series, which sees some of music's biggest acts perform their hits backed by a live orchestra.

OkayAfrica was in attendance at The Bunker Studio in New York City to watch Burna's intimate live studio performance, which saw him run through his hit songs "Ye," "On the Low," and "Anybody," with undeniable ease.

The artist had flown into NYC that same morning and Trap Symphony was the last stop on an extensive press run prior to the release of African Giant, which included several interviews, an OkayAfrica-hosted listening party in LA and an appearance on Jimmy Kimmel Live!

Entering the space in an all-denim look, accessorized by a yellow-accented Louis Vuitton fanny pack, the artist displayed his usual nonchalant confidence before entering the brightly-lit studio space, where an eight-piece orchestral ensemble awaited him.

Backed by the talented ensemble who had brilliantly reworked each 'afrofusion' track to create the symphonic sound, Burna breezed through each song in a single take. "We did all three, abi" the artist remarked once he had finished.

As one of the most internationally recognized presences in the Nigerian music scene, Burna is at the forefront of bringing the sounds of the continent to US audiences."As an international face of bridging the gaps between genres, communities, continents, and more, Burna Boy was a natural fit for the latest installment of Audiomack's Trap Symphony," said the Audiomack team in a post on their Medium page.

Check out the performances below.