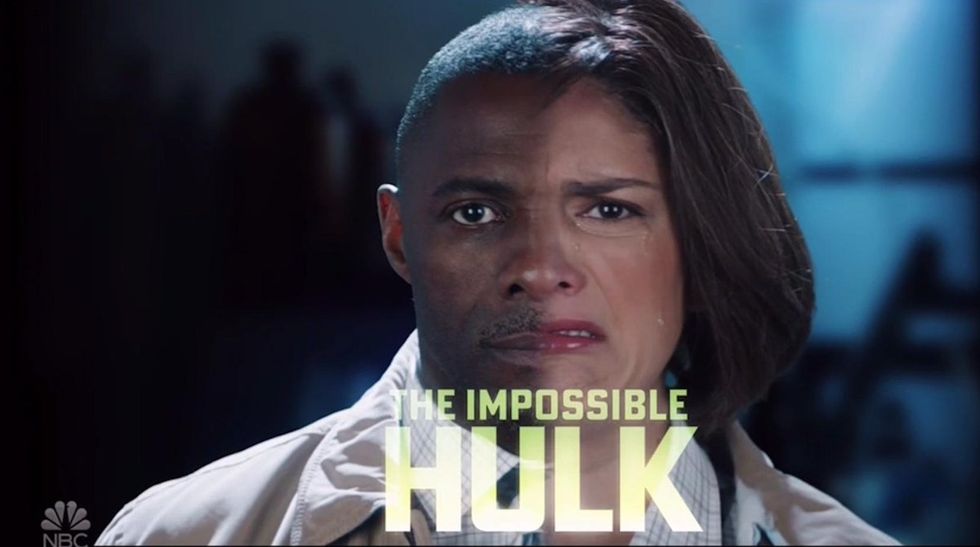 The skit rightfully pokes fun at the "Barbecue Beckys" of the world.

Idris Elba made his Saturday Night Live debut this weekendto promote the release of his upcoming Netflix comedy Turn Up Charlie, and one skit in particular has caught our attention for how scarily accurate it is.

The highlight of the night came in the form of an Incredible Hulk parody, aptly called the Impossible Hulk, which saw the actor transforming into an insufferable white women, whenever he didn't get his way.

The skit is an obvious commentary on the entitlement displayed by several white woman—given nicknames like Barbecue Becky, Permit Patty and Cornerstone Caroline—who have been lambasted on social media for calling the cops on black folks who are simply minding their own business.

Their behavior is downright harmful and ridiculous, and the skit humorously conveys the absurdity of these occurrences.

The first part of the skit shows Elba's character turning into a hysterical white women, played by SNL cast member Cecily Strong after not being able to return something at the store. In a later scene we see the Impossible Hulk getting out of a run-in with the police after simply crying and threatening to record him.

These scenes are sadly, all too familiar.

Check out the full Impossible Hulk skit below. Turn Up Charlie, which stars Elba as a struggling DJ-turned nanny, hits Netflix on March 15.