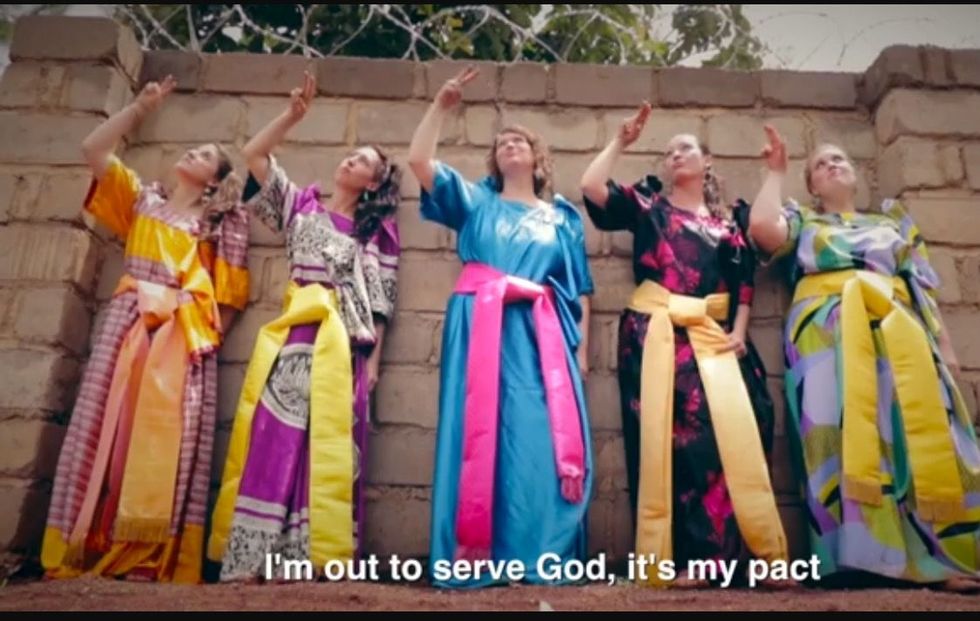 Development groups cannot truly do effective work while offending the same people they claim to serve.

“Our dance video came in a dream from God, the author of every creative thing.”

Those are the words of Natasha Perryman, the creative director of Luket Ministries, an Oklahoma-based missionary group currently working in Jinja, eastern Uganda who this month uploaded a culturally insensitive dance video to YouTube ostensibly to promote their humanitarian work.

Echoing the now infamous Kony 2012 campaign from Invisible Children, this one reeks of white saviorism with a overlay of cringeworthy paternalism.

It features seven young white American women with stage names 50 Shillings (a play off the name of rapper 50 Cent), Ro Killah, Mo'lasses, LL Cool K, Lil Chainz, Notorious D.I.B. and Badd Gnat. The women sang in a video to Justin Timberlake’s song "SexyBack" but instead this group vowed to “Bring Missions Back.”

Here’s what’s wrong with the video and the worldview it represents:

Lack of Respect For the Cultures and Struggles of Ugandans

Adorned in traditional gomesi worn by Ugandan women on special occasions, the women used children, who may be orphans, as props in their video. This was very disturbing to watch. The viewer of the video is not told the children’s names or where they came from. All seven children were tied around the missionaries’ backs as they sang about themselves and their own experiences.

The women also mimicked and mocked the hardships and daily life of many Ugandan women—from cooking, to fetching water in jerry cans, they sang about how they needed a bath because their bare feet were soiled orange and referred to it as being a “dirty babe,” accompanied by sexually suggestive dancing while swallowing deworming tablets used to treat parasitic worms. I wondered if these women stopped to think that many children and mothers don’t have access to these tablets, which result in illness and sometimes death.

In other off-putting scenes, the missionaries mocked local foods like posho (white millet) and sukumawiki (collard greens). Worse, the women danced around with mosquito nets, playfully spraying themselves, perhaps forgetting that many Ugandans become ill and die from malaria—something I can’t imagine individuals in development work would joke about or take lightly.

The Narrative is About Missionaries, Not the Locals They Claim to Be Helping

First off, for a group that claims to have Ugandans at the center of its ministry, it falls short. The video was about the missionaries themselves—their voices, their soiled orange feet, their need to slather on sunblock because they are ‘hot and sweaty’. The distasteful disclaimer at the beginning of the video states “The sole purpose of this video is to make you laugh. It is in no way meant to harm the country of Uganda or disrespect its people. No people, babies, bodas, gomesi, or mosquitoes were harmed in the making of this video.”

My question is—make who laugh? Who is the target audience for this video? I’m guessing it’s not Ugandans or Africans for that matter. It’s for other bright-eyed 20-somethings from the West whose motives I question—since there are also black children and black communities in Tulsa, Oklahoma if they are willing to look in their communities—but instead choose to buy $2,000 plane tickets to travel thousands of miles to ‘Africa’ to hoist orphan children on their backs while they dance around in a music video that makes them feel good about themselves.

The few Ugandans that did appear in the music video was the boda boda driver (motorcycle taxi) that drove the missionaries around, the children on their backs in a dance routine and two older Ugandan girls. They were all in the peripheral, not at the center of the narrative of a promotional video that was supposed to be about them. A few statistics about the country runs up the screen at the end of the video without actual locals speaking or expressing themselves. They—babies, boda boda drivers and even the dancing girls—were just props for the dancing white missionary girls. Too add salt to the wound, a short glossary at the end of the video simplified the country to short colloquialisms and words for the next “dirty babe” who strolls into town.

A dance video with a white-led group at its center asserting to “bring missions back,” missionary work that, to black Africans, depicts the dangerous white savior mentality, neo-colonalism and frankly contempt for Africans as recipients, always in need of ‘saving’ and ‘help.’ That’s an old, paternalistic and racist colonial mindset that I’m not willing to keep silent about.

When I reached out to the creative director of Luket Ministries on the same day it published, she was very dismissive. Instead of listening to Ugandans (and white American allies who are in development work) who tried to explain cultural appropriation, White Savior Complex and simply the need for organizations likes hers working in African countries to be respectful and treat people with dignity, she replied with “Everything posted is indeed controversial these days. We had our Ugandan pastors and staff view and edit before sharing to be respectful and promote missions. Please feel free to remove it from your feed.”

Perryman didn’t willingly remove the video from her own personal page or the Luket Ministries page for the Ugandans and other Africans she offended. She stated she took it down because her staff and friends were being attacked (see screenshots below) and added, “Our dance video came in a dream from God, the author of every creative thing.” Never mind the Ugandans she offended because her god says it’s okay. Never mind the Ugandans she hurt while her friends on social media cheered her on as she made a mockery of the people and cultures.

Her response is reflective of the arrogant and condescending attitude of white-led NGOs in Uganda that have no respect whatsoever for the people they are claiming to serve. Just because a few of your black friends say it’s okay doesn’t make it acceptable or justified. How many times in history have we seen people in a specific group be complicit in the destruction of the entire group? A few misguided Ugandans who probably want Luket Ministries to continue funding their projects do not speak for me or many other Ugandans who find it offensive to mock of our communities.

• I want Ugandans—and Africans in general—to see what we are allowing and what we are accepting to happen in our own country, on our continent. Why are our communities allowing organizations like this to exist and thrive? Why are we allowing our children to take part in videos that belittle their identities?

• I want future bright-eyed white Americans (which I find it strange don’t want to volunteer in Harlem or Detroit or Oakland or Tulsa here in America with black children, black communities, and just communities who are underserved, who deserve just as much help and attention as the children in Jinja or Kampala or Lira but want to buy a $2,000 ticket to fly thousands of miles to Uganda to take pictures next to smiling black babies) to ask themselves and really think, think hard about why they travel abroad and why they are there for. Are you really there to support Ugandans on the ground or are you there for yourself—for your ego, your resume, your latest Facebook profile photo or latest Instagram post taken with yet another African child hoisted on your back? Who are you there for, really?

On Wednesday, October 17, seven days after after the video circulated social media, Luket Ministries issued a short, contrite public apology on their Facebook page. Adam Perryman, the husband of Natasha and co-founder of Luket Ministries also emailed me an apology. Ugandans at home and abroad, fellow Africans, our (white) allies in development work and friends from White Nonsense RoundUp, a non-profit group of white people who call out racism, reached out to the ministry before the half-assed apology was issued. The apology did not address specific points. It didn’t include steps of how they plan to produce more culturally sensitive programming or how they plan to reconcile with the community in Jinja where they work or the Ugandans in Uganda and around the world they offended. The apology didn’t address how they plan to work with fellow missionaries who spoke out against the video. It’s the kind of insincere apology you make when you just want it all to end and that is not enough.

Ugandans and Africans in general deserve and should be treated with respect and dignity. Groups working in development cannot effectively serve while offending the same people they claim to care about. They cannot be effective if they suffer from superiority complexes or neglect to make concrete plans and take steps to change.

Arao Ameny is a Ugandan-born journalist and writer based in Maryland. Follow her on Twitter at @araoameny.