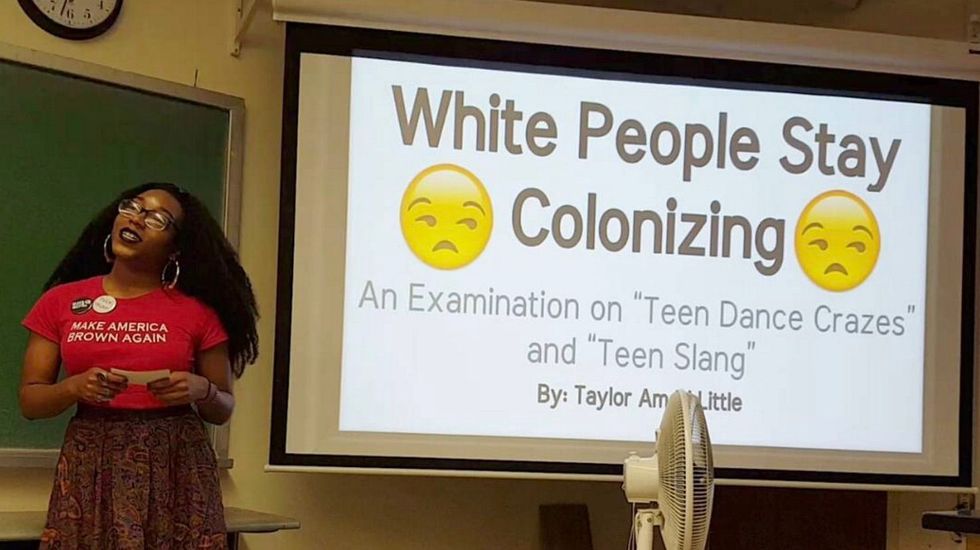 Taylor Amari Little, aka Controversial Tay, is a freshman and all-around badass activist at Eastern Michigan University, where a number of racist episodes have taken place this year, including one in September in which a man in an SUV attempted to plow through a group of student Black Lives Matter protesters who were protesting against racist graffiti that was spray painted on campus.

The 18-year-old Criminology and Criminal Justice major has emerged as an important voice at the predominantly white institution. She’s also the founder of a social justice organization that seeks to service homeless people around Detroit (The Temple Project) and a visibility project for queer Muslims (Queer Ummah).

Most recently, Little has people talking with an enlightening presentation she gave during one of her classes this week. The presentation is titled “White People Stay Colonizing,” and it’s an examination of “teen dance crazes” and “teen slang” in which Little, sporting a brilliant "Make America Brown Again" t-shirt, argues the following: “The most important yet hidden fact about the history of mainstream culture is that it always derives from people of color, especially black people.”

Watch the full talk below.

what happens when I'm assigned to do a presentation #imactuallyhellaexcitedformyspeechtomorrow #itshellaBlack