Who Are the Black-Painted Mandinga Warriors of São Vicente's Carnival? 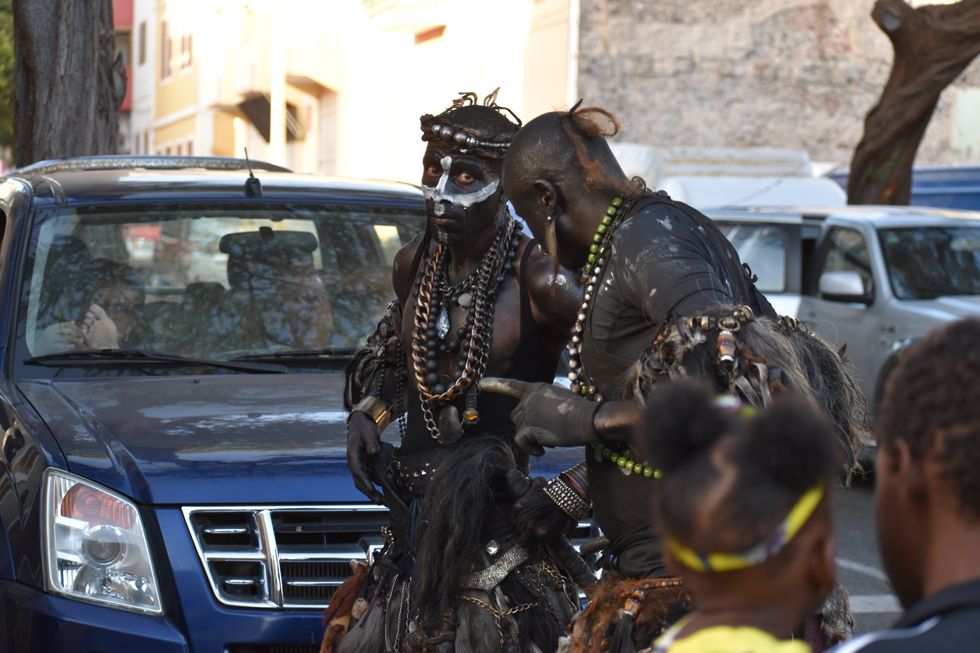 We explore the fascinating history behind a curious carnival tradition in Sao Vicente, Cape Verde.

Tens of thousands of people gather in early March every year in the island of Sao Vicente for Carnival. As one of Cape Verde's 10 islands, its major claim to fame is as the home of the legendary singer Cesaria Evorawho was known as "The Barefoot Diva" and almost always performed with a bottle of Cognac on stage and a cigarette in her hand. Though it is now the second largest island in the country in terms of population and the unrivaled capital of culture in the country, it was mostly uninhabited until the mid to late 19th century.

One of the most breathtaking sights from the Sao Vicente Carnival is that of The Mandingas. While they are a common sight throughout the festival, the day fully dedicated to them is the final day of Carnival known as The Mandinga Funeral/Carnival Funeral. The carnival funeral is an occasion for people to honor their black ancestors while also mourning the end of the festival. Greased completely in oil and tar, donning sisal skirts and carrying spears, they are a sight to behold as they transform themselves into Mandinga warriors. Everyone follows them from the relatively poor neighborhood of Ribeira Bote as they carry two black coffins with some in the crowd donning similar attire. The crowd chants, sings and dances while the Mandingas call out, "Harrrrrrryaa!" The parade through the streets lasts all day culminating in the sunset burial of the coffins in the ocean. The crowd is worked into a frenzy as the drums beat louder and a sort of orgiastic, other-worldly energy takes hold of the crowd. Some people jump into the ocean following the coffins.

Throughout the carnival I was very curious about the Mandingas. While I had not witnessed anything disrespectful in their behavior when they were covered in tar and wearing their costumes, the only reference point I have for such attire is blackface. I needed to get to the bottom of it and understand the motivation behind their costumes. I also wondered, "Can it be blackface if you identify as being black or part black?" To seek answers I turned to the legendary Cape Verdean dancer and Artistic Director of the Cultural Center of Mindelo, Antonio Tavares. In addition to all his accolades he is also an expert on the Mandinga history in the Sao Vicente Carnival. He asserts, "This is not blackface. We are a people who have been cut off from our African roots, suffering from an identity crisis. The Mandingas allow the youth of Sao Vicente to reclaim our African heritage and pay homage to this heritage." The battle cry from the Mandinga crew "Harrrrryaaa!" he has discovered from his research to be a mispronunciation from a song by the legendary mid-20th century Jamaican-American musician, Harry Belafonte. Antonio continues, "In his song, he is telling black people to "Hurry up!" as the revolution is coming."

There are two key explanations for how the Mandingas of Ribeira Bote came to dress as they do. One is that sometime in the late 19th century, there was a Mozambican king, Gungunhana, who passed through Mindelo on his way to exile in the Portuguese island of Azores in the middle of the Atlantic Ocean. Exile in Azores was Gungunhana's punishment for having rebelled against Portuguese rule. On his way there he passed through Mindelo—those who saw him were inspired by his noble nature, resistance to colonial rule and emulated him. Another explanation for the inspiration behind The Mandingas is that sometime in the mid-20th century, there was a group of people from the actual Mandinga tribe from West Africa that passed through Mindelo on their way to participate in an independence festival in Portugal where they had been invited by then Portuguese Prime Minister António de Oliveira Salazar.

Whichever story is true, Antonio Tavares reiterates that dressing as The Mandingas is an act of reverence, pride and paying homage to a part of their identity that has been lost. And so, while it might be a bit jarring to the visitor to Cape Verde to see the choice of costume of the Mandingas of Ribeira Bote, it is perhaps a reminder that sometimes things are neither black nor white, but a little bit more complex.