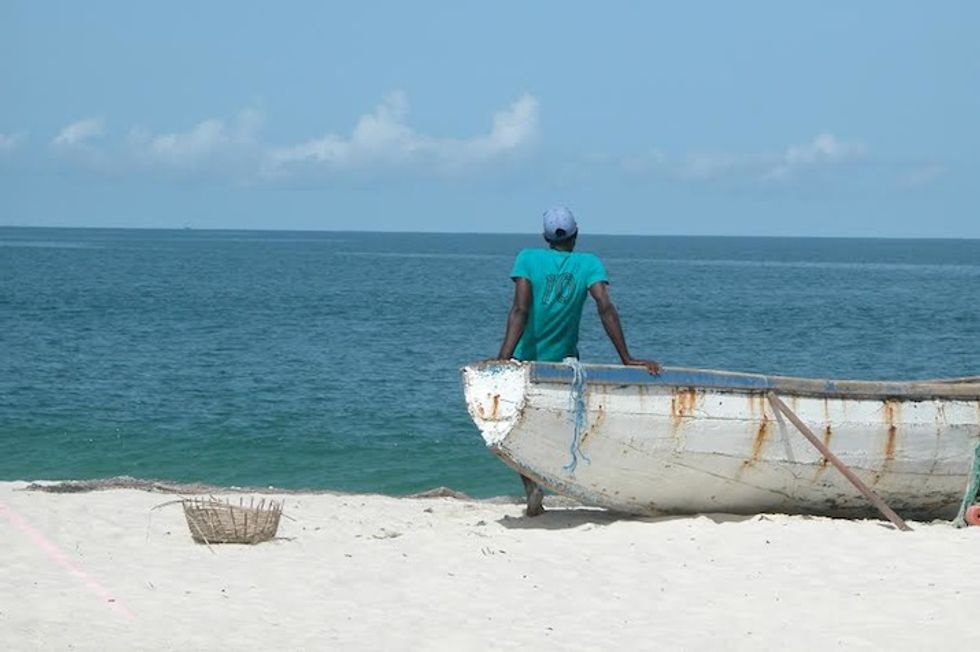 So far my village of Tokeh, in Western Sierra Leone, has not had a single suspected or confirmed case of Ebola. I believe that this is because the strategies we put in place to protect our people are working.

Tokeh is a traditional fishing village located on the Freetown Peninsula. It was settled during the colonial era by a Sherbro fisherman named Pa Baw. Depending on the roads and what kind of car you are driving, today we are about an hour and a half drive from the city center. We have one of the largest and most attractive beaches in West Africa known for its majestic mountain backdrop, thick forests, blue-green ocean, and white beaches dotted with a very few resort hotels. Tokeh is like a picture postcard of paradise, despite our location in a very poor country.

The Ebola virus is very new to this part of Africa, so people have little or no idea how to deal with such a deadly epidemic. Even though our country’s print, radio, and electronic media have been broadcasting information about the disease, Ebola has now claimed over 1,300 lives in Sierra Leone, and the numbers are growing. This is partly because much of the population still finds it difficult to believe that the disease really exists. (It is also because our health system is so underfunded and weak.)

When the epidemic first started, our village headman (the chief) called on all villagers to have a meeting in which everyone was educated thoroughly about the virus. All major ethnic groups residing in the village were represented – Temne, Sherbro, Loko, Limba, Mende and Fula – and each group had a speaker of their local language to educate their people. All groups were given the same message, but spoken in their different languages.

The key messages were:

(1) people who get medical care early have a better chance of survival;

(2) don’t allow any stranger from any part of the country into the village unknown;

(3) don't hide sick people behind closed doors until the sickness gets worse;

(5) report all deaths immediately to the headman or call the Ebola hotline (117);

(6) finally, a man’s best servant is himself so therefore let’s secure our own environment.

Two checkpoints have been installed at the entrance and the exit points in the village so that we can account for people coming in and going out of the village. At the checkpoints people must wash their hands with either chlorinated water (specific people are trained to mix the chlorine at a concentration of 0.005%) or soap and water before entering. Buckets with chlorine wash have also been placed at the mosque and churches, and positioned in other key areas around the village.

To complete our Ebola prevention methods, a voluntary youth task force was formed to check all houses in the village on a weekly basis so as to find unwell people that may be scared to come forward. The youth are the backbone of any community, and certainly in ours, but organizing people to work continuously without pay has been very difficult. In the beginning of the crisis all the able-bodied youth volunteered their time, but as time goes on some of them have dropped out since there was no arrangement of payment. Currently there are only 15 left in the crew, 10 of which I regard as constant die-hards because of their unwavering dedication to the work. Because Ebola symptoms are very similar to those of malaria – an illness that is very common here – ­the headman cleverly included two trained and qualified nurses among the taskforce volunteers to determine when someone reports fever, headaches, or vomiting, for example, whether they may have Ebola or something else. When the volunteers find someone who is sick or unwell and hiding or afraid to come out, they encourage the patient to go to the village medical center for testing and medical check-up.

In a nutshell, because all the preventive measures put in place are working, we are Ebola-free and have not yet had a suspected or confirmed case. Alongside the intervention of the international community, we will work cooperatively to eradicate this virus that has no respect for age, color, political affiliation or position. In Tokeh we strongly believe that Ebola can be beaten.

Matthew Roberts graduated from Services Senior Secondary School in Freetown, Sierra Leone, where he was the top scholar and President of his class. He has passed his West Africa Senior Secondary School certificate examination in 2011 with "flying colors” and hopes to find the financial resources so he can go on to University. In the meantime Matthew is a trainee at THE PLACE HOTEL in the housekeeping department and has acquired a certificate in Microsoft Packages. He is also a competitive football player.