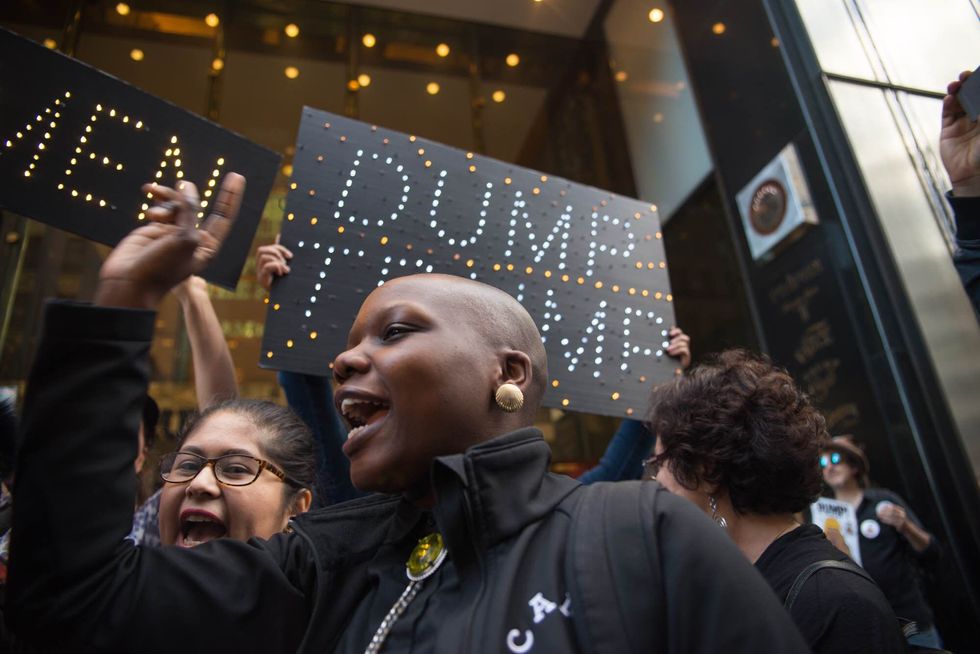 Women of color have always been at the forefront of the fight for equality and will continue to do so under a Trump presidency says Agunda Okeyo.

I was born during a coup in Nairobi, Kenya in 1982 and I’ve been sensitive to war and conflict ever since. When I was eight, I was in New York City when the Gulf War was raging. When I was eleven or twelve I was in Nairobi again when the genocide in Rwanda was being ignored by the western world. When I was a college freshman in Massachusetts, September 11th happened and W gave us the horror of “shock and awe.”

On Wednesday evening myself and hundreds of other activists and protestors came together at Columbus Circle in NYC near Trump International Hotel and Tower. We came together under the banner of #Our100 related to an open letter I signed among women of color (WOC) leaders to pledge the continued fight for women’s equality and security in America.

For nearly 4 weeks before that night, I had been among a smaller NYC based collection of activists regularly protesting outside of Trump Towers to call for the GOP to unendorse Trump and take responsibility for their history of racist, sexist and xenophobic policy and practice. A number of people spoke on Wednesday, including Heather McGhee, president of progressive think tank Demos and Linda Sarsour, Executive Director of the Arab American Association of New York.

When I spoke, I knew I wanted to say something simple that resonated. In fact, I decided several years ago to cut affiliations with any singular institution to opt for a life shaped primarily by my ethical beliefs hence the life of a writer, public intellectual and activist. In this way I feel closer to the emotional lives of people; never siloed in one community or another. Among the things I told the crowd was that “white supremacy is the greatest disease in this country” and invited them to chant with me to “stop white supremacy.” I also reminded them that the arc of human rights from anti-lynching to suffrage to the Civil Rights era was led by black people, especially black women. Even looking at this election, black women voted 94 percent for Clinton and have the highest voter turnout in elections since 2008.

Simply put, that is precisely why we are in this mess at the moment. Trump sold poor and middle class white folks on the idea that their whiteness will save them from their trials. Upper class folks want to maintain their greedy imperialistic privilege that is predicated on whiteness. Then you have a bevy of white supremacists whose entire identity is based on the construct of white, “caucasian,” superiority above all other “races” of men and women especially blacks or Africans. Someone should tell them that the only “caucasians” on earth are in the Eastern European nation of Georgia among the Caucasus Mountains. White supremacy is the greatest lie in the world and must be put in its rightful place: an unmarked grave.

Fundamentally, the presence of a black man in the White House signaled the end of white supremacy for many along with the fact that by 2050 the majority of the United States will be people of color, placing the historically white majority in a minority position. Hillary Clinton, however, as a self-assured, powerful, respected white woman was the last straw. To the mind of a sexist white supremacist, having a woman president signaled the end of white male domination. And the women in their lives agreed by protecting their small egos with their own votes.

Lest we forget, the civil war, that ended chattel slavery, was the bloodiest war in U.S. history. Just as Ava DuVernay’s brilliant documentary, timed with this election, 13th, illustrated to a stunning degree, whenever white male supremacy is challenged in America by the liberation of black people, there is a swift and coordinated destruction of that forward movement. Since the civil war Black people have endured sharecropping, Jim Crow and mass incarceration so that white supremacy could reign. Today America has a black president, something very few people foresaw. As President Obama prepares to exit the White House, attempting to pass the baton to former colleague and friend Hillary Clinton, their partnership reads like miscegenation or worse...equality. White supremacy cannot abide.

However, unlike previous moments in history, the election of Donald Trump is not just the preservation of white male supremacy that threatens the lives of people of color, women and other minorities in America. No. This election threatens all of us the world over. We citizens of the world are deeply and inextricably connected whether through financial markets, resources, media, tourism, or deeply problematic neocolonial ties. Not to mention, our residence on earth as we all battle climate change.

The stakes are high my friends. A great deal of the western world has moved to the right in the face of self-created financial ruin and migration crises. As a friend recently reminded me, Greece has a legitimate Nazi party in Parliament. Indeed, America is following a trend of men feeling themselves losing ground and white supremacy’s last gasp. Male domination, white supremacy and its bedfellows (racism, sexism, classism, xenophobia, homophobia and transphobia) have led to numerous wars, overpopulation (by denying reproductive rights), refugee crises the world over, climate change, and now Donald Trump, leader of the most powerful nation, no, EMPIRE, in the world. To quote myself, “ I'm not having it,” are you with me?

Agunda Okeyo is a writer, producer, filmmaker and activist born in Nairobi and raised between New York City and the Kenyan capital. Follow her on Twitter @AgundaOkeyo.