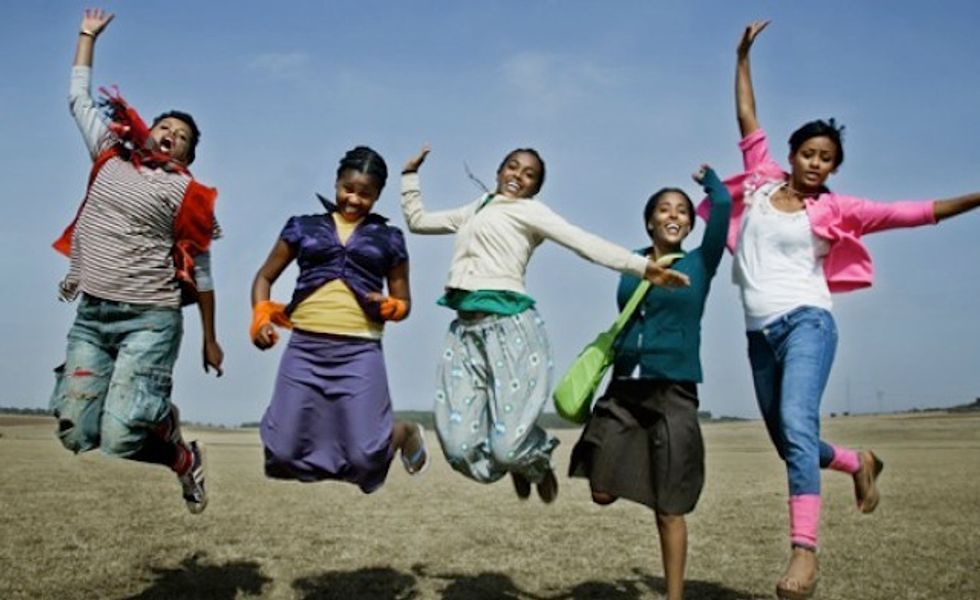 In case you missed it, the UK Department for International Development and Girls' Hub (Nike) recently presented their very own version of the Spice Girls in Ethiopia. The combination of a campaign for girl's rights and a music campaign might seem a bit cheeky — but the response to the new power group Yegna and their hit single "Abet" featuring Haile Roots (above) suggests that the campaign is welcomed by audiences throughout the diaspora. Yegna means "ours" in Amharic and the campaign has been specially designed to "provide positive role models for Ethiopian young women and girls through music, radio, drama and so on. Since the project consists of a radio drama, it tells the story of 5 young women from different walks of life whose shared love of music creates an unlikely friendship that each character draws on as she faces different challenges.

The radio drama consists of 13 episodes launched on Sheger102 FM station. Each episode will have its own music video, with music composed by Abegaz. The drama will be followed by a radio talk show, where people can phone up to join in. The final product is what campaigners call “Yegna Box” –  a sort of toolkit, where five girls will be handed out games that will help them develop life skills and advance education, and this will be piloted in 15 locations outside Addis Abeba.

In addition to media aspect of the initiative there will also be "an army of 600 young girls" brought in from colleges in Amhara Regional State, who have been designated the title of ambassadors to promote girl empowerment in their own communities. This project seems like a more practical and active way to address girls running the world, rather than just singing it — over and over again. But the idea does leave us with a few questions. While the original Spice Girls remain influential and popular enough to come out for a World Tour whenever they choose- we think it's fair to say that their model perhaps does not best serve as a template for positivity in young girlhood, particularly within a specific Ethiopian context. In many ways it appears that the initiative is cognizant of this and rather, the tagline "Ethiopian Spice Girls" is being called upon to create visibility for the project but not necessarily indicative of what Yegna truly signifies.

The Yegna project seems like what the Spice Girls wish they could have been in terms of girl or female empowerment (Girl power had many moments, but in reality the idea was somewhat empty and a commodified way to help build the brand that is "The Spice Girls"). Yegna is a creative way to campaign for girl's rights indeed, the question now is how will this translate into material change for young girls and women in Ethiopia- but of course, this is just the beginning.