Yemi Alade’s Journey to Becoming a ‘Woman of Steel’ 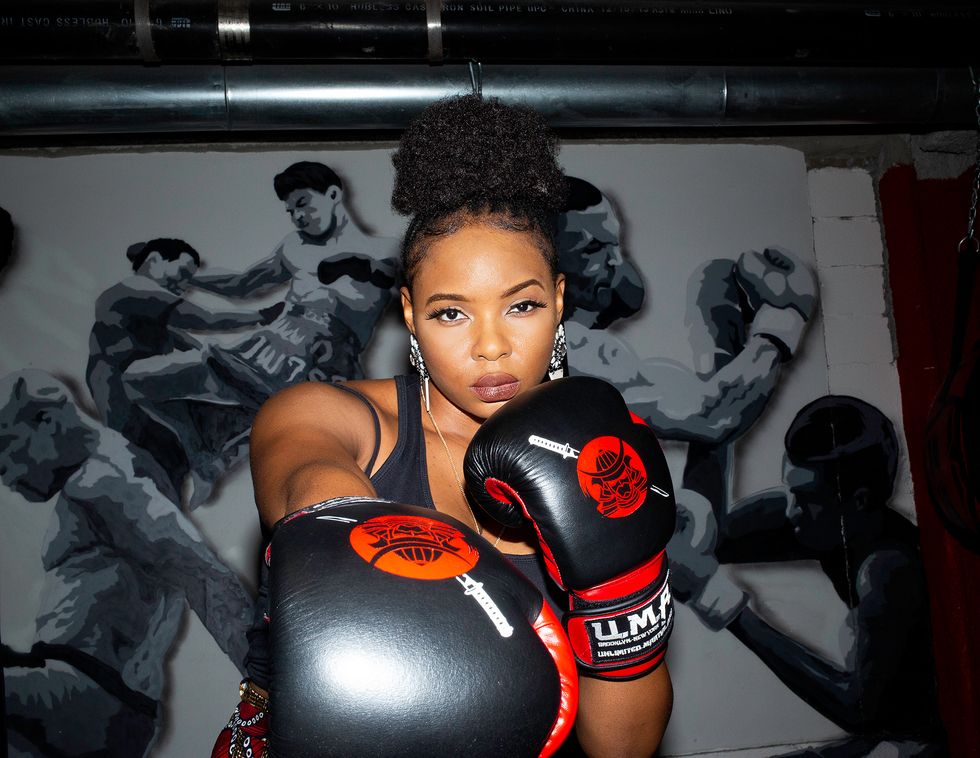 With a bold new album, record-breaking musical feats and two features on Beyoncé's "The Lion King: The Gift," Yemi Alade is claiming her spot in a growing Nigerian music scene with full force.

Yemi Alade's "Johnny" was never even meant to see the light of day. "Someone leaked the song," she recalls with a smile. "And the leaked song saved my life."

It went on to become her breakout hit, catapulting her to African musical fame. With its catchy hook and cheeky lyrics about tracking down a flaky lover, the song caught on easily as a fun track that light-heartedly spoke from the ladies' point of view—an answer to all the songs that already did so from a man's perspective, namely Wizkid's "Caro." Its Clarence Peters-directed music video, which showcased her personality and knack for theatrical performance took the hype even further. It went on to break YouTube records (with 107 million views and counting), and is still the most watched music video by a Nigerian woman artist.

That was 2014—a time in the African pop scene, when artists who are today considered afropop royalty were still striving to make names for themselves in an ever-changing musical landscape. With its fiery production and easy-to-sing-along-to hook "Johnny" quickly became a party staple, making Alade's name one prominently associated with the growing scene. In 2019, African pop music is in a different phase, more visible than ever before, yet still on the cusp of crossover success. Through this process, Alade's name has remained a constant, and unlike the success of "Johnny"—this is by no accident.

The singer is dressed casually in sneakers and a pair of ankara-print shorts when I meet her at the OkayAfrica office in Brooklyn. She's in town promoting the album and her latest single, the remix of "Oh My Gosh" featuring American rapper Rick Ross—her fellow Sovereign liquor ambassador. She sits down comfortably for a cup of champagne that her team brought along for sampling. She was last in the office, she tells me, in 2016, to shoot the cover of Mama Africa with the Nigerian artist Laolu Senbanjo, which explains why she feels so familiar. The tidbit also puts her growth since then into perspective.

A decade ago, the singer made her debut as the first-ever winner of Nigeria's Peak Talent Show. It marked the beginning of her musical career, but visibility came after she released her debut album, King of Queens in 2014. The album won her the Best Female Artist trophy at the MTV Africa Awards in 2015. She followed that up with 2016's Mama Africa and 2017's Black Magic, both standouts in their own right. She's been dubbed the "Nigerian Queen of Music Videos," for her consistency in delivering visually striking, high-energy videos like "Tumbum," "Ferrari," "Oga" and her most recent "Bounce," a pulsating track that she says she made to give her fans something to dance to. She's undecidedly engaging on screen, and her music video prowess is further displayed by the numbers themselves. Nearly all of her music videos from the last five years have views in the several millions and in July, she broke yet another YouTube record, becoming the first African woman artist to amass a million subscribers on the video site.

The video she's most excited about though, hasn't even been released yet. It's for the track "Shekere," which features the legendary Benin singer Angelique Kidjo, and has been two years in the making. "It's my favorite because I finally got to work with someone that inspired me while growing up and still inspires me, and is still achieving heights that I want to achieve as an African woman," she says.

It's clear that Alade is hungry to reach full icon status much-like Kidjo. For 10 years now, she's been duking it out in a space that is notoriously hard on women. While multiple male artists have been allowed to coexist in the same space (despite any obvious overlap in their look or sound) it's almost expected that there only be a handful of women in these same positions. A sort of industry quota. Alade is one of just two female artists who commonly get labeled the "Queen of Afrobeats"—the other, being fellow Nigerian star Tiwa Savage. For her it's not a competition, and the only labels she cares about are the ones she's bestowed upon herself. One of them being "King" and the other "Mama Africa."

"Every other title is not important to me because I'm here to sell music. I'm not here to sell titles," she asserts.

Alade named her album Woman of Steel, to reflect the tough veneer that she, and most women, are often required to wear in order to command the same level of respect as the guys. Though she's often expressed her power by referring to herself as "King" and "Oga," she's quick to assert that exuding female strength is not simply about channeling typical male machismo. "Woman of Steel is all about drawing the inner strength that you have in you and being the superhero that you've always needed," she says. And part of being as hard as actual iron, is breaking free from the confines of having to be exceptionally "tough" all the time and feeling free to tap into womanly instincts. It's about finding power in various expressions of womanhood: hard, soft, or otherwise. "There are important, delicate things that we need in this world," she says. "We need all the things to be who we are. I don't think the world should be trying to tell us, we're too emotional, or too this or, we're too that. No, we are exactly what the world needs."

"I think I sort of just got tired of being told to stay silent on certain topics."

The album also represents a newfound freedom for the artist—an unburdening of having to hold her tongue. What changed for her? "I think I sort of just got tired of being told to stay silent on certain topics," she says. This sees her tackling various subjects in imaginative ways. There's a reggae song that tackles political corruption called "CIA (Criminal in Agbada)," and a cheekier cut about needing a man who can feed himself first before asking her out for dinner, in which the artist, who turned 30 this year, also addresses something many young African women in her age group can relate to: being bombarded with unwarranted questions about marriage (yes, even she gets them). "Since people are bold enough to walk up to people and ask them about marriage, [I thought] why don't we cross this point in the music."

The album not only represents a thematic shift for the artist, but a personal one too. She's headed in bolder direction, she says and those who oppose will easily get left behind. "[Other people's] opinions of me did not get me here," she says. "And opinions will not take me where I want to go." Where she seems to be "going" is upward. She's one of the leaders of a Nigerian music scene that's quickly breaking new ground. "The Nigerian industry is literally on steroids," she says. "And it's changing in forms and dynamics that you need to sleep with your eyes open so you can catch the next wave"

When I ask her about what is necessary to bring the music to full global mainstream consciousness, she makes a case for increased internet access and engagement from those on the ground. "The minute the entire [continent] is able to access the internet more freely, in a more affordable manner. That's when we'll becomes entirely a resource," she says. "Our music is already a resource as needed. But our numbers are not. For instance, Davido has about 12 million followers on Instagram, and he's the most followed artist in Nigeria—in Africa. But Beyoncéhas like [130 million]. Basically we are dealing with only one-tenth of what [American artists] have. If we have more exposure, we'll have just as much numbers."

While the masses might still be playing catching up, it's clear that not everyone is snoozing. It seems Beyoncé herself has been paying attention. Since we spoke, the musical megastar released The Lion King: The Gift, a compilation album, that she described as a "love letter to Africa," featuring the who is who of (mostly) Nigerian artists. Alade appears on two tracks: "Don't Jealous Me" alongside Tekno, Mr Eazi and Lord Afrixana and "My Power." With Beyoncé's mammoth platform as a vehicle, it appears increased visibility is surely coming. "I recorded a couple of songs and two of the songs made it to the album," Alade told Billboardof her involvement on the album. "What a time to be alive. I have always prayed to be ready for opportunities like this," she added. As a woman of steel, it's clear she's fought for them as well—it's what the title demands.

And as the contemporary sounds of the continent continue their much-anticipated global ascent, Yemi is poised to remain one of its fiercest faces. She's fought for her position, gloves on and all.