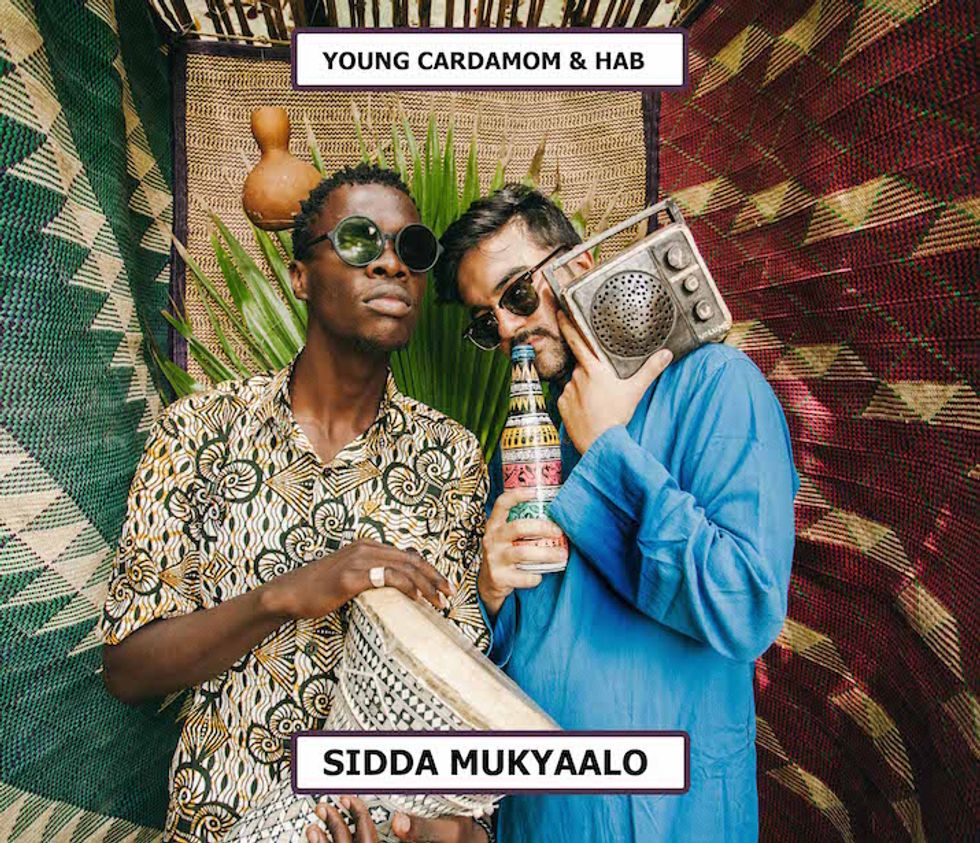 Young Cardamom & HAB are both Ugandans with roots that reach far beyond their borders.

In their latest EP Sidda Mukyaalo, Young Cardamom & HAB address a wide range of concerns faced by modern day Kampala, from the deep roots of Uganda's current political crisis, to the place of South Asians in Uganda and issues of brown and black relations within the country’s society.

Being the bright talkers that they are, we asked Young Cardamom and HAB to chat amongst themselves and present their new EP. Read their conversation below and stream Sidda Mukyaalo in its entirety.

Young Cardamom: Yes, hello! We are too excited to share our debut EP Sidda Mukyaalo with you all. 'Sidda Mukyaalo' is Luganda for 'No going back to the village.' We thought of the title a few weeks ago when we saw a boda [motorcycle] driver dressed in leather, head to toe. As he turned around, we saw that he had written 'NO GOING BACK TO THE VILLAGE' on the back of his jacket.

I can’t go back to the village because, as an Asian Ugandan, I simply do not have any village. The city is all I have.
HAB: To me, I have a village but I can’t go back there right now. I have to work hard so that by the time I return, I come back with something. If I went back now, there are no jobs for me. While much of my family is back in the village and it’s a place I hope to help, Kampala is the greener pasture of Uganda. The economy of the village is agro-based, and what I do is not Agro-based.

YC: At least until we release a rap album on farming! But yes, the EP is focused on stories of Kampala, or rather of our Kampala. I add the emphasis because the way the two of us interact with this city is different from the general perspective of it.

HAB: We rap about Kampala as a place that has people from all over the country and from all around the region as well.

YC: This is why we rap in six different languages – Luganda, English, Hindi, Swahili, Runyoro, and Nubi. People don’t associate all these languages with Kampala, but for the two of us, Kampala cannot simply be lived in Luganda or English.

HAB: That’s right. Two languages can’t describe the whole city, but it’s a touch of every culture and every ethnicity from within and outside that brings out the true nature of the city.

YC: And that’s something that the two of us can speak to personally as we both hail from communities thought of as outside the typical Ugandan identity, communities that have their own languages and customs. I am a 3rd generation Asian Ugandan whose family came to East Africa in the early 1900s.

HAB: For me, while I am partly Munyoro, I identify myself as a Ugandan of Nubian descent whose origin is traced from the old days of colonialism when we were brought to Uganda as colonial soldiers from South Sudan. When I say I’m Nubi, I’m referring to the community that, after colonialism, remained within Uganda and formed the Nubian community here.

YC: Hey, colonialism made this group!

HAB: They didn’t see that coming!

YC: Yo yo yo. And that’s one of the many themes of Sidda Mukyaalo: the legacies of colonialism. "Askari"—which means security guard in Luganda—is a song where we play with post-colonial societies’ lasting obsession with and valuing of whiteness.

HAB: People see a white guy and many think they are heaven sent and consider them more worthy of respect than a black person.

YC: This even reminds me. A few weeks ago, HAB and I were going around Kampala looking for locations for the “Wabula Naawe” music video. We met a lady who, like most people in Kampala, mistook me for a Muzungu (white man). She sincerely told me that white people are incapable of lying. I quickly corrected her!

HAB: In “Askari,” the story revolves around this belief. The askari opens the gate for a random white guy to enter after the owner, who is a rich black man, leaves his home. This is simply because, in the askari’s mind, the white guy can’t steal and must be telling the truth.

YC: This song came out of our personal experiences. Whenever any of my non-black friends or family come home, the gate swings open immediately. When it’s a black friend or family member, it always takes a bit longer.

HAB: Questions like 'Who are you?' 'How are you related to the boss?' 'Why of all gates did you see this one?' That’s always the word I get from the askaris.

YC: And it’s not to say it’s their fault, this is simply the lesson that Ugandan society teaches all of us. White is always right.

HAB: White is actually gold here. So this makes me wonder. Us, the blacks, are we copper? Are we silver? Where do we fall? And this is all because of our society.

YC: You see this a lot in Kampala. When the two of us go anywhere with security, guards let me walk straight through and double check HAB.

HAB: They even try to lift my untouchables to see if I’m hiding anything bombastic there. They believe that Young Cardamom is harmless, but me!

YC: You guy. And it’s also interesting because in the U.S., where I’ve spent much of my life, it’s the opposite for me. There, security clearly understands me as brown and Muslim and so views me as a threat.

HAB: We also talk about race in “Chotti Bahu,” which features the fantastic Ali Sethi and is named after an Indian TV serial that’s popular these ends. It’s set in a supermarket and, for our first verses, I play a black Ugandan cleaner and Young Cardamom playing the Indian supervisor. In our second verses, I play the wealthy black Ugandan man and YC plays a wealthy Indian Ugandan. We featured this kind of a story because this is an issue that can’t be ignored.

YC: This song focuses on the issue of brown and black relations within Ugandan society, with the first verse looking at it from lower-income to middle class perspective, the second verse from the view of the elites, and the last our own thoughts on the issue. And as HAB says, this issue of black and brown relations in Kampala is one that cannot be ignored, and yet at the same time there is not much public discussion of it. It just lies underneath the surface, bubbling up from time to time. This song is our attempt to address the issue head on.

HAB: We also do a similar thing in "Obulamu,” where we try to throw light on the issue of corruption. My verse focuses on how we have many helpless people in Kampala yet the funds that would be used to help them are instead feeding those who already have plenty. And it’s also about the issue of bribery, where if a poor guy wants to apply for any job, he would have to add money to that letter before handing it in. You have to put a bribe to add “weight” to the letter, otherwise it’s considered as light as a feather.

YC: And as HAB focuses on the symptoms, I try and look at some of the roots. I come from a well-off family and so I’ve crossed paths with children of similar means, whose parents are wealthy businessmen or politicians. A lot of their conversations are peppered with complaints of Uganda’s political climate, complaints that are deaf to the fact that their own families have either helped to create or sustain the status quo.

HAB: But I don’t want you guys to think that we are ever serious, we can also be a bit mad.

HAB: Uhuh. Like in “Wabula Naawe,” the two of us have a rap battle and I really believe I won.

YC: What do they say? If you fight with a pig, you’ll both get dirty. Let me keep my clothes clean and leave you. But yes, the song came out of this moment in Ugandan hip-hop when these two rappers had a public back and forth about who was the best Ugandan MC under 25. There were some trash talk, diss songs, and the usual twitter fingers.

HAB: So for us, we decided to invite ourselves into this battle, and do it in our weird stylo. Then for the other songs on “Sidda Mukyaalo” we talk about taxis, whereby we rap as the taxi driver, conductor, and passengers, and we also just let people know who we are. So that’s who we are, what we do, and why we rap. Thank you Okayafrica – one love!