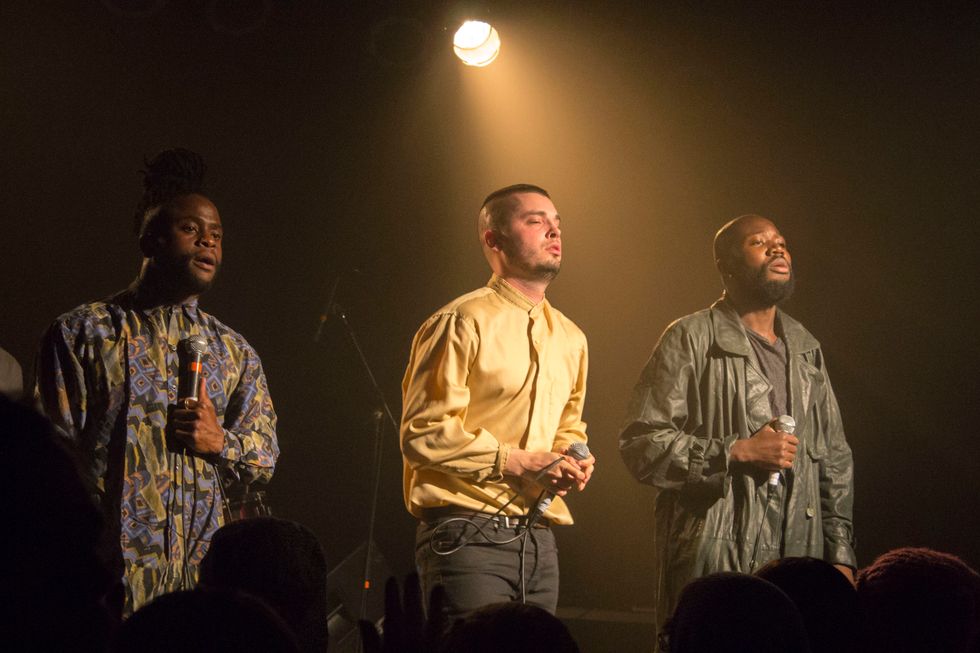 The band was disinvited from the Ruhrtriennale festival after refusing to distance themselves from the "boycott, divestment and sanctions" movement, or BDS.

Last week in a vague and mealy mouthed statement, the Ruhrtriennale festival's Artistic Director Stefanie Carpannounced that they would be canceling Young Father's concert because of the Scottish group's refusal to distance themselves from "Boycott, Divestment and Sanctions," or BDS—a movement that advocates for the human rights of Palestinians.

"Regrettably, the Young Fathers have not distanced themselves from BDS. We explicitly do not conclude from this that the band is anti-Semitic, and, in this context, I consider it important to emphasise that criticism of the policy of the current Israeli government is not per se equivalent to anti-Semitism. However, the Ruhrtriennale distances itself in all forms from the BDS movement and wishes to have absolutely no connection with the campaign. We have therefore decided to cancel the concert. We regret this immensely, because the Young Fathers would have set an important tone in the programme of the Ruhrtriennale."

The announcement coincides with attempts by pro-Israel groups to paint the BDS movement and its supporters as fundamentally anti-Semitic. This has led to a wave of anti-BDS legislation in nine American states and in other jurisdictions which opponents decry as censorship. New York State's governor Andrew Cuomo famously wrote "If you boycott Israel, New York will boycott you" before signing an order saying no state agency or authority will engage in or promote any investment activity that would further the BDS campaign.

In response to the cancellation of their show Young Fathers released a statement through Artists For Palestine UK saying among other things that:

We support one of the only peaceful protests a person can take, in the hope to achieve a just and comprehensive peace that allows Palestinian refugees the right to return to a safe homeland, and that allows Israelis and Palestinians of all faiths (and none) to live together in peace.

Today Carp announced a reversal to her edict banning the group from playing and said she is re-inviting the group to play the August 18th concert in Bochum, Germany.

Read the statement below:

Bochum, 21 June 2018 - The programme of the Ruhrtriennale is directed against racism, anti-Semitism and exclusion in every form and tells complex narratives. I consider it important to open up perspectives other than our Western ones, and thus to take the context of our international programme seriously. I do not wish to be part of a campaign, let alone hostage to a campaign.

The programme of the Ruhrtriennale and the artists of this programme are currently under pressure from two campaigns. One says: artists who support organisations that oppose the current policy of the government of the Israeli state and support the rights of the Palestinians are automatically anti-Semitic. The second campaign is the BDS campaign, which says that artists who do not boycott the current government of the State of Israel are automatically suspected of being racist or opponents of the Palestinians. I do not share any of the superficial, simplifying positions of these two campaigns. I wish to be able to invite a band such as the Young Fathers for their music and their lyrics although I personally completely reject the boycott strategy of the BDS. As a German, it is, of course, difficult for me to be linked to a movement that boycotts Israel, but I have invited the Young Fathers and not the BDS. In many interviews, the Young Fathers have made it credible that they reject anti-Semitism in any form. Following the impression of many discussions and reflections over the last few days, I would like to correct my approach: I wish to invite the Young Fathers again to the concert in Bochum on 18 August 2018 although I do not share their attitude to the BDS. I believe that we need to allow the different perspectives and narratives, because this openness is the dramaturgic credo of our programme. I therefore have to defend the freedom of the arts, and do not, under any circumstances, even indirectly, wish to exercise censorship.

I again wish to stress that, in my view, criticism of the current policy of the government of the State of Israel is not automatically anti-Semitic. None of the artists at this year's programme of the Ruhrtriennale are anti-Semitic or racist. I personally reject boycott in connection with Israel, but also in other contexts, and especially in the field of art. Artists do not represent nations or ideological discourses.

I do not, however, want artists to be censored, lectured or excluded for their attitudes. Every artist is free to take up a position as long as this position is not anti-Semitic, racist or exclusionary. I wish to initiate a public event on the topic of boycott, freedom of the arts and the differences of perspectives, the place, time and implementation of which we will announce. Perhaps such an event could be held in the context of the concert, and the band could preferably represent its own position there.

No word yet on whether Young Fathers will accept the new invitation after their treatment by the festival. OkayAfrica has covered the group extensively before for their unique melding of hip-hop, punk and experimental pop. Check out this stripped down video we did with them for their song "Only Child," below.