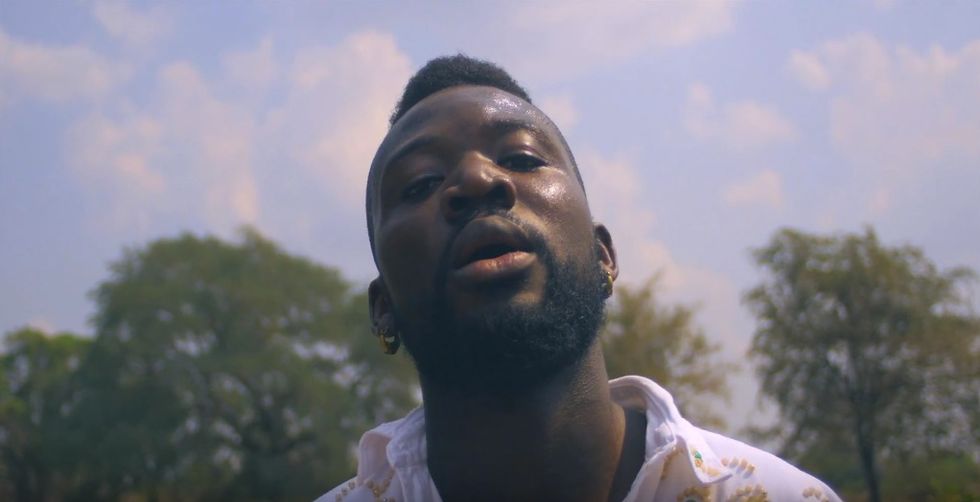 In September, Young Fathers touched down on the African continent for the second time in 2015 to headline Malawi’s Lake Of Stars festival in Mangochi. While there, the Scottish/Liberian/Nigerian trio shot a video for White Men Are Black Men Too's “Old Rock n Roll,” a jarring, unapologetic take on racial identity and post-colonial relations:

The song’s self-directed video sees bandmembers Alloysious Massaquoi, Kayus Bankole and ‘G’ Hastings bring their haywire dance moves to Chipoka, a village in the Central Region of Malawi, where they’re joined by a group of young Malawians and incredible Gule Wamkulu dancers.

A press release explains the making and meaning behind the clip:

“Malawi is famous for being poor. It’s not famous for the psychedelic Gule Wamkulu dancers or the life spirit that emanates from the people. YFs took a camera there when they went to play the Lake of Stars Festival in September. It was always going to be a video for Old Rocknroll, the track on album White Men Are Black Men Too that links the USA to the UK to Africa, the old slave trade triangle, made audio.

Old Rocknroll seems like an angry song. It’s not angry, it’s desperate. A multi-layered attempt to come to terms with preconceptions - what’s expected from a black man in the west. The black man as a cypher for all that nasty shit encapsulated in MAC’s cartoons previously mentioned, but also for the assumptions made by those who expect anger. Spike Lee asked, why can’t I just be a film director? Why does the description always have to have ‘black’ tagged on to it?

What YFs are asking here, why can’t I just be a singer, a performer? Why do I need to be boxed and presented? Just to be, is the greatest freedom.”

In the press release, the group explain that they waited to share the "Old Rock n Roll" video until they had permission from Chipoka Village’s chief–who happens to be a woman.

When the video premiered via The Guardian today, the band shared a statement on “acceptance, cultural appropriation and the lineage of rock’n’roll” that also touches on the current refugee crisis. The message comes on the heels of Young Fathers’ run supporting 57-year-old British rocker Paul Weller:

“In the midst of this UK tour, while Britain First are trying to spawn all over the internet, while politicians and press fight to expectorate the most poisonous, anti-immigrant ignorance, we give you Old Rock’n’Roll, a journey across centuries, bringing it back to Africa, to Malawi, bringing the faces and sounds of humans, migrating, because they are captured or scared or hungry, as they always have done. And we’re saying, it’s alright. In the heart of the Congo, it’s alright.

Old Rock’n’Roll. Not what you’ve been told.”

Watch Young Fathers' "Old Rock n Roll" video below. In related news, the Edinburgh trio make an appearance on our just-published roundup of the Top Songs of 2015.