In Conversation: BBC Host Zeinab Badawi on Her New History of Africa 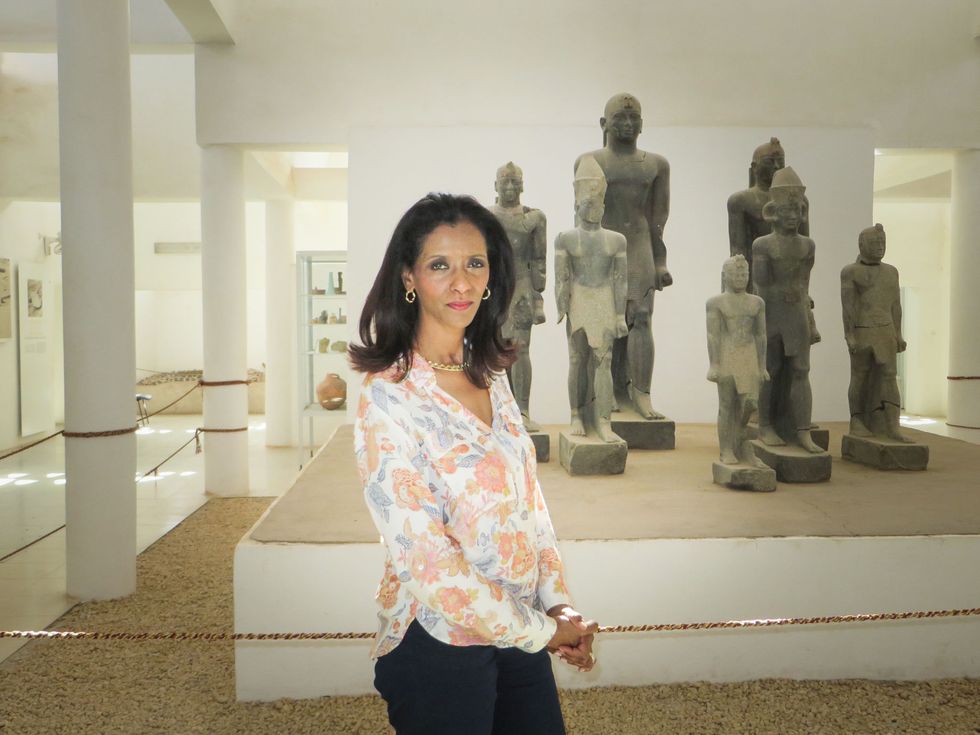 An exclusive look at Zeinab Badawi's new TV series, The History of Africa.

“For a long time” says Zeinab Badawi “it was the view that because Africa didn't always write, or have written document for his history that means Africa didn’t document its history. That is not true”.

History of Africa with Zeinab Badawi is a 9 part series aired on the BBC and produced by Badawi’s company Kush Communications. It spans from early human development in Africa to the 12th century with future series likely to continue from there.

The series is based on The General History of Africa volumes compiled by African scholars under the auspices of UNESCO. The 8 volumes that make up the collection begins from “prehistory” with chapters on prehistoric art, agricultural techniques and the development of metallurgy to the eighth and last completed which “examines the period from 1935 to the present day”.

Inside the Kushite pyramids, Sudan. Curtesy of Kush Communications

A ninth volume, launched in 2013, has a stated remit which is “covering the recent history since the decolonisation, the end of Apartheid and the place of Africa in the world”. The collection of volumes, says Badawi, “is a very important one because it’s the philosophy underpinning” the History of Africa series.

“Everybody interviewed was African” says Badawi of her bid to ensure that the intellectual heft was not an import from the same western countries historically responsible for the restoration job she has embarked upon, also adding that “whether they’re white, whether they’re black, the point was that they had to be African. That was very important to me”.

The conscious decision to fully utilise the expertise in the nations where she filmed goes even further. Rather than take with her a film crew from the UK in what is usually an unchecked belief in the superior expertise from the so called developed world, Badawi employed camera crews local to the sites she visited.

One reason for this is that a cameraman local to a place is likely to have practical knowledge of weather and lighting conditions which a foreigner may not possess.

Another reason is that of familiarity and the ease it brings when subjects in, say, Zimbabwe are interviewed by a Zimbabwean with a better command of the language(s) and mores.

Mandela’s maxim rings true here, "If you talk to a man in a language he understands, that goes to his head” which could make an interview subject more forthcoming enriching any research material.

The third reason is that of technical know-how “I knew from my experience that Africans are very technically savvy and now filming equipment is so technically driven, so it made sense for me to use people who were technically very very adept. I mean they were brilliant at using drones”.

For the fourth episode titled “The Kingdom of Kush”, Badawi visits the site of about 1000 pyramids, many of which are still intact in present day Sudan where Badawi is from, “I love all the history but for me there was an extra layer when I filmed in the Sudan because of the story of my forefathers”.

In fact, Badawi’s great-grandfather, Sheikh Babiker, pioneered girl-child education in Sudan going on to found the Al-Ahfad University for Women in the capital city of Khartoum.

Badawi was two when she and her family moved to the UK when her father, a newspaper editor in Sudan, joined the BBC Arabic Service. It is true that the History of Africa series is pan-African but filming in her country of birth must have had its own special appeal and it did. “There was an extra layer there because of the deep familiarity” with the country she tells us.

Leaving behind the home comforts of Sudan, Badawi’s travels also take her to present-day Zimbabwe where she looks into man’s turn to farming and the Iron Age, crucial stages in early human development.

A 9 part TV program lasting less than an hour each will struggle to contain the comprehensive history of any one nation state, let alone an in-depth look into it’s people and customs. Fitting the history of the entire continent into 8-9 hours of television is a daunting task, even when this first series doesn't go beyond the 12th century.

Zeinab Badawi speaks to Ahmed Samir, a curator at the Egyptian National Museum in Cairo. Curtesy of Kush Communications

There is an industry of African history educators operating, if not thriving, in London and maybe other parts of the UK. Many of the city’s events about the continent which features literature in its program, for instance Africa Utopia, teems with booksellers whose merchandise and primary objective is to counter and overturn still persistent beliefs and views about the continent and its people.

The obvious reasoning is that knowing that 1000 years “before Christ” one’s ancestors independently smelted iron and led a civilisation said to last 1,500 years, as say the Nok civilisation did (this writer’s own heritage), gives one real perspective. The historian or individual who then says descendants of these same people are without a history is not just wrong but daft.

A recurring problem in documentaries about little known or “explored” people, places and cultures by persons from outside these communities is that of tonal balance. Badawi agrees “I have found that even with a sympathetic rendering tone, in the past we have sought of objectified the African”.

Badawi is a seasoned presenter with excellent presenting skills, as evident on BBC Global Questions and HardTalk which she hosts.

Her manner of speaking, all warmth and elegance, is similar to that of a good number of explorers who have been British and are of a particular education and social class also similar to hers.

Put simply, it is reminiscent of “EMPIRE” even today where the word “Great” before Britain seem like a childhood nickname that in adulthood is a little embarrassing.

These are associations some viewers are likely to make but questions about it are tricky to ask especially when Badawi has clearly made the series with the best intentions.

“It’s not one I’ve been asked before so I commend you on it” says Badawi going on to add that “I made a conscious decision that I wasn't going to try and say to people that these are as impressive as anything I’ve seen anywhere in an Italian museum. It’s just saying look, plain and simple. This is what's going on. This is what’s being made”.