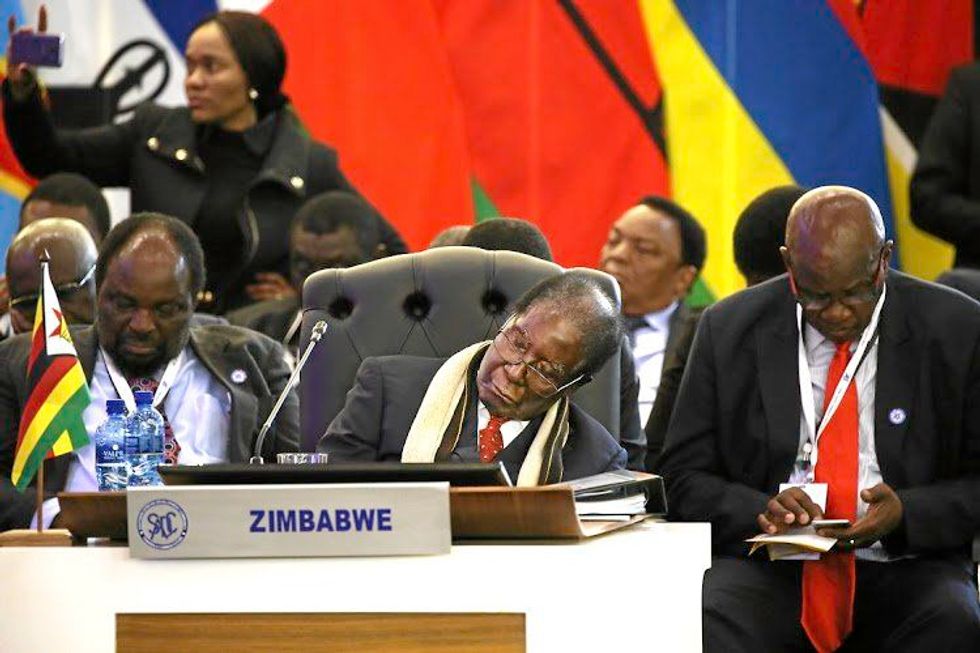 Robert Mugabe openly criticized Donald Trump during his speech at the UN on Thursday, but the hypocrisy is too much for some folks to ignore.

Robert Mugabe gave an inflamed speech at the UN General Assembly on Thursday, where he openly criticized Donald Trump, stating that he was "embarrassed" by the president's stance on North Korea.

"Some of us were embarrassed, if not frightened by what appeared to be the return of the Biblical Giant Gold Goliath," said the ailing leader.

"Are we having a return of Goliath to our midst, who threatens the extinction of other countries?" he continued, prompting light laughter from people in the audience.

"And may I say to the United States president, Mr. Trump, please blow your trumpet—blow your trumpet in a musical way towards the values of unity, peace, cooperation, togetherness, dialogue, which we have always stood for and which are well-writ in our very sacred document, the Charter of the United Nations."

You can watch part of his speech below, via BBC Africa.

While we don't disagree with what Mugabe's words, they mean very little coming from him. We can't quite recall him ever upholding such values through his leadership either.

While some are applauding Mugabe's very diplomatic shade throwing—we get it, we're always here for a Trump roast as well—many, especially Zimbabweans, are calling out the glaring hypocrisy in Mugabe's speech.

Not many are buying his message of "global peace and unity." Here's some of what folks are saying on Twitter:

The only thing I admire in Mugabe is good mastery of English..end

He shouldn't lecture the world about anything else 😠✋

Irony - decimating your country and suppressing opposition, yet having the nerve to 'advise' another head of state on peace. Go figure. 🙄

And Mugabe preaches anti-imperialism at the UNGA while Zimbabwe is now a Mugabe family empire.

Following his speech, Mugabe appeared evidently frail, as he struggled to descend from the podium on his own, once again sparking conversations about his health. The 93-year-old head of state has also been photographed with his eyes closed, appearing to be sleeping during events, most notably during Donald Trump's opening speech on Tuesday.

Trump: Zimbabwe, my timeline said that you all slept during my HUGE speech on world stuff.