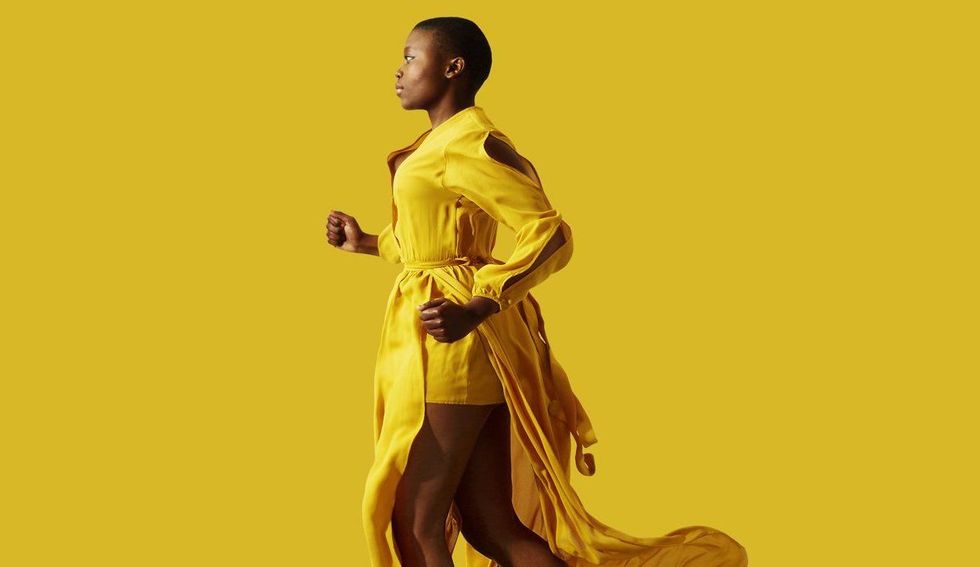 Things are out of hand in South Africa. President Jacob Zuma's cabinet reshuffle has sent the country to junk status, leading to one of the most ridiculous protests of our time. Conspiracy theories are being thrown around so quick it's so hard to make sense of everything that's going on. And that's just the tip of the iceberg.

Then comes the young jazz artist Zoë Modiga with her debut album Yellow the Novel, which has been out for about two weeks now. It's a needed happiness pill and reminder to love yourself and to keep that smile on your face through all the turmoil. The artist responds with a mild smile when I tell her that that's how I see her album. “Yellow is my favorite color," she says of her album title. “When I think about yellow I think about this constant pursuit of happiness. And I wanted to associate my debut album with happiness. Because it's such an honor to even say my body of work is out. It's been two years and counting."

Yellow the Novel is an extension of Zoë's personality. She's one of the most genuinely jovial people I've met. She will blow bubbles or balloons on stage to create a fitting aura during her live performances. “I'm a melancholic person who's always trying to pursue happiness," Zoë' says. “And because I'm trying to pursue it, I'm embodying it all the time."

On the album, she encourages self-love in a subtle way, with lines like: “I'm a little fish in the sea tryna swim in my little part/ Don't be amused because we all tryna look while we backstroke" (on the song “Uh Oh [Sensible Life]"), “It's not some self-love mantra/ I just know we not created in vain/ So get into your lane" (“Shake the World").

It's been a great few years for Zoë. Her rise has been short of amazing – I've observed her since she was an up-and-comer, performing in open mics around Cape Town while she was still studying at the South African College of Music (University of Cape Town) between 2013 and 2015, to performing at reputable events like the Cape Town International Jazz Festival and The Joy of Jazz, among others. And oh boy, this woman knows how to give a show.

She won the South African Music Rights Organisation's Overseas Scholarship in 2015, and was a contestant on the M-Net TV show The Voice SA, which she didn't win, but impressed a lot of viewers. She also got to meet Lira, who was one of her coaches on the show and an artist she admires. Lira is now a mentor to Zoë. “Her image and her brand helped me to be able to release my music," she says. “Because there's an idea of a black woman of her nature out there. It's now easier for me to be like, 'We exist already, here's another version of what that looks like.'"

At 21 tracks and 110 minutes, Yellow the Novel, which is a double disc, is extremely long. But it's worth every second of your time. As the title suggests, it's a novel. You need to invest time in it and listen with undivided attention. “It's a novel because it's a long body of work, and I wanted each song to read like a chapter of that book – the intimate experience of reading, I just wanted the listener to experience the album," she says.

Zoë's brand of jazz is, for the lack of a better word, accessible. Songs like “Uh Oh (Sensible Life)", “Love (Yaweh)" have some pop and R&B sensibilities. “I think it's an intentional thing," she says. “I think the disadvantage of being educated is wanting to prove all the tools you've learnt. This project, I wanted everyone to feel like they own it and carve their own experiences of it, and not be so focused on the musicality. I just wanted to move people."

She wrote and composed every song on Yellow, except “Open Your Eyes, You Can Fly," by Chick Corea, a jazz standard, which Zoë re-arranged, and Winston Ngozi's “Yakhal'inkomo," which she covered.

The artist is comfortable in her own skin. She knows who she is as a musician and as a human being, and it's a pleasure just listening to her being herself uncompromisingly. Her outlook on life is a needed inspiration in a world that is constantly telling us what is wrong with who we are, and dictating to us how to go about our lives.

Zoë has a carefree disposition that manifests itself in the form of skits between some songs on Yellow the Novel of the musicians sharing their favorite colors. She gives us a glimpse of what it was like being in the studio recording the project. She recorded the album in Cape Town with three different bands, from both Cape Town and Johannesburg. The album was recorded two years ago, but took this long to get to us because the artist had to do a lot of things herself.

Zoë's a vocal virtuoso— there's nothing her voice can't do – she hits high notes with ease, and varies her delivery—she can sing in sparse dilated sentences, and, on some like “Uh Oh (A Sensible Life)," she packs her words like an MC.

She's linguistically ambidextrous too, excelling in both English and IsiZulu. Songs like “Nantsi Ntswepe" and “Inganekwane," employ folklore. “'Inganekwane' [which means 'fairytale' in IsiZulu] is an implication of folklore," she says. “It was a great thing to be inspired by the high powers to address the issue of heartbreak through storytelling – this was a fairytale, but it didn't end great."

There's a lot to take from the album. I'm still digesting it, and I'm sure I'll make new discoveries.

Yellow the Novel is available on iTunes, Apple Music and Deezer.