#Goals: This Ghanaian Restaurant Owner Is Sparking an African Food Revolution In London 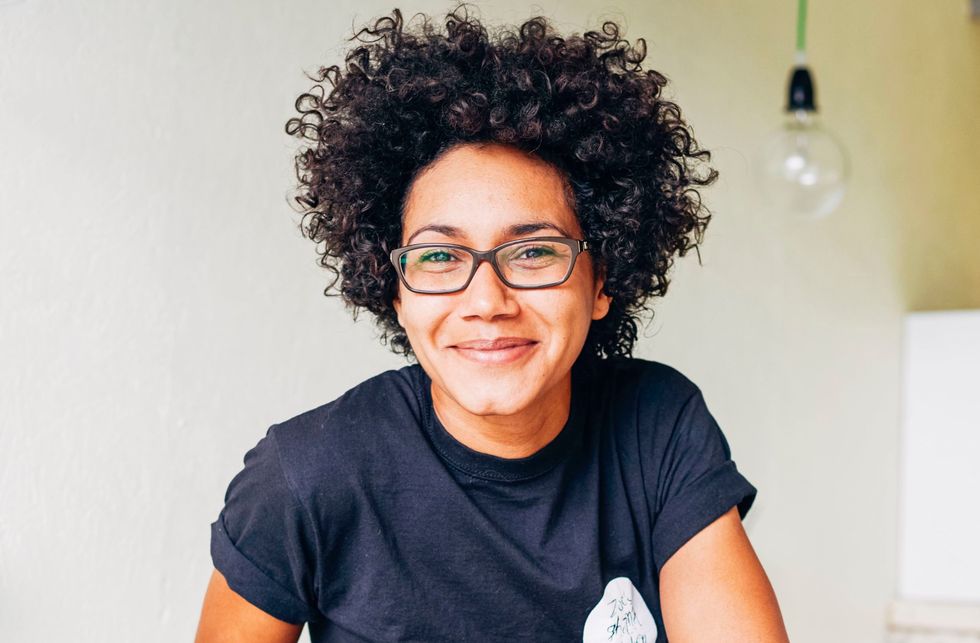 For our latest #Goals installment, we speak to Zoe Adjonyoh about how she's bringing African cuisine to the forefront of the restaurant industry.

During the month of August, we'll be highlighting aspirational folks who are setting major #goals and achieving them, and asking them to share their stories and insight to help motivate us all to “live our best lives."

Previously, we spoke with Nigerian comedian Chief Obi. For our latest installment, we chat with Ghanaian chef and restaurant owner Zoe Adjonyoh. Read our conversation below.

A self-trained home cook, restaurant owner and, most recently, acclaimed cookbook author, Zoe Adjonyoh has been an early pioneer in the African food revolution. In 2010, Adjonyoh launched a supper club that later evolved into a food stall. In 2015, she took a leap and launched her eponymous Brixton restaurant, Zoe's Ghana Kitchen, which we featured on our Best African Restaurants in London list.

Over the last seven years, Adjonyoh has introduced thousands of Londoners to traditional Ghanaian meals remixed for the modern kitchen. Whether British or Burkinabe, people from all walks of life find themselves elbow-to-elbow over a delicious plate of slow-cooked red-red and cassava. OkayAfrica spoke to Adjonyoh in the midst of her book tour about the ingredients behind her success.

Akinyi Ochieng for OkayAfrica: You're a south Londoner and a Ghanaian—beyond the influence on your cuisine, how has your background shaped your outlook on life and business?

Zoe Adjonyoh: I grew up in Woolwich in South East London and I'm mixed Ghanaian and Irish. I'm from a working class family and have always had a job, since my first paper round at age 11 so there's a very strong work ethic built into me, which one needs when running a busy restaurant and catering business!

You have a passion for food, but are a self-taught home-cook. Was the transition from soup stall to supper club to restaurant daunting?

I'm a "say yes then work out how to do it" type of person, so when opportunities present themselves I tend to take them. Taking a step from kitchen residencies to a restaurant didn't seem like a huge leap for me—it was a natural progression of where I wanted Zoe's Ghana Kitchen to go, and it was bound up with excitement and passion so the choice itself wasn't daunting. However, not having a restaurant background meant there was a lot I had to learn on the job: controlling stock and GP, training staff and managing people and suppliers are all part of the job, and can be hugely challenging aspects of running a restaurant beyond designing and cooking menus.

The food industry is still learning about African cuisine. How often did you face rejection about your concept, and how did you persevere?

Since I was delivering a very new food concept I generally found people very open to it. I have to say I didn't really face any rejection of the concept as such. I think the hardest part of this journey has been convincing people that an African Food Revolution was on its way.

The restaurant business is a difficult business even for the most talented chefs. Why do you think you have been successful?

The restaurant and food industry in general is fiercely competitive—that is quite true. But my "unique selling point" has always been about delivering and sharing a personal connection with a cuisine and bringing a passion and determination to share that food with as wide an audience as possible. That started with the supper clubs and street food, and has fused into the cookbook and restaurant concept.

Six years ago when I started Zoe's Ghana Kitchen there wasn't any body else presenting an African cuisine in this way, so I was somewhat ahead of the curve in that respect. I'm glad to say that has changed a great deal in recent years, and there is now a plethora of young modern food businesses expressing a passion for their heritage's cuisine.

You recently launched a cookbook. How did that process lead you to step outside of your comfort zone and what did you learn from it?

My cookbook Zoe's Ghana Kitchen was published in April this year. The writing of it was a labor of love in the small hours between kitchen service, and as a celebration of West African flavors and ingredients. The response has been phenomenally positive, I get messages and emails from people all over the world thanking me for writing it, which is an amazing encouragement to keep talking and writing about foods from across Africa.

What's next for Zoe's Ghana Kitchen?

It's been an incredibly exciting year and lots of opportunities are continually presenting themselves. For now I'll just say "watch this space."