Zumbi's Legacy: Finding African Spirituality in the Heart of Brazil 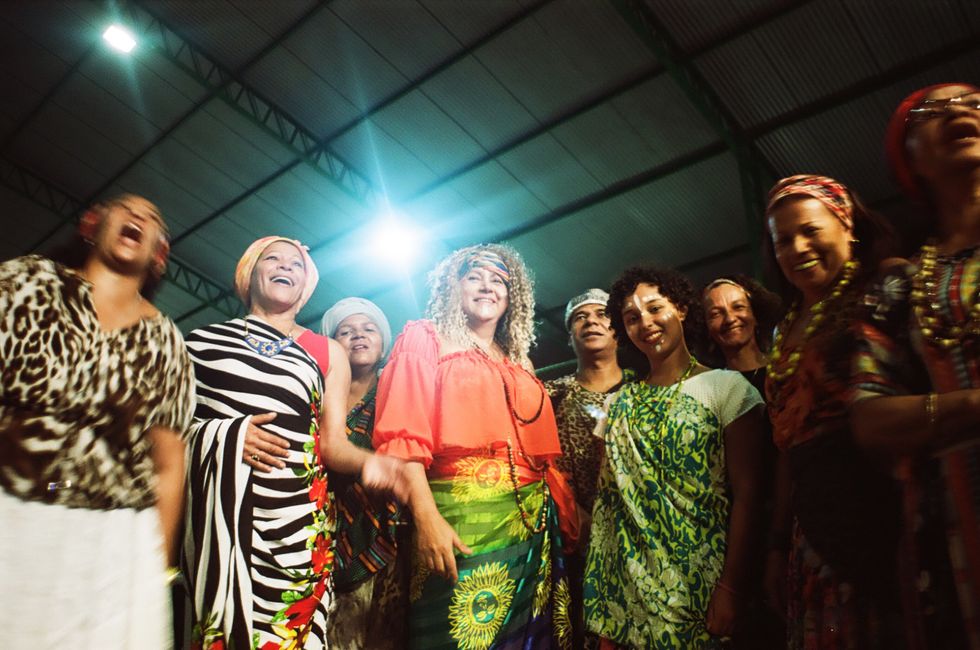 In the geography of the Black Atlantic, the waters of the Paraíba do Sul and the Zambezi intertwine and give birth to a goddess.

A light burst of wind brings me to my feet. To dance is also a form of praise. To the rhythm of djembe drums and musical bows, members of the Afro-Brazilian community on Ilhabela Island dance toward the altar, with red and pink rose petals at their feet, towards the priest, in exalting tones and floral prints, animal prints and wide skirts.

The day is Dia da Consciência Negra, the 20th of November, Black Consciousness Day in Brazil. We are gathered under a roofed and open air public space, surrounded by rainforest, an unknown number of waterfalls, and a small skate park, to celebrate the life and struggle of Zumbi dos Palmares, an anti-colonial and anti-slavery leader descended from West African nobility.

In between clasped and raised hands the participants are carrying homemade bread, papaya, mandioca, oranges, watermelon, mangoes (of course) and many more offerings. At the end of the service, we will be offered these fruits to eat, having been blessed many times over. There is holy communion too. The choir sings, among many others, a Zulu song familiar to me. At this mass service, the altar boys are actually altar girls, and the smiles on faces in attendance are the kind that brighten up your internal weather. The priest speaks of acknowledging roots, on the intersections of Blackness, spirituality and consciousness.

It's painful to admit and yet trendy to discuss, but oppression seems to be a standard of human existence, only enforced to varying degrees by different human beings at different times. As such, every generation has its celebrated leaders who fight for humanity. Brazil's happens to be Zumbi. The legacy of resistance is passed down to generation ad infinitum, from Wangaari to Wynter, Sankara to Fanon, Graça and Lumumba, Fela and Nina.

I am welcomed into the circle, of yellow plastic chairs. A poetic and intergenerational conversation about the history of Blackness here in Ilhabela and Brazil at large is underway. I listen with intent. This is what I am here for.

The festival taking place is political as well as spiritual. In Quilombos such as Palmares which was led by Zumbi during the 17th century according to African ways of being, inhabitants spoke many languages, practiced many religions and were of different origins. Zumbi was thought to be immortal by the masses who followed his path to liberation, which is why the celebration of his undying legacy comes in such disparate and vibrant forms.

I never heard of Zumbi before coming to Brazil, though. In the schools I attended in Southern Africa, we learnt a lot of European history. It seemed more vital that we were conscious of Napoleon and cake-eaters, than Zumbi and the Quilombos.

Imagine—self-sustainable communities of self-liberated slaves, and other indigenous people in the 17th century. Imagine what that legacy of resistance could be constructed as in our present moment? I'm listening, and processing, this entire side of Africanity that I missed out on in my childhood, and feeling so grateful to have sought it out and to be able to share it.

It makes sense that the African legacy of resistance is so strong in Brazil, since it has the highest population of Black people in the world—second only to Nigeria. The African spiritual consciousness is strong too and I felt that as soon as I got to this island. I'm all too familiar here, people look at me like I am a distant relative.

I came here for an artist residency which transplants my Masters research in African Studies, to the context of indigenous and Afro-descendant communities in Ilhabela. Since my research at home entails finding myself through decolonising my history, as seen through the lens of my cameras, I am bound to find pieces of myself here in Brazil.

Slaves, I'm taught, used their spirituality as a means of survival and unity. Having been barred from identifying with their tribal groups and being made to adopt Christianity, it's these more syncretic traditions that remain. I gaze at a crucifix and close by there are wooden masks that are staring back at me. Who is to say if they were brought here from Africa on a plane or carved from the memory of somebody who arrived on a ship, at Praia do Fome, beach of hunger, where slaves would be fattened after a journey across the Black Atlantic, and drank the water from waterfalls flowing still today.

I've been told if you drink the water on Ilhabela, you will always come back, some time.

How can I describe this feeling of looking my ancestress in the eye? Her name, is Nossa Senhora Aparacida, she is known as the "mother of Brazil." She emerged from a river, Paraíba do Sul. She is The Black Mother Mary, and she is worshiped all over Brazil in varying spiritual practices. I am subtly reminded of a figure from my own culture—the Lozi of the Western Province of Zambia. Her name, is Mbuyuwamwambwa, she who all of our litungas (leaders) are descended from, and she, in some mythical oratories, emerged from the Zambezi.

I breathe deeply, flooded by the intertwining of these apparitions of the Divine Feminine, and how my presence here on Ilhabela on Dia da Consciência Negra, continues a legacy of resistance. Did Nossa Senhora Aparacida and Mbuyuwamwambwa conspire for me to be here?

I slip into a memory, my own juncture of Blackness, spirituality and consciousness. My primordial memory of church-going involves me running with my sister, in white stockings and matching dresses (we are not twins). We are in an open field, or maybe it's just a park which my childhood lens maximises the size of everything at play. The tops of the tall trees are dancing in the wind, this always causes deep excitement within me. We are being wild, smiling so hard my cheeks hurt, we jump into a puddle of mud. I like the way the mud dries and cracks on my shiny black buckled shoes, stockings are stained—this is not a good church look.

On Dia da Consciência Negra, on a humid day on an island far away from home and very close to my self, I felt my stockings inverted, and what once seemed like a stain to dampen the aesthetic of worship, is now revered and remixed in ways I did not know possible. Until now. The word is Sincretismo, the amalgamation of different spiritual forms. Its seems one does not have to override the other. We can, in fact, exist and worship in multiple forms. I can untie my tongue and speak in broken Portuguese, be understood by my distant relatives who are so happy to meet me in this lifetime. I can kneel at my grandmother's feet and speak in broken Lozi, and rest easy because my namesake understands me like no other. I can pray in English and know my ancestors and Creator understand me, since they exist in the River of Time Eternal and conspired all this magic we see before us.