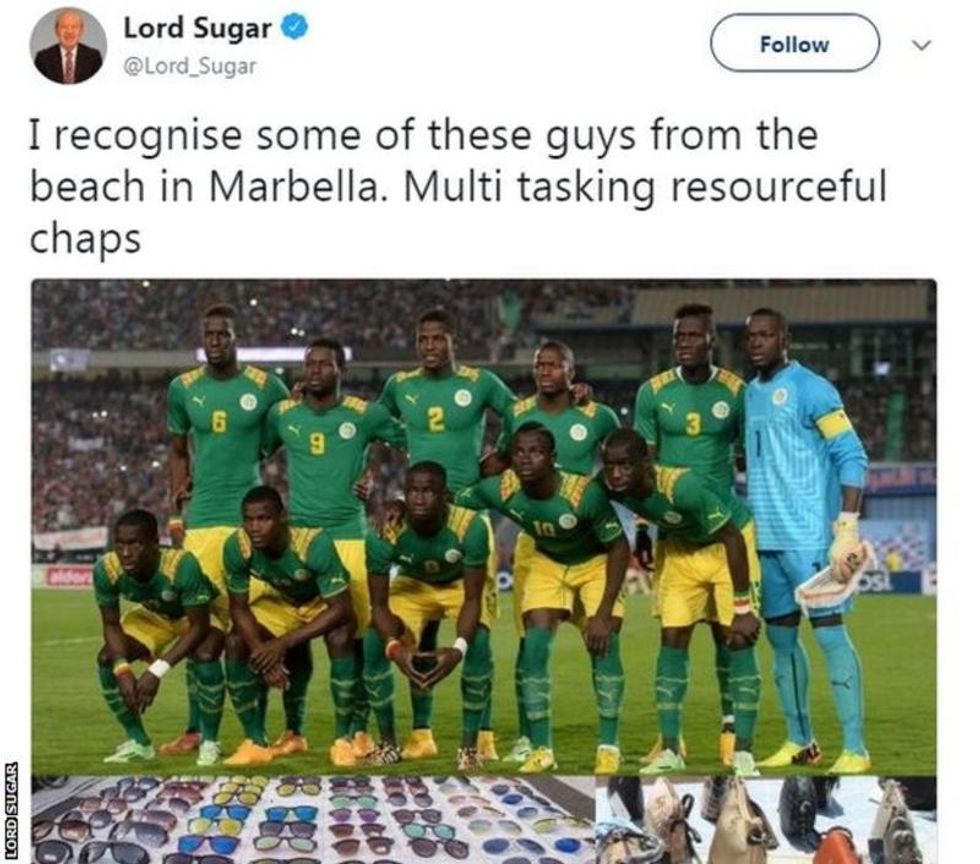 Senegal was the first African team to win their match in the 2018 world cup on Tuesday, but behind every win there's always a racist tweet waiting to appear.

On wednesday, Alan Sugar, a British billionaire who appears on the BBC's the apprentice, tweeted a picture of the Senegal team next to pictures of sunglasses and handbags. Sugar compared the team to sellers on the "beach in Marbella" and called them "multitasking resourceful chaps."

The billionaire has since removed the tweet after backlash that highlighted the racism in the tweet. Sugar posted an apology saying, "It was in no way intended to cause offence, and clearly my attempt at humour has backfired. I have deleted the tweet and am very sorry."

I misjudged me earlier tweet. It was in no way intended to cause offence, and clearly my attempt at humour has back… https://t.co/qVvA4nK6Qn
— Lord Sugar (@Lord Sugar) 1529492512.0

While he eventually apologized for his tweet, he insisted that he still found it "funny" rather than offensive. He posted, "I cant see what I have to apologise for … you are OTT … its a bloody joke."

He later posted, "Frankly I can't see that, I think it's funny. But I will pull it down if you insist."

The BBC put out a statement saying, "Lord Sugar has acknowledged this was a seriously misjudged tweet, and he's in no doubt about our view on this. It's right he's apologised unreservedly."

Sugar's tweets show how many white europeans refuse to see Africans outside of stereotypical images. Despite the white tears, we will continue to celebrate Senegal's victory.

A simple “well done Senegal” would suffice. But that intragenerational jealousy took hold of @Lord_Sugar and he ha… https://t.co/5HEYvSM6k4
— Kelechi Okafor (@Kelechi Okafor) 1529489737.0