100 Women: Jackie Aina Is the Beauty Guru Challenging the Industry To Pay Attention To Black Women 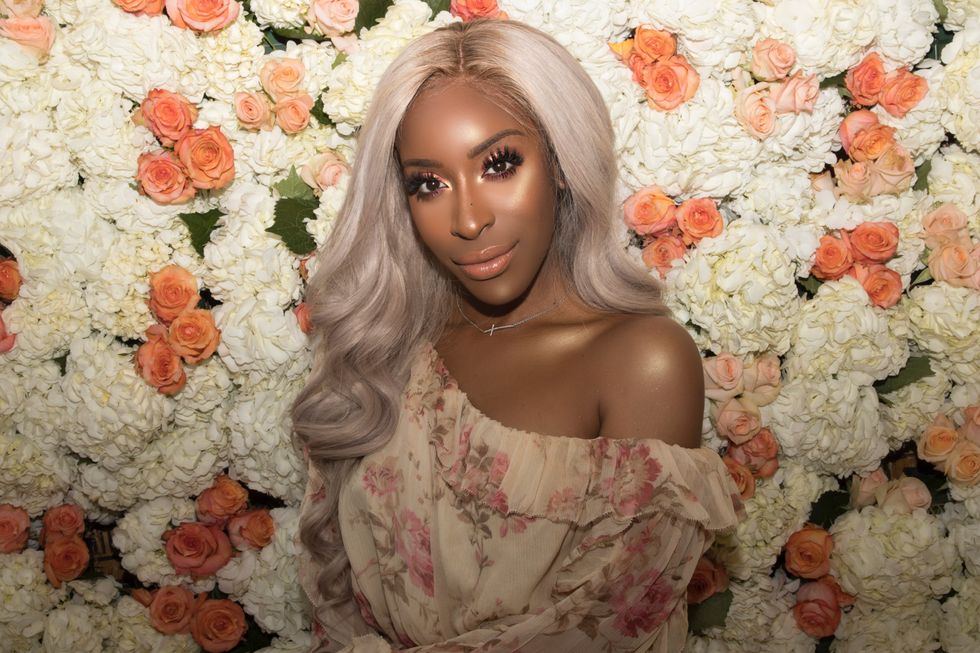 The Nigerian-American makeup artist is shaking up the beauty industry one tutorial at a time—and she's only getting started.

There are people who view the beauty industry as superficial and fuel for unrealistic standards. Then there is Jackie Aina, a woman who challenges that narrative and uses her platform to make women of all backgrounds feel beautiful in the skin they are in. With more than two million subscribers and counting, the Nigerian-American beauty guru, entrepreneur and former soldier in the U.S. Army has created an undeniable name for herself. Although she is now known as one of the biggest beauty vloggers in the game, it took time and hard work to turn her passion into a career. Despite the measured steps she took some of the people closest to her still don't understand what that means.

"There are people who still don't really get it, and that's fine, says Aina. "My mom is American. Creatively, I get all my juices from her. And my dad is Nigerian. He's very strict, very business-savvy, very academically-driven. It was more his side traditionally that didn't really understand. [They'd ask] 'Why aren't you doing the medical degree?' 'Why aren't you doing pharmacy?'"

Aina recognizes that this is a common experience for many African creatives and wants to serve as an example for those looking to pursue an alternative path. "I definitely think there are so many of us that have always had creativity in us, but we've just been hesitant to really follow up on it out of fear of not being supported, or failing. That's always going to be a fear whenever you venture off and do something new," says Aina. "But I love seeing people in my community go outside of the norm and win."

Aina believes that makeup can empower; but she also understands that this concept is lost on many. For this reason, education is yet another layer of Aina's brand. "I think a lot of people assume that makeup is just something that covers... it's not. It could be a way to look beautiful for someone who has alopecia, who doesn't have eyebrows... who is a cancer patient who hasn't seen themselves look beautiful in a long time. It could be an outlet for someone who's a domestic violence survivor who's trying to figure out how to cover bruises," she explains.

"People shouldn't be so quick to judge because it's more than just about looking pretty. It's about feeling good as well, and I do truly believe that if you look good, you feel good." It is a portion of the ongoing dialogue that she feels is important in the fight to dismantle negative generalizations around the beauty industry. And while European standards of beauty and colorism have been a hot topic in makeup culture, over the last few years another prominent part of the discussion has arisen: the importance of diverse representations and brand accountability. A topic Aina believes is partly due to the rise of social media and communities coming together.

"Someone could walk into Sephora, take a picture of X brand foundation line, and let's say they only have shades for anyone lighter than tan… that picture could go viral. That person may not even have a big following, but anyone could turn that into a topic of debate," she says. "There has never been a better time to create your own standard. We have YouTube, we have Instagram. Standards can be set on your own, whereas when I started 15 years ago, social media wasn't as widely used. I was stuck looking at whatever I saw on television or looking at whatever they shoved in my face in magazines. I didn't have the option of going on YouTube and finding someone who looked like me. Right now, whatever you think is beautiful, it's never been a better time to find that on your own."

Growing up, Aina tapped into two key sources for inspiration. One was makeup artist Kevyn Aucoin. "Back then instead of YouTube tutorials, I learned how to do makeup through [Aucoin's] books. It just wasn't blonde hair blue eyes, I saw diversity. I saw him do looks on Janet Jackson, on Naomi."

The other was model-turned-entrepreneur, Tyra Banks. "She was multifaceted, multi-talented," says Aina. "I was obsessed with America's Next Top Model. Just seeing her be the one doing all the finger-pointing and directing, was so admirable because the position that she was in is very rare. That was super inspiring."

Banks also inspired Jackie to be a voice for other young women and speak on issues that were often overlooked, i.e. her experience as a woman of color entrepreneur, the negative response she received to wearing makeup in the military, and carving out her own path. "Being yourself is number one. If you feel like there is an issue that people don't really talk about and it's untapped territory, talk about it," she encourages. "You never know if someone can relate to that. The point of being visible is using your voice, even when you feel other people can't relate."

Aina is not new to this. She has been making a career off of being herself for a long time. Going on 10 years, to be exact. And she has no problem clapping back at anyone who comes at her sideways unaware of her vet status. "It's funny because sometimes I'll get criticism now from people saying that me talking about diversity in beauty, is a marketing ploy. It's like you do realize that I've been doing this before people made money off of it, right?," she laughs. "I didn't really make a livable income until five years into my YouTube career...Like livable, where I did not have to have a job outside of YouTube. That was the reward of me talking about something that no one else was really talking about.That's really always been the underlying tone of my channel: making people that were often overlooked feel beautiful. I still talked about it, and guess what? I ended up tapping into a market that I had no idea would turn into what is now."

As a trendsetter working within what is by nature a chaotic space, Aina is clear on the importance of carving out those moments of introspection and self-care. "Social media, depending on how involved you are with it, can be very draining. I keep myself balanced by meditating. And prayer comes first. I try to make it a point to be grateful. I just don't want to burn myself out and get to a point where I don't enjoy doing this anymore because the moment I don't enjoy something, I just won't do it. it's important to find something outside of content creating to focus on sometimes."

Whether creating or meditating, Aina brings laser focus. Because of this, her journey is a testament to the fact that drive, creativity and consistency are what make for a successful career.. As advice to others who want to take their passion to the next level, Aina suggests remaining encouraged. "There's room for everybody. There's always going to be someone out there looking for someone like you. If you are super passionate about something, it doesn't hurt to even do it on the side. If you feel one lane is oversaturated, create your own."