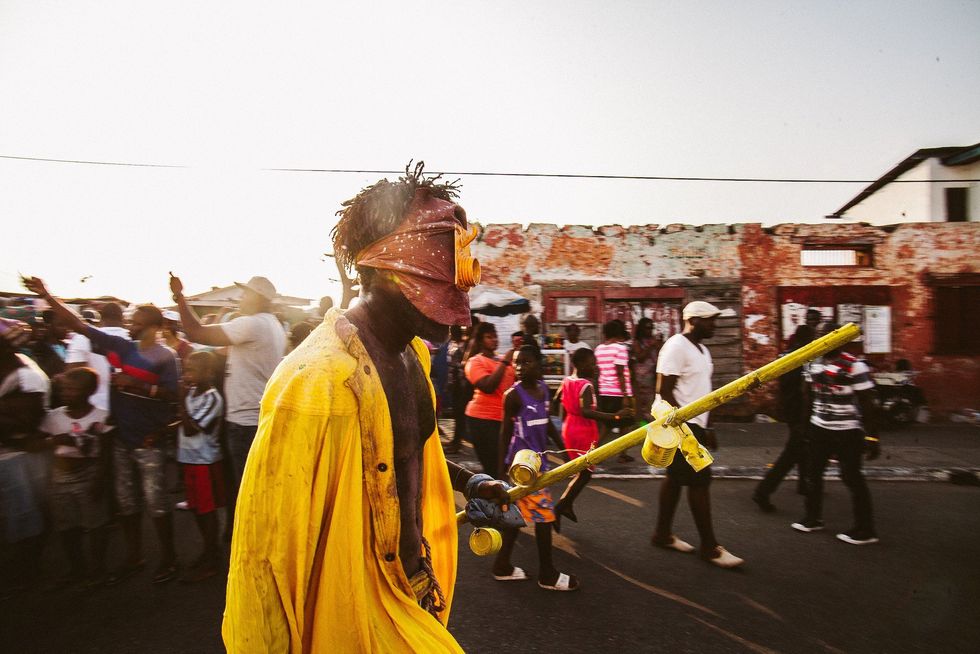 These Pan-African outfits are actively visualizing and creating realities for black people that are better than the ones we inhabit now—get to know them.

In her praise for Octavia's Brood (an anthology of science fiction stories from social justice movements), filmmaker dream hampton quotes these words of adrienne maree brown, a co-editor of the anthology: "All social justice work is science fiction. We are imagining a world free of injustice, a world that doesn't yet exist." A respectable appropriation of brown's statement would be: all pro-Black/African activism is afrofuturism in praxis.

In that frame of social justice activism being twined with the useful framework that afrofuturism is—envisioning and exploring viable realities for black people all over the world—here are five Pan-African outfits out of Ghana who're doing advocacy work, and variously tasking our imaginations to visualize an existence for black people other—and better—than the one we inhabit presently.

The "Alt" in Accra [Dot] Alt stands for alternative, which should say much about this organization's orientation: an invested interest in facilitating the alternative. To that end, A[D]A creates programs which provide spacial and other forms of support for the expression of alternative thought, and also for spawning boundary-breaking art. A[D]A's most popular initiative, the annual Chale Wote Street Art Festival, since its inception in 2011, has been thematically preoccupied with imagining and creating existences that are more humane and fulfilling—particularly for black people.

The African Electronics Trilogy exemplifies this. Between 2015 and 2017, the Chale Wote Festival's themes, African Electronics, Spirit Robot andWata Mata—have altogether exhorted festival participants to "tap into a super power grid [and] create a new encounter with reality that is entirely of our choosing and construction." The theme for this year's festival, Para-Other, does not stray from this visionary mission. A[D]A partly describes Para-Other as an order "embracing of a black labyrinth and establishment of an aesthetic that captures our cessation of flight and transit into a non-contested existence."

Last time the statistics were checked, in 2016, over 30,000 people were at Chale Wote; which is a more than 6,000 percent increase from the number that attended the first edition of the festival. Talk about possibilities.

Photo courtesy of the AWDF.

Since setting up, the African Women's Development Fund has funded and supported close to 1,500 women's rights organizations and women-led initiatives in countries all over the continent.

In April 2017, the institution launched their ground-breaking AWDF Futures Project. The initiative is basically composed of projections on the future of the continent as seen through an African feminist lens. These projections are based on a mix of data/trends analysis and sheer imagination.

The AWDF Scenario Stories is one aspect of the project. It comprises of four short stories imagining four different kinds of futures—desirable, undesirable, wild card, transitional—for African women, in Africa. The protagonist in each of these scenarios (set in August 2030) is Mariam; a queer, intelligent and free-spirited young woman in a wheelchair.

The full narratives of Mariam navigating each of these four futures can be accessed, in both text and animated audio-visual formats, on AWDF's website, together with the Futures Africa: Trends for Women by 2030 report.

What will Africa be like in 2030? What would we see if we looked through the eyes of a woman? The AWDF Futures page holds a number of possible answers to these questions.

Sci-fi writer and self-proclaimed afrofuturist, Jonathan Dotse, created AfroCyberPunk in 2010. Then, it was a blog whose focus was on "exploring the creative potential of African science fiction and speculative narratives."

Almost a decade after running as a blog, AfroCyberPunk morphed into AfroCyberPunk Interactive—a digital hypermedia content developer and publishing house—in 2017. Still, the preoccupation with "exploring the future of Africa" (as went the blog's tagline) remains prime. A part of what could be referred to as their mission statement reads thus: "Our roots in afrofuturism continue to inspire the recurrent themes, motifs and aesthetics of our publications. We aspire to [...] address the global imbalance in the representation of marginalised peoples and perspectives."

Founder Jonathan Dotse is himself at work on his debut novel, a cyberpunk mystery/ psychological thriller set in Accra, Ghana circa 2060 AD.

All of the above certainly do echo these words offered by Jonathan in a blog post titled Why Africa Needs Science Fiction: "As Africa marches onward into the future it is important that we as Africans begin to critically visualize the development that will take place on our own soil, and our vision must be based on our own unique reality, cut from the cloth of our own societies and tailored to our specific needs."

This feminist and Pan-Africanist theatre organisation optimally embodies the idea of Sankofa: an examination of heritage to select and use, presently, the positive and helpful values, in the ultimate service of creating the future.

Drama Queens is founded on the ancient Egyptian philosophy of Ma'at—which adjures for justice, balance and harmony as ways of being. The world being as it is now—generally unjust, imbalanced and disharmonious, against black people specifically, and more specifically against marginalized black communities—renders Drama Queens' work futuristic.

To ground this, they are avowedly working towards "a just, balanced and harmonious world where highest respect is given to nature and all nature creates."

This year, for instance, is Drama Queens' year of "contributing to an end to homophobia towards the African LGBTQ+ community" through various activities such as theatre productions, facilitating queer film production workshops, social media discussions and talk events.

Nana Akosua Hanson, founder and director of Drama Queens has said in an interview that her organization aims, ultimately, "to end oppression by changing mindsets through the use of cultural tools, to revolutionalize thinking and bring forth the existence of an Africa without heteropatriarchy, and a continent free from the exploitation and destruction of racist nations." Sounds about Afrofuturist.

Comics, games and animation are probably the most popular media through which creators indulge in futuristic thinking. Add to this the truism that critical, intellectual engagement and documentation are of lifeblood importance to the efflorescence of a culture. Put together, it adds up to the fact that Squid Magazine (simply, Squid Mag) is doing essential afrofuturist work.

Started in 2015 by Kadi Yao Tay and Kofi Asare, Squid Mag is dedicated to the "exploration, critique, promotion and archiving of African creativity manifested within comics, games, animation..." As it happens, Squid Mag is one of the very few, if not only, platforms on the continent that wholesomely covers African output in the above mentioned media.

There's a rather poetic resonance as to why this outfit is named 'Squid.' Here's the import of the name, as explained on their website:

The name is inspired by squids, sea invertebrates that release ink as a defense mechanism. We find it poetic how such a mechanism can be a metaphor for painting a people's realities and dreams fluidly in an ocean of canvases. An ocean that is threatened to be overrun with narratives that exclude us.

So now you know, if you didn't know before, where to go in search of a sea of narratives—of realities and dreams—that include us.

There is a great deal more than can be said for the imagination—and exercising it. It begets creation, after all. Thus, what these and other entities are doing—engendering alternative socio-political imaginaries for all peoples of African descent—is such a needful venture. But after all is said and visualized, the ultimate challenge, most probably, is to act, to create. Blitz the Ambassador puts it succinctly on his afrofuturist song, "Africa Is The Future" (long since renamed "Africa Is Now"): There ain't no future unless we build it now.

moshood lives in Accra, from where he writes across genres. He has recently taken on painting. He tweets here: @thehamzay