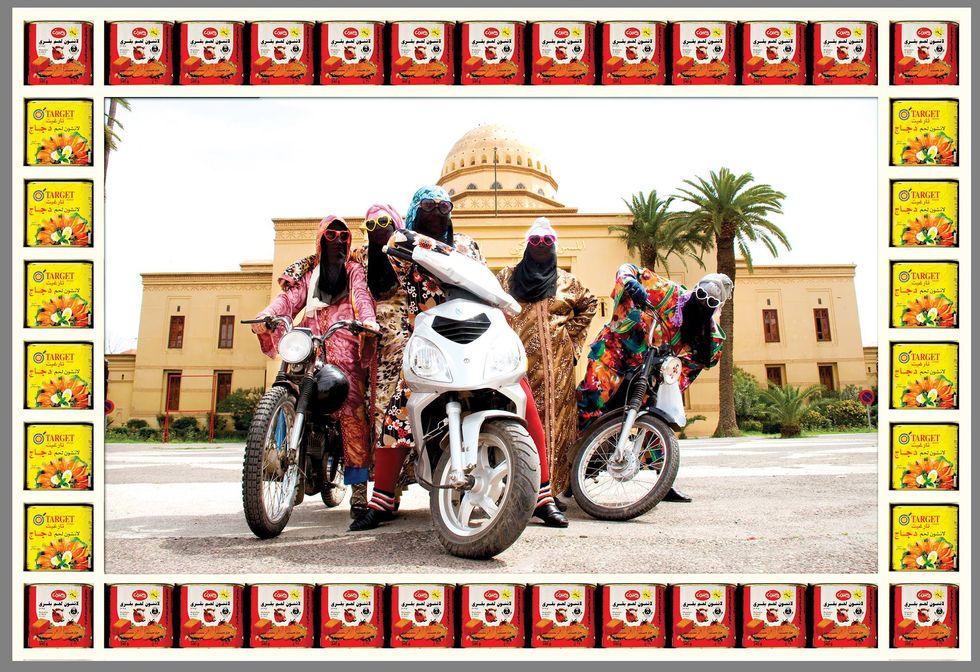 If you're in London, you need to check out these 5 must-see works of art at 1:54 Contemporary African Art Fair.

High in the steep cliffs of Bandiagara, Dogon villages overlook the sandy Malian plateaux. At the center of each earthen, thatched roof cluster lies a toguna, a palaver hut. For centuries, the Dogon, who inhabit the sparsely populated central region of the country, have gathered in the toguna to discuss the state of the community.

Since 2013, 1:54 Contemporary African Art Fair has acted as a toguna of sorts for African art. It seems fitting, therefore, that the fair's 2017 courtyard installation, Summer Surprise by Cameroonian artist Pascale Marthine Tayou, draws its inspiration from these ancient Malian structures.

1:54, now in its fifth edition, is the premier global event for contemporary dialogue and exchange on African art. Since launching in London in 2013, the fair has since expanded to New York and is poised to inaugurate its first edition on the African continent in Marrakesh next year. 1:54 London 2017 features 42 leading international galleries representing more than 130 artists from Africa and its diaspora.

For a fair that started with 17 exhibitors, its growth over the years is a testament to the growing interest in African art. In September, the Zeitz Museum of Contemporary Art Africa, the privately funded gallery branded as Africa's first contemporary art museum, launched in Cape Town. Later this month, Art X Lagos fair and the Lagos Biennial will take place.

This year's edition of 1:54 features a mix of veteran exhibitors, such as Jack Bell Gallery, 50 Golborne, and Mariane Ibrahim Gallery, as well as newcomers like SMO Contemporary Art gallery, the first Nigerian dealer to participate at the fair.

Below, we preview a selection of artworks on display at 1:54 in London this weekend.

This year, 1:54 partners with Somerset House to present an exhibition of British-Moroccan artist Hassan Hajjaj. "La Caravane," the artist's first solo exhibition in seven years, will be on display until January 7, 2018. The collection not only follows on the success of last year's Malick Sidibé exhibition at 1:54, but also draws inspiration from the late photographer's work. Hajjaj brings a modern Moroccan flair to the art of portraiture by capturing Marrakesh women ("Kesh Angels") sporting traditional clothing like hijabs and abayas while embracing Moroccan street culture on motorbikes. The playful images are framed by everyday objects such as soda cans and tin boxes. Hajjaj's photographic portraits come to life through vivid video installations that will leave you spellbound.

Congolese artist Cheri Samba's "La Vraie Carte du Monde" flips common perceptions of the world order on their head by questioning Europe's central place in world history. Samba, one of Congo's most renowned artists, remains committed as ever to pushing boundaries through explicit messages. At the bottom of the painting, Samba has inscribed a quote from Lilian Thuram's book My Black Stars (2010). Quoting Thuram, Samba writes, "Africa… is twice as large as Russia…. Yet on traditional maps, the opposite is true ... Placing Europe is a psychological trick invented by those who believe they are above, so that all others think be downstairs." The painting, along with other Samba canvases, was recently on view at the acclaimed "Beauté Congo" exhibition at the Fondation Cartier pour l'art contemporain in Paris.

Meschac Gaba's towering architectural wigs will immediately catch your attention. At 1:54's 2017 edition, you'll find a selection of these pieces, which form part of the iconic wig series Gaba began in the early 2000s. In Africa, hair braiding is a complex art imbued with symbolism. From Benin to Botswana, the style of one's crown can be a sign of age, rank, or even religion. Gaba's work, which includes braided wigs shaped in the architecture of Europe and the Americas, represents the collision of tradition and modernity as braiding styles take new meaning in the West.

Born in Ibadan, Nigeria, Abe Odedina now splits his time between south London and Salvador de Bahia. His highly stylized paintings weave together mythology and magical realism with allusions to goddesses, magicians, voodoo practitioners, and everyday people. Odedina's use of color and flat pictorial style recalls the techniques of paintings found on the streets of Lagos and Salvador on the walls of temples, beer parlours, and barbershops. In 2013, Odedina was nominated for a BP Portrait Award for his painting, "The Adoration of Frida."

Up-cycling is a common theme among this year's 1:54 exhibitions. Ghanaian artist Serge Attukwei Clottey transforms plastic water bottles while Moffat Takadiwa uses everything from aerosol cans to spray bottles. While these artists use these materials as a vehicle to address issues from consumerism to pollution, Elias Sime's transformation of computer waste is among the most visually arresting pieces at the fair. Using brightly colored electrical wires coupled with motherboards and other mechanical parts sourced from Addis Ababa's famous Mercato market, Sime's work evokes modernist abstraction with a decidedly 21st century twist.