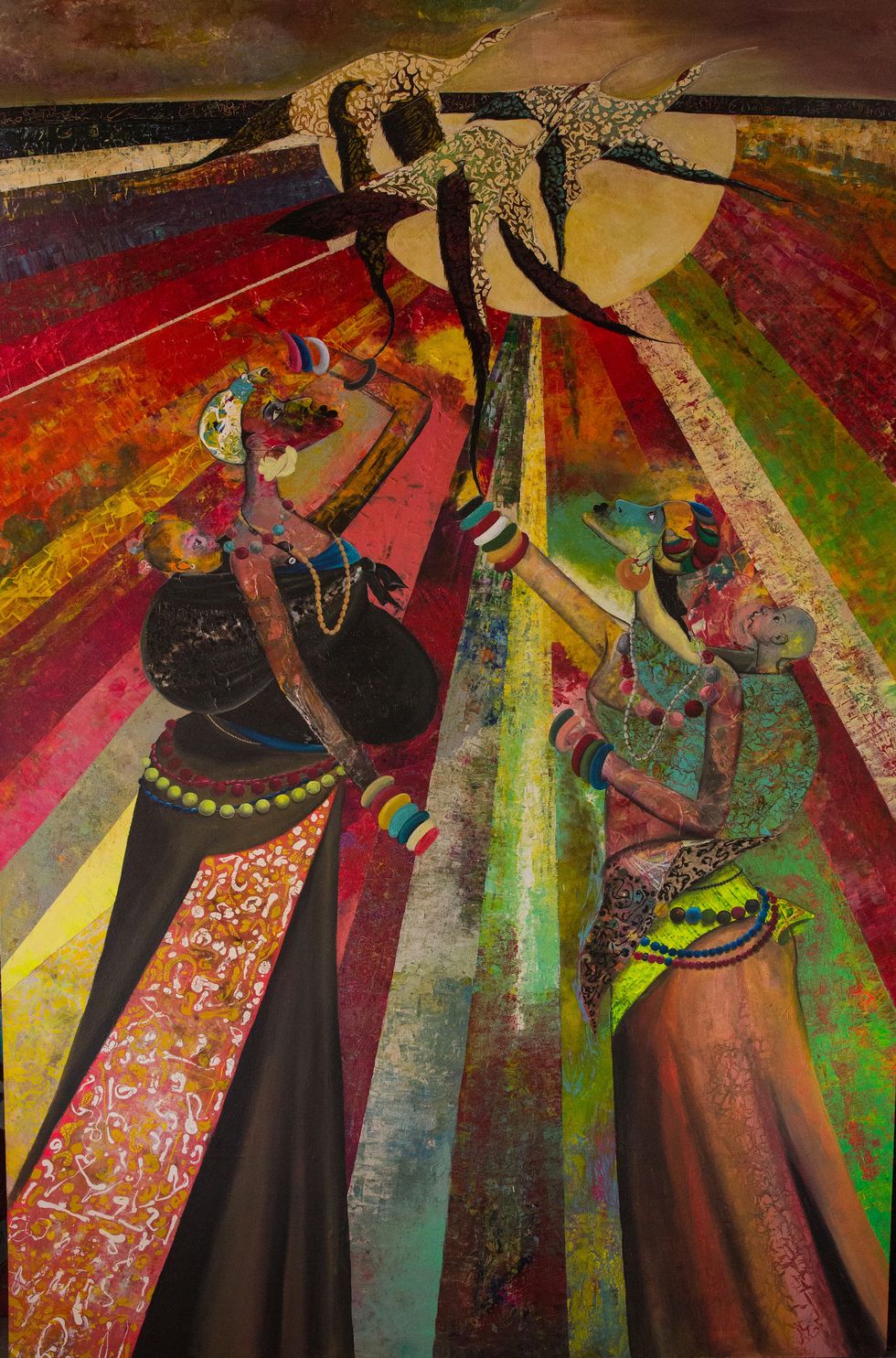 We stopped by Abdoulaye Diallo's exhibition at the 2018 Dak'Art Biennale for a walkthrough of his work.

Abdoulaye Diallo, better known as Le Berger de L'ile de Ngor or "The Shepherd of Ngor Island," is an artist who has produced work in a notable red house on the Senegalese island since December 2011. A telecommunications engineer by trade, the retired 65 year old now finds solace in painting.

Normally to visit Diallo, you take a trip to his workshop, but this May he brought himself to others. For this year's Dak'Art Biennale, Diallo displayed his exhibition, Quelle humanité pour demain? (What Humanity for Tomorrow?) at Dakar University's Cheikh Anta Diop Library and has been viewed by over 4,300 guests. The setting was purposeful. Diallo chose to place his thought-provoking works in a place discernible for its furnishing of young minds.

The exhibition was a mosaic of fresh colors filled with both the real and the abstract. Diallo took special care in helping guide visitors like myself through it. I journeyed with the artist through earth in its current state, its past and apprehensions he has for our future, alongside a group of college students.

He offered great wisdom and often when he spoke, the messages he attempted to transmit could be described as nothing less than otherworldly. He examined society's relationship with politics, technology, climate change, terrorism and ethics. He asked that we do the same. We meditated on how the West imposes itself on the rest of the world and slowly destroys it. We spoke of the evolution of technology and artificial intelligence and how the two would jeopardize life as we know it. We spoke of what climate change will do for future generations. We spoke of the appearance of repetitive numbers in both his life and Nelson Mandela's.

As myself and students from the university strolled along and discussed his oeuvres, it became very apparent he has an affinity for numbers and codes. It became apparent his sizable canvases are full of symbolism that can not always be caught at first glance. It also became apparent he exudes the confidence of a da Vinci as he stated and rejected the notion that he's been compared to Picasso despite being a novice painter.

Diallo poured his passion into this exhibition and effortlessly transformed the abstract into something concrete for his viewers. Despite a late start in the arts, he possesses an analytical mind and inspiring aesthetic that will surely take him far.