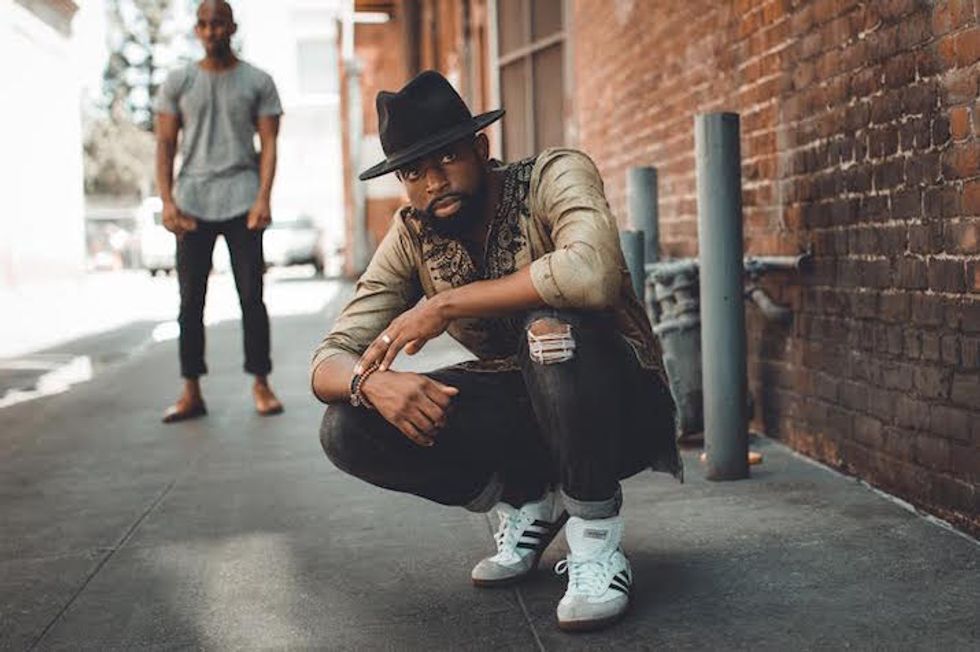 Lassana “Ace” Harris has already made a name for himself in the hip-hop world. The Grammy- nominated producer has produced hits for Nicki Minaj and T.I. amongst others and is now taking his catalog a step further with his debut album ATLiberia. As its name suggests, ATLiberia represents the musician’s dual Liberian and American heritage, mixing elements of Southern rap with pulsating afrobeat, highlife and soca beats.

The album—featuring guests like Lloyd Musa, Laza Morgan and Cypha Da King—explores themes of culture and identity, highlighting experiences unique to first generation African immigrants who’ve had to navigate various aspects of their cultural identities in their everyday lives. ATLiberia celebrates the many facets of Harris’ bicultural upbringing, “it is music that embodies the rhythms and textures of Africa and the pulse and heartbeat of diasporic culture” he mentions.

In a brief interview with the musician below, Ace Harris further discusses the concept behind ATLiberia and shares what he wants the album to symbolize for fellow first-generationers.

Damola Durosomo for Okayafrica: How did the name and concept for ATLiberia come about?

Ace Harris: I was sitting up one night last October and thinking about my career and what type of mark I would want to leave on culture. I feel like every great producer either breaks a sound or breaks an artist. I hopefully plan to do both. So the idea hit me that I should do a project that’s a reflection of my heritage and upbringing: Atlanta Raised, Liberian Made… ATLiberia. Plus, my mom, who is not really hip to music at all, fell in love with Michelle Williams’ hit song “Say Yes” feat. Beyonce and Kelly and randomly says to me “you should try putting some of the African beats in your music.” Coming from her that was like total confirmation to do this project.

Why do you think it's important to incorporate your Liberian culture into your music?

I think it’s very important because it’s who I am. Growing up first generation American to Liberian parents has influenced literally every part of my life! Plus I grew up playing drums in a West African church so I was introduced to that African sound at an early age. There’s no denying that that exposure and upbringing has always shaped the way I make music. I feel like African music and specifically African rhythms and syncopation have influenced a lot of the popular music we hear today. Now, whether African music gets credited for that is another thing.

You've worked with some pretty big names in the hip-hop world, but from our understanding, this is your first time producing music with heavy afrobeat elements. How was this experience different from production you've done in the past?

Though I’ve made some afrobeat type songs in the past this is my first time really honing into the sound and really creating a project with those elements, so I’m super excited. This experience was different, for one, because I’m shaping and curating the whole sound and themes of the album whereas the work I’ve done with like T.I. and Nicki Minaj I was more so contributing to their overall vision. Also, this experience was unique because It was cool to bring in the various artists and mash-up their style with that afrobeat sound. Like the song IFE which I did with D. Woods was a cool fusion.

As a Liberian-American musician, how important was it for you to explore themes of culture and identity on the album?

I had to make sure ATLiberia had that African aesthetic in terms of the music but also representing that African pride in terms of the lyrics! Like on “African Star,” which I wrote with Lloyd Musa, it’s a total celebration of life and heritage. History lesson aside, we all know that for some our heritage was stripped from us. So I think it’s super cool and necessary for us young Africans in the diaspora to rep our culture. I feel like when we do that and be genuine to who we are, people from all walks of life and all cultures will appreciate our story and buy into our music.

What do you want ATLiberia to represent for listeners? Particularly for those who have grown up as second generation Africans in America like yourself?

I want ATLiberia to be the Soundtrack for Africans in the diaspora. For me and for many other first generation Americans it represents the sound of Africa in America. It’s hip-hop, it’’s dance, but with an African aesthetic. I feel like the African sound is really starting to impact globally and there are so many artists who are out there killing it. My hope is that ATLiberia adds to this movement and puts on for my country Liberia.

ATLiberia is available now, a portion of the album's proceeds will go to the ICF Mission of Hope school in Liberia.