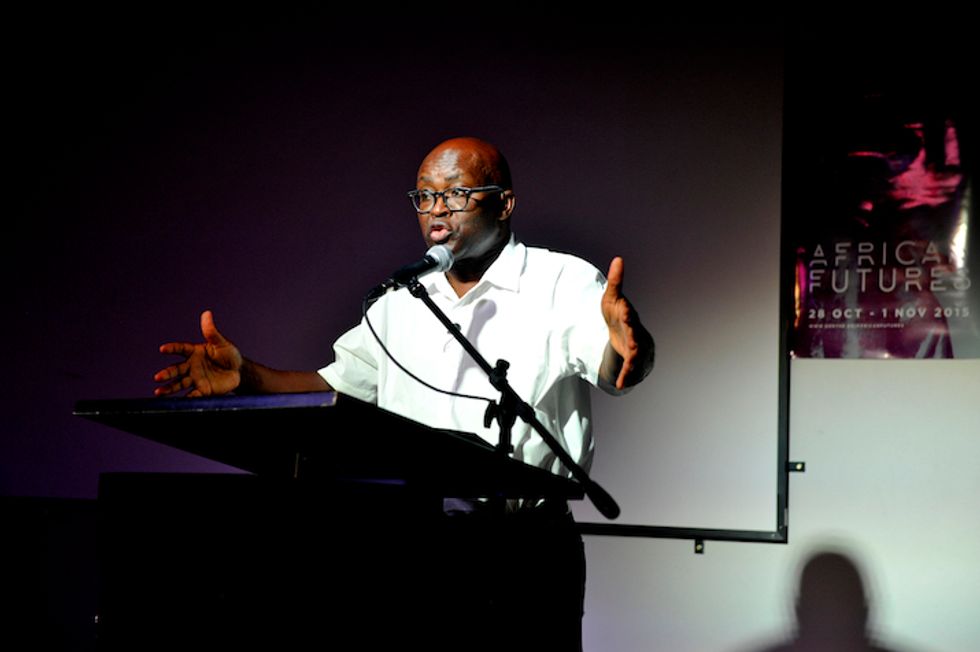 Achille Mbembe says that the future of our planet is being shaped by movements taking place on the African continent right now. We should listen. The Cameroonian intellectual is the leading voice in discussions around “African Futures.” His work as a professor at Johannesburg’s Wits University, his publications and even his Facebook statuses have helped spark meaningful conversations regarding the future of the continent and, ultimately, the world.

Okayafrica had the opportunity to speak with Mbembe ahead of his appearance at the Goethe-Institut’s African Futures festival last month in Johannesburg. During our conversation, the political philosopher spoke of the monumental social and economic transformations occurring in Africa and highlighted the central role that young people play in fostering these shifts. Mbembe makes it clear that Africa is indeed the future, and its prodigious and charismatic youth are its trailblazers.

Damola Durosomo for Okayafrica: What excites you about the future of the continent?

Achille Mbembe: Okay, first of all, one thing that excites me about the state of the continent today is the extent to which it has leapfrogged a series of steps other societies have had to follow in terms of their technological development. Most regions of the continent today—with the rapid expansion of mobile telephony—are moving free from the age of iron to the digital age.

This goes hand in hand with an explosion of forms of knowledge, some of which borrow from traditional knowledges, and others, from high-end technologies found in the rest of the world. That acceleration seems to me to be the main philosophical and political question, as well as economic question, that we have to put at the center of any discussion on knowledge production today.

How do you think this acceleration will affect development? What does it mean to skip these steps?

Such a rapid acceleration, if not carefully managed, will result in a number of dislocations in various areas. The striking thing with Africa, from a historical perspective, is the extent to which it has always embraced novelty and the extent to which African societies have been able to embed the novelty within some rather old cultural patterns.

I have no doubt that the digital revolution is being understood or domesticated from within the same pattern, and I can only see benefits. Especially with young people on the continent, opening themselves up to these new human-made inventions.

Speaking of young people, they seem to be the focus right now of a lot of the conversation regarding Africa’s future. What role do students play in all of this?

Students in particular, are at the avant-garde of this new development. It’s important for us to remind ourselves of the fact that the continent’s demographics are expanding. We’re in the midst of a demographic revolution. The continent is composed of a majority of young people and we’re simultaneously in the midst of an urban revolution. We are witnessing from Lagos to Kinshasa, to Nairobi, Rwanda, Johannesburg to Douala and Abidjan the emergence of forms of urban civilization which we haven’t seen in the recent history of humankind.

This combination of a demographic revolution and an urban revolution is opening up Africa to a whole set of new dilemmas we have to confront. One such dilemma is the dilemma of stipulation. We need to turn the continent into a vast space of stipulation which implies the abolition of our internal boundaries, and so, young people are at the forefront of those efforts at reopening the continent to itself and technologies play a critical role in that reopening of Africa to itself.

Let me say that the South African situation is somewhat typical of conditions of a society trying to emerge from long histories of racial domination. The main future of South Africa is being ruled by a black majority politically while still being dominated, both culturally and even more importantly, economically, by a sizable and powerful white minority.

This bifurcation between the political on the one hand, and on the other hand the economic and the cultural, manifests itself very dramatically in the institution of the university. In the sense that most universities in South Africa are still emulating the colonial morals of Oxford, Cambridge and the rest at a time when there’s a huge demand coming from the South African society, especially the black part of the society, to align the objectives of higher education with the requirements of alleviating mass poverty and upliftment. That has created a whole set of contradictions and has opened up a space for new forms of struggles which here take the name of the decolonizing movement.

The decolonizing movement is aiming at transforming the curriculum, to bring to an end what it perceives as institutional racism in the universities, recruiting more Black staff, linking up more forcefully student struggles and social struggles. It is a movement that is in its infancy; it is now trying to link up those intellectual questions with questions of democratization of access, free education for the poor and so forth and so on, which explains the recent or ongoing uprising in South African universities.

Why is it important to discuss African futures?

For a very long time, the question of the future was not on the agenda when we were dealing with the questions of Africa. It was understood that Africa didn’t have a future. You might remember that in the mid-90s, the main magazine, The Economist, ran a headline with the title: “The Hopeless Continent.”

Now, as we enter the twenty-first century, it appears to many, including those in the international financial sector, that Africa is in fact the last frontier of capitalism. It’s becoming more and more evident that the very future of our planet is being played out in Africa, whether one is dealing with questions of ecological crises, climate change, refugees, renewal of energies and so forth and so on, Africa is back on the agenda. The belief is that the twenty-first century will be an African century.

That’s the horizon, and now we have to make it happen. The arts are playing a powerful role in translating this horizon into fact, and the festival in Johannesburg is part of that consciousness-raising exercise.

In one of your recent Facebook status updates you explored the idea of the student movement in South Africa being a pre-revolutionary moment in South Africa’s history, and you concluded by saying that with South Africa, the rule of thumb should be openness to the unexpected. Should that be a rule used to approach the rest of the continent, or is that something that is specific to South Africa?

I think this applies to the entire continent, not simply South Africa. We are clearly at a moment when, at least those of us who live here, and who work here, who travel throughout the continent, can begin to see major political, economic and cultural shifts.

For instance, over the last 15 years, the continent has been experimenting with rates of economic growth among the highest in the world. Of course, this huge amount of wealth that’s being produced is not equally redistributed. It is not yet leading to high levels of employment, but something is going on and that requires our attention. We cannot say that nothing is happening.