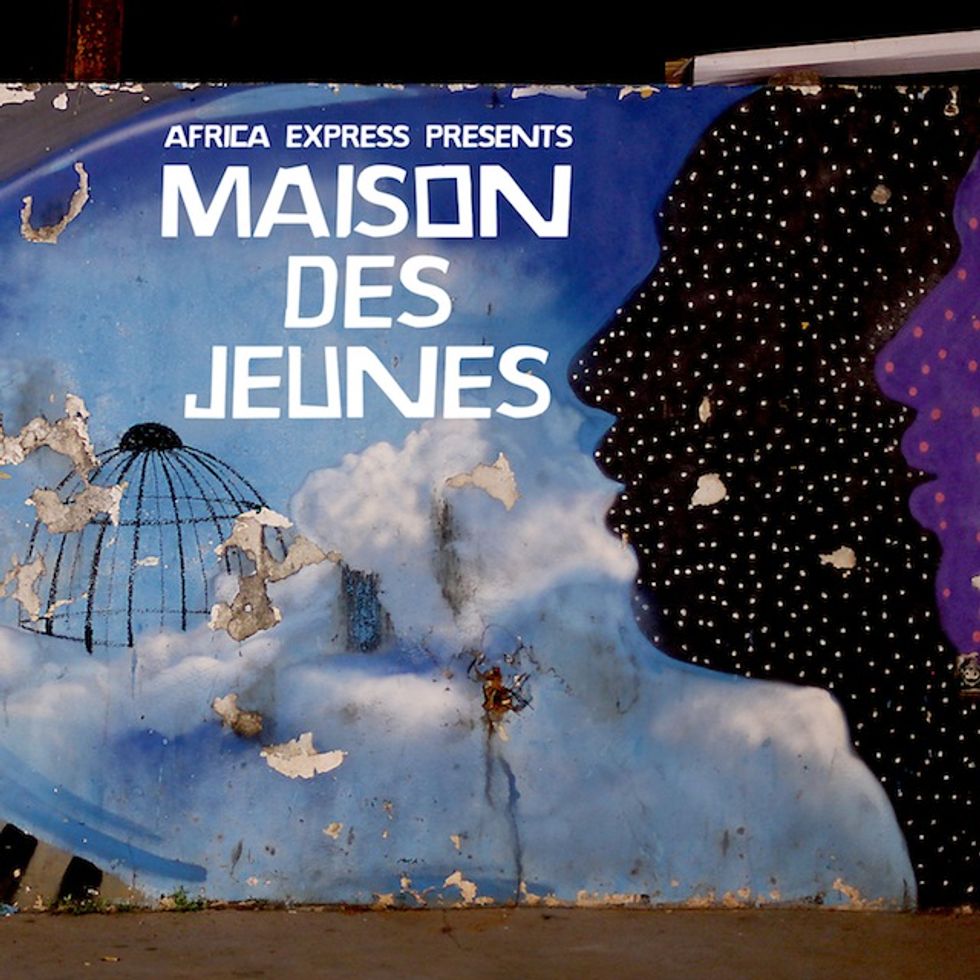 Maison Des Jeunes, the latest project from Africa Express, exceeds all the requirements of a cross-cultural musical conversation to remember and cherish. Africa Express began in 2006, when Damon Albarn (Gorillaz, Blur) traveled to Mali with a cohort of other Western musicians and collaborated with Malian giants the likes of Toumani Diabaté, Salif Keita, and first couple of the dancefloor Amadou & Mariam. Since this initial foray, Africa Express has formed a collective that informally brings together over one hundred artists from around the world manifesting itself in a number of sold out concerts and a week-long train tour of the UK in 2012. This album, however, sets itself apart from anything else the collective has achieved. It's a cohesive and honest masterpiece that, despite the social and political context in which it was made, is really all about the music.

Maison Des Jeunes was recorded in a week, on the third floor of a city youth club of the same name in Bamako. As expected, the album carries some heavyweight Western names, including Albarn, Brian Eno, Nick Zinner (Yeah Yeah Yeahs), David Maclean (Django Django) and Ghostpoet. But what sets this album apart from the ever-expanding — and ever-more-gimmicky — canon of brightly packaged “world music” compilations is the roster of local artists that Damon Albarn chose as collaborators. This is not the star-studded line-up of Malian music royalty that one would expect, but rather a snapshot of the country’s up-and-coming, innovative young musicians. The result is that you can hear these musicians– both Western and Malian— pouring every ounce of energy into their songs and playing with sonic ideas that often fall out of the accepted norms of Mali’s ancient musical tradition.

Adama Koita’s opening track, “Fantainfalla Toyi Bolo,” produced by UK-based electronic upstart Two Inch Punch, teases what is to come. Starting with a sparse and hypnotically stubborn string and calabash groove, the music gradually finds itself cushioned by what sounds like a kora recorded underwater and then transmitted through outer space. It is the perfect reminder that what you are listening to is the sound of cross-generational and cross-cultural artists experimenting with traditional instrumentation and unchartered sonic landscapes.

And just when you are getting comfortable, you are hit with a blast of distortion as the second track, “Soubour,” kicks into high (very high) gear courtesy of Timbuktu outfit Songhoy Blues. The band, formed in reaction to the Islamist occupation of northern Mali, which banned music, directs a poignant middle finger to those that sought to suppress thousands of years of musical tradition. Wailing electric guitars dance over a percussion-heavy boom bap and the raw, razor-edged guitar style of Nick Zinner of the Yeah Yeah Yeahs blends in well with Songhoy Blues’s relentless rhythms to the extent that it is difficult to distinguish which guitar is his. The song was probably an easy choice to be released as a single as it stands out from the rest of the album as screaming proof that all you need to communicate are a few turned-up guitars. A politically poignant collaboration between UK-based trip-hopper Ghostpoet and the talking drum ensemble Doucara, round out the opening trifecta. Again expectations are thrown by the wayside as Ghostpoet’s rhymes, anchored in the trance-inducing refrain, “why won’t the seasons change?” give way to a frenzy of drums.

This is not a top-heavy album, however. This collection of songs is packed with gems and none fall into the trap of skin-deep novelty in which cross-cultural collaboration often finds itself. Other stand-outs include Tal B’s aggressive rap flows playing call-and-response with the sound of a kora; Yacouba Sissoko’s virtuosic string playing that —thanks to Brian Eno’s production— belies the small room where it was recorded; and the Lobi Traoré Band boasting a rhythm section anchored down with the discipline of afrobeat, only to be subverted by washed-out guitars and a vocal line so percussive that at times it sounds like its trading solos with the djembe player. But the album reaches its fever pitch on Gambari's “Yamore,” with vocals from Kankou Kouyaté, the 21-year-old singer and niece to the ngoni maestro Bassekou Kouyate. In her all consuming voice, you can hear another Malian songstress legend in the making.

As the album ends, with Moussa Traoré’s “Farafina”—a French-language poem backdropped by a waterfall of strings — and Tiemoko Sogodogo’s “Latégué”— a stripped-down lullaby that sounds like dawn– it feels like the end of a journey. It is tempting to think of this album as a political statement of solidarity, considering the unrest that still continues in parts of Mali following the civil war last year, but it would be short-sighted to do so. The timing of this album assures us that nothing will quell Mali’s eternal creativity, but the album is better enjoyed for what it really is— a successful experiment in cross-cultural conversation and forty-seven minutes of really good music.

Update 3/22: Transgressive Records has announced the release of the physical and deluxe editions of Maison Des Jeunes. The physical edition (which features 5 new tracks) will be available as a limited edition Record Store Day Exclusive (1000 copies) 2x12” blue vinyl LP on 4/19, followed by a CD and digital release on 4/21.

Update 4/16: You can now listen to Olugbenga and Gambari's rendition of "Wade In The Water" with backing vocals from Damon Albarn and Brian Eno before it's available as a bonus track on the Record Store Day deluxe edition.