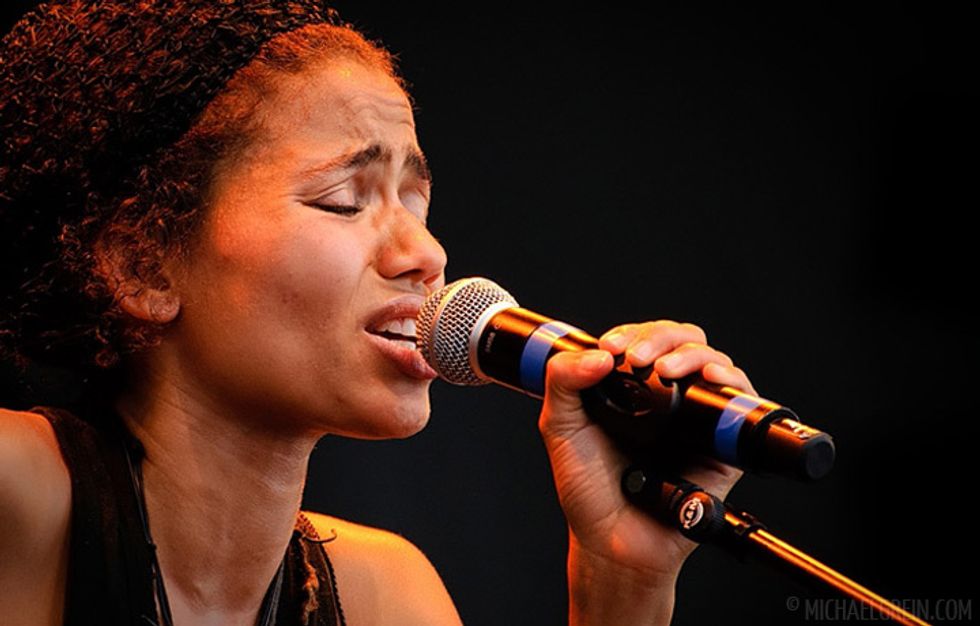 Africa Now! was an inaugural two-day event that wrapped up with a main stage concert on Saturday night at the historic Apollo Theater in Harlem New York. Organizers, including the World Music Institute and the Apollo Theater, chose a quartet of acts that showcased a range of styles to represent contemporary Africa.

South Africa’s Freshlyground (whose latest video for "Take Me To The Dance" we premiered ) kicked off the show to an enthusiastic crowd. They offer a sophisticated take on pop anchored by charismatic lead singer Zolani Mahola, whose flexible voice stretches from an edgy alto to a growl to sweet high notes. “Apollo, I brought you a baby!” she said, showing off her baby bump - but you wouldn’t know it from her tireless energy or dance moves.

They hit all the right notes for the crowd, who were up on their feet dancing by about the second song in. With a sound that ranges from pure pop to smooth jazz, colored from time to time by the bright melodies and harmonic guitar work of South Africa, they add a rich instrumentation that includes violin, flute and sax.

From contemporary pop to classic Congolese melodies; Lokua Kanza, a longtime favorite in his native Congo (Democratic Republic of Congo) was next up. The singer/songwriter plays guitar and the band includes a younger brother on small percussion (including talking drum) and occasionally bass plus two back-up singers - one of them his daughter. Their lush four-part harmonies fill out the sparse instrumentation, topped by his very expressive multi-octave voice, and they had the crowd mesmerized. It was his first visit to the U.S. in a decade. “You don’t see it but you can’t imagine how much I’m shaking,” he said. He has a personable stage presence that added an intimate note to the evening.

German-based Nigerian singer/songwriter/ guitarist Nneka fronts a tight rock band that leans heavily on what you’d call a polyrhythm section. She intrigued the house with a unique sound that blends shades of 1970’s arena rock, reggae and golden era West African guitar grooves with her sweet, breathy voice. Her songs are melodic and feature thoughtful lyrics and she performed a cool version of African dance to her version of Afro-rock.

Ghana-born Brooklynite Samuel Bazawule, aka Blitz the Ambassador, whose moniker is all about his mission to be a bridge between Africa and the U.S., was a fitting end to the show. An African kid who grew up listening to hip-hop, he’s been called ‘the future of African music’ (by Rolling Stone Germany). His seven-piece band includes a horn section and offers up a kinetic show with a unique blend of hip-hop, funk, Afrobeat, highlife, soukous and rock guitar licks.

He’s a storyteller, sometimes in rap and sometimes straight up and his act itself pays tribute to hip-hop and African influences, including classics like Fela and Miriam Makeba along with Ghanaian rappers Osirisa.

It was the first Africa Now! event but organizers promise to continue and said that planning for next year is already underway.