The African King Of Pinterest: Re-Visualizing The Continent Through Color 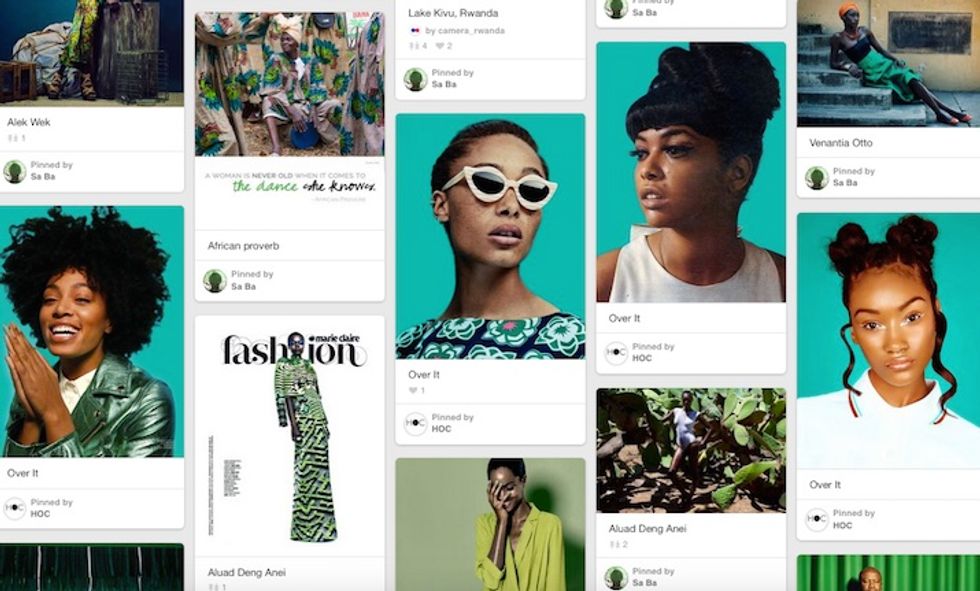 "The African King of Pinterest," William Chitangala, shares his ideas on color as a concept for reimagining and redefining the Continent.

When Okayafrica came across the stunning Pinterest boards of German-Zambian luxury brander William Chitangala we quickly dubbed him “The African King of Pinterest.” When he’s not applying his marketing know-how to the Frankfurt-based company Saint-Germain, he's creating collaborative pinning boards inspired by Afrocentric design, fashion and culture. In the op-ed below, Chitangala shares his ideas on color as a muse for reimagining and redefining the Continent.

I started “pinning” circa three years ago. My main motivation was I wanted to be inspired. I wanted to understand this divine love affair we have with design and art, and I wanted to cultivate ideas around the conceptual business, or an enterprise that corresponds with the environment.

The first thing I discovered was that Pinterest helped me to categorise my digital explorations and develop a habit of putting them in a convenient order. Out of that, came my personal brand, HOC, short for House of Conceptions. I had focused on design, fashion and cultural topics, but momentum arose out of my efforts to visualise – and engage a community – on Africa-related aesthetic stories.

For collaboration, I invited others to contribute and share their explorations. Together we digitally curate Pinterest boards to reflect the beauty and diversity of contemporary and traditional African art, design and societies. How people engage with these boards is amazing. They really consider the boards as their own (which they are, in fact).

We launched the first group board in autumn 2013, with just a handful of pinners. Over the past months we arranged pinning sessions, in which we rendezvoused through different time zones, just a couple of tweets away, ending with our hashtag #ColoursOfAfrica. Now, we are more than 20 pinners from six continents, with close to 550 followers and thousands of pins interpreting the rich hues of red, orange, yellow, green, blue and violet.

Organizing contributions by colour -- rather than by geography or culture -- gave us the opportunity to realign Africa with its diaspora of influences and influencers. To illustrate this, and judging from the number of contributions we’ve seen on our boards, Africa is the “indigo-blue” continent where you can align Miles Davis’ album Kind of Blue next to the mathematically-precise, deep blue architectural ornaments of Marrakesh; or, post a series of menswear designer Ozwald Boateng’s bold cobalt suits, add a style story on Street Etiquette's Travis Gumbs and Joshua Kissi, and finally highlight Lupita Nyong’o in Nairobi blue couture.

Colour is a sublime concept. It easily annihilates political and social concepts, such as race, nationality, ideology, and epochs. It’s allowed me to access other perspectives, and view African-related visual stories from different points and angles.

For example, recently I started to look at urban planning and architecture as inspired by British-Ghanaian architect David Adjaye. In his seven-volume book Adjaye, Africa, Architecture, he photographed thousands of buildings, sites and places over ten years in the 53 major African metropolitan cities he visited. What’s most notable however was Adjaye did neither tell the conceptual narrative of architecture by nation, nor did he tell the story of an architecture by epoch. Rather, Adjaye presented these metropolitan cities according to the terrain in which they are situated: the Maghreb desert, the Sahel, the Savannah & Grassland, the Mountain & Highveld and the Forest. A great approach, I find.

Similarly, what started out as a leitmotif to categorise our creative works has profoundly helped me realign my understanding of African visual cultures and about “the brand Africa” – where breaking down narratives placed upon us means redefining the timeless and colorful richness of the Continent.

William Chitangala is the co-founder of creative agency Saint-Germain in Frankfurt, Germany. He also sits on the Youth Advisory Board of Brand Africa. His favorite color is black.