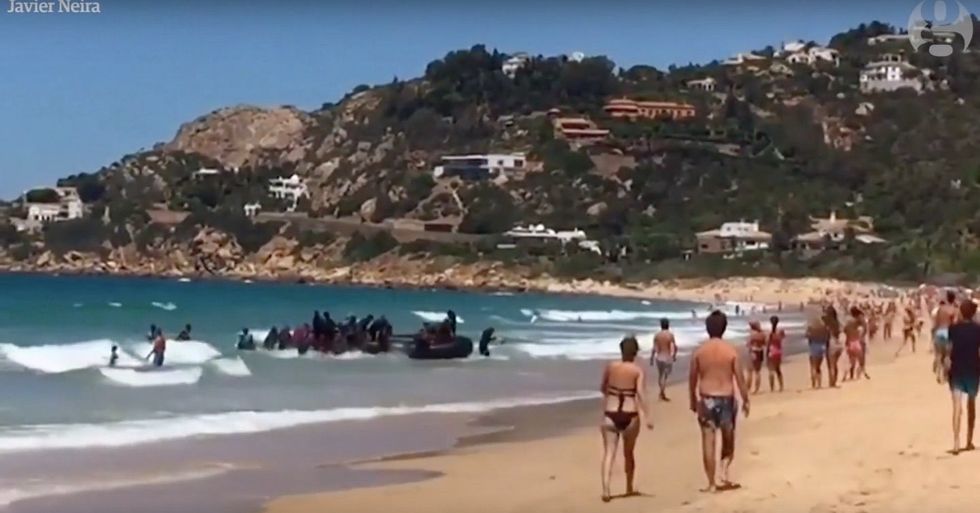 A new clip from The Guardian, shows beachgoers in Southern Spain watching as a boat carrying African migrants reaches shore.

A new clip from The Guardian, shows beachgoers in Southern Spain watching as a boat carrying African migrants reaches shore.

Up to 20 passengers can be seen running onto land in a dinghy and continuing into the surrounding countryside. The group, likely reached the area called Zahara de los Atunes—located just 7.7 miles from the coast of North Africa—via the Strait of Gibraltar. This route, considered "less hazardous" than the path from Mauritania to the Canary Islands, has become more widely used in recent months, as reported by the Guardian.

According to a spokesperson for the EU's Frontex border agency, this is the shortest route and it  allows for the passage of larger groups. The spokesperson also stated that migrant camp closures in both Algeria and Morocco may be responsible for migrants taking greater risks to reach Europe in recent months.

According to data from Frontex, the number of migrants who made the crossing into Spain in the early months of the year more than doubled that of last year, with 7,500 people entering the country in the first three months of 2017, compared to 3,200 crossing during the same period in 2016.

The migrant crisis is far from over, and this video is a glaring reminder. Watch it below.