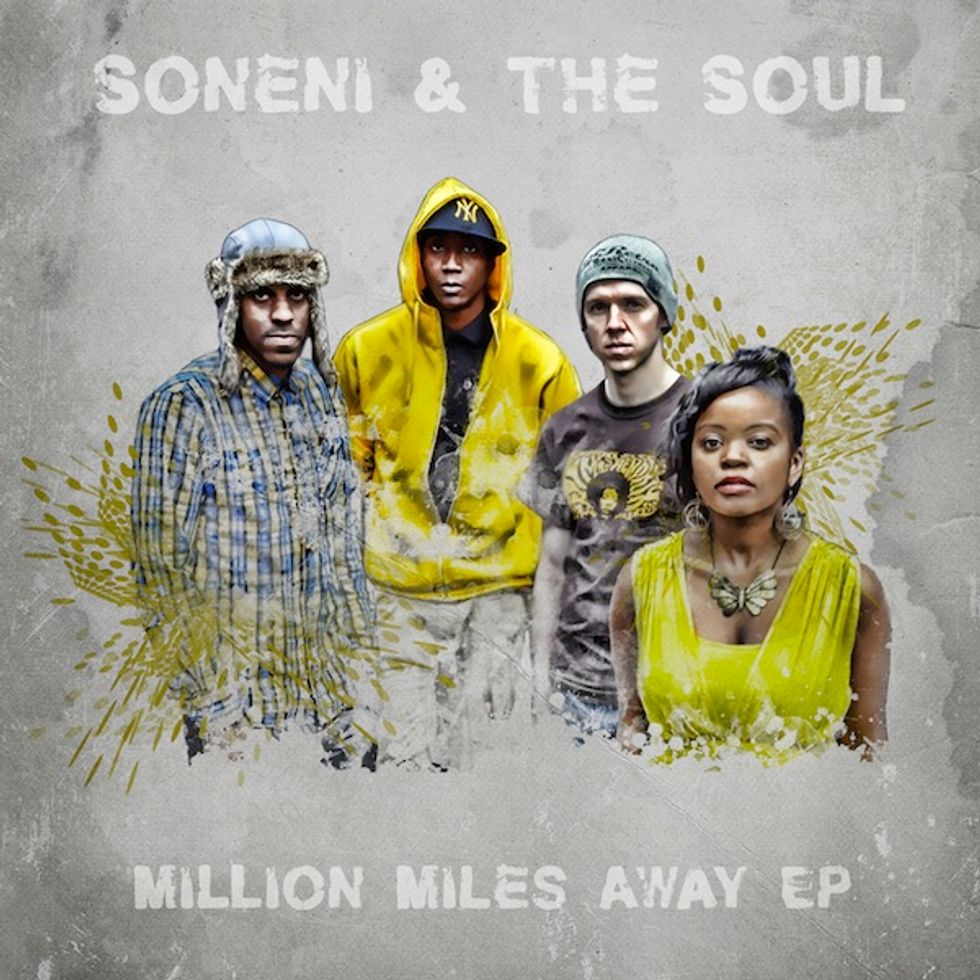 Soneni & The Soul is an Afro Soul Band from London that recently released their debut EP, “Million Miles Away.” We caught up with Soneni, lead vocalist of the band, to learn more about the inspiration behind their music, their African roots and vision for the band.

How did Soneni & the Soul band form and what is your vision?

I met Elmo (producer/bassist in Soneni & The Soul) back in 2008. I was performing as a solo artist, and he was producing under the name Funk For The Soul. Initially, he gave me a few tracks that he thought would work well with my vocals. One of them I fell in love with instantly. It became our debut single "StarStruck," and was spun on BBC 1Xtra. We then worked to get a live band together to really take our music on the road. Boukie (our badboy drummer) has been with us for a few years now, and A-Train (super cool guitarist) is our newest member. All of us bring a range of influences to the musical table, which are incredibly complimentary and help to create our unique and refreshing sound.

Our vision is to create and share music with a message, while putting on fun and passionate performances that leave such an impact, that they want to come back for more!

Your songs "Love my London" and "A Place Called eKhaya" express the notions of identity and the quest for home that many of us can relate. How did you learn to embrace London as your home while also identifying with your Zimbabwean roots?

If I'm absolutely honest, I began to appreciate London more when I travelled outside the city. I'm still yet to visit a city as culturally diverse as London. The first half of my life epitomized cultural diversity in such a way that it was just normal to me. I grew up in a part of North London called Stoke Newington, and there was such a mix of people from Africa, the Caribbean, as well as Turkey, Asia and so forth.

In my verse on "Love My London," I say I'm "still grateful my parents chose this land, where opportunity is hard to miss like Mayweather's fist." In America, musicians often gravitate towards New York for their big break. In Southern Africa, it's been Jo'burg that had the jobs and opportunities for decades. In the United Kingdom, it's London. I became more aware of this in my early 20's, when I see artists traveling from all parts of the UK just to get a slice of what London has to offer. Yet I was blessed to be born with it on my doorstep, to the point that it took going to other places where opportunities - let alone other ethnicities - are so sparse, that I then became more appreciative of where I was.

Still as I point out in "A Place Called eKhaya," being African, let alone Zimbabwean, wasn't always easy growing up. I grew up in an era where being African was something you got dissed for. So that piece addresses that, alongside a conflict that I've faced later on in life of being born in London, but not really counted as being from here due to being a second-generation immigrant. At the same time, when I visited South Africa a few years back - I loved it and yet was simultaneously saddened at feeling like an outsider; a visitor. I'd definitely say it's taken me many years of soul searching to find the myself within all of this. It's also been really interesting to talk to others who can relate to having the same cultural catch-22.

During 2012's London Olympic & Paralympic Games, I'd never felt so proud to be a Londoner and at the same time I'm finding myself embracing my Zimbabwean heritage more (through songs like "Siyahamba") and it's a beautiful thing to be embraced by members of the Zim music scene and diaspora as well. It's all falling into place at the right time, and I feel that our music is a real reflection of that fusion as well.

How do you feel about new music from Africa and the Diaspora? Are there any artists from Africa you would like to collaborate with?

Music is so exciting right now. I am learning about new artists from Africa and new music from across the vast Diaspora every day. My favorite part is the fact that there aren't any boundaries. People are experimenting with different sounds, collaborating with different artists, and ultimately African music is marking its place beautifully on the global map at an inescapable pace. It'd be an absolute dream to work with the legend that is Hugh Masekela, whose music I grew up listening to alongside that of Miriam Makeba. I am also really feeling Black Coffee.  The snippets I've seen of his Africa Rising DVD look amazing.

These days I'm listening to more Zim artists including Synik and Tehn Diamond. There are also the bigger afrobeats artists such as Sarkodie and Tiffany, who are most definitely blazing their own trail for African music. With the age of information technology, a collab is only an internet connection away, so the potential for the growth of African music is excitingly infinite.

What is next in store for Soneni & The Soul?

Right now, we're in the midst of our Million Miles Away EP promo tour, so gigging A LOT. We'll have our own event in Camden (London) on Feb 27th featuring special guests, as well as headlining the legendary music venue that is The Bedford on March 12th. We're also getting new shows confirmed, so it's all incredibly exciting for us. The hope is to expand the tour across the UK, move out into Europe, and then internationally in the long term.  We'd also love to start working on our next EP at some stage, so do watch this space!