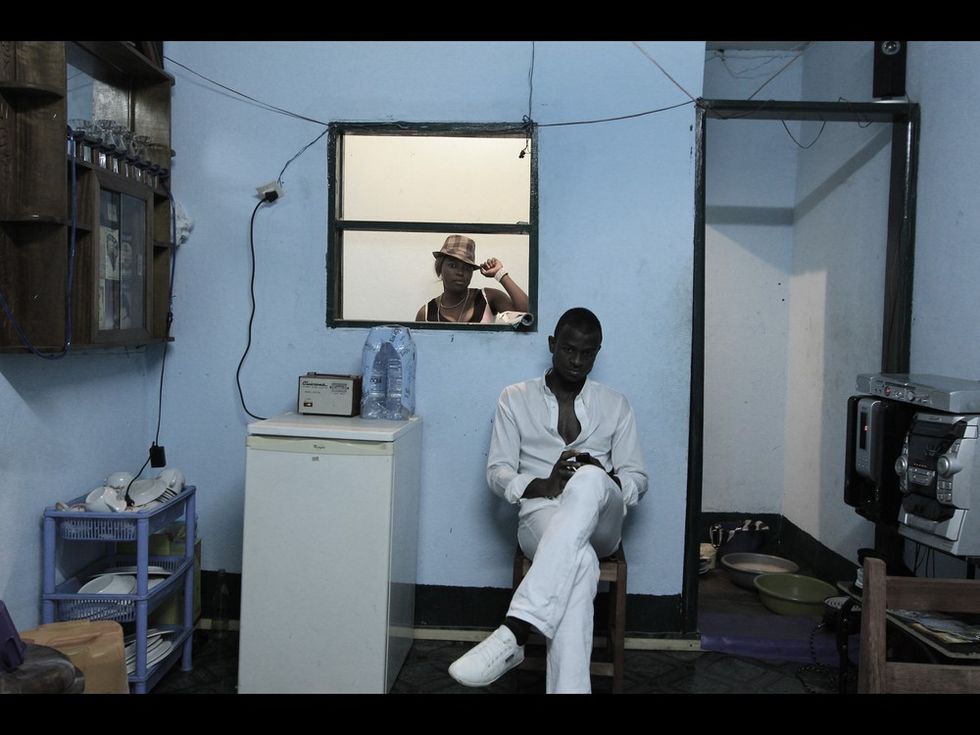 *"Be The Me" by Emeka Okereke

The latest documentary series from Al Jazeera English, Artscape: A New African Photography is a 6 part investigation into how photographers on the continent are confronting longstanding caricatures and misrepresentation of Africa and Africans by what we now prefer to call the global north. In the past Al Jazeera has invited politicians and recognisable writers from the continent onto their show Rewriting Africa to share their impressions of Africa, its future, and the hurdles that lie ahead on the unpaved footpath to being an “economic superpower.” In this new documentary series we meet 6 photographers from 5 countries on a quest to reclaim Africa from over 100 years of “photographic misrepresentation.”

The first episode (above) opens with a declaration: “a photograph is a window and not a view” by a horn-rim-Tom Ford-tortoiseshell-sunglass wearing 33 year-old founder of Invisible Borders – Emeka Okereke. Accompanied by a first time novelist, a Nollywood actor, a filmmaker, and a novice photographer the debut episode which can be viewed above, and on Al Jazeera’s website, is a 25 minute road trip from Africa’s most populated country to Mobutu’s Kinshasa, DRC. According to our guide Emeka, Invisible Borders “is a movement to give artists a space to define Africa for themselves.” The political borders that we rely on to separate one country from another and one region from another are rendered arbitrary and irrelevant- since it is rainy season across West Africa. Invisible Borders is an imaginary erasure of the 1884-5 Berlin Conference’s imposed territorial boundaries that consequently distorted Africa as a “geographically integrated” landscape yet left its people “…rivalling as Anglophone, Lusophone, and Francophone” according to Rhodes University academic Nana Bonsu-Amoako in her paper titled "Representations of Africa".

The series meanders twice through Nigeria then stretches to Kenya, Congo, South Africa and Mozambique. The second episode (above) premiered today April 29th and reflects on Kenya’s 2007 disputed election results which some agencies estimated had between 800 and 1500 casualties, mostly opposing supporters of Raila Odinga and then president Kibaki. Global news agencies characterised the violence in simple tribal terms, ignoring the complexities that characterise a society as diverse and as competitive as Kenya. Fashion photographer Barbara Minishi zooms-in not on the cause of violence but on the cloak that binds her country women; their shared lives and stories, emphasising unity and by extension national identity through her The Red Dress project. What about episode three, four, five and six? Does your point of view affect what you accept as normal? How do pictures influence your reality of the world?

Four decades ago gross misrepresentation and unfair international news flow led to a UNESCO debate chaired by Nobel Peace Prize laureate Sean MacBride. The term "New World Information and Communication Order" was coined then. In "Representations of Africa," Amoako says the debate centred on “objectivity in trans-national flow of information, inequality in information and fairness in news distribution.” As you would guess, delegates from the global south- poor Africa and its backward cousins Asia and Latin America, were the most irate demanding the overthrow of the distorted world information order, but how did they plan to change Africa’s image? James Michira’s 2001 study "Africa in the Western Media" provides a crude 7 point summary of the North’s image of Africa as it has been since slavery:

Africa is a homogenous entity

Photographers Baudouin Mouanda (Congo) and Geroge Ogodi (Nigeria) explore beauty in unlikely places. In South Africa we meet another photojournalist-turned-entrepreneur Neo Ntsoma, who weighs the impact of both Apartheid and Freedom. The series ends in Mozambique with Mario Macilau, whose sympathetic gaze into the lives of homeless people who live on Maputo’s rubbish dumps resonates with his own experience with homelessness.

Amoako suggests we need balance in a continent portrayed by its extremes. She says that balance can be achieved with African journalist, editors and production managers in the newsroom, the media, civil society, and citizens of Africa. If we use Amoako’s suggestion as a yardstick to measure the shortcomings of Al Jazeera’s project ‘taking control of how Africa’s is portrayed photographically,’ what do we get? For instance all participating artists are drawn from the same race yet we share this continent with other races too. Secondly, the omission of Northern Africa as if somehow it has been spared the colonial stereotypes, that there exists no political, cultural, and geographic ties with the ‘Real Africa’- sub-Saharan Africa? Third, the production team behind the documentary, 4 directors, a producer and a commissioning editor are they African- does it matter? The truth is Africa is diverse and not just black. The problem of representation particularly for our generation is not to cling to post-colonial narratives that are limited to finding fault only with mis/under-representation of blacks instead we should aim to generate, in partnership with our friends, an honest view of Africa and Africans.