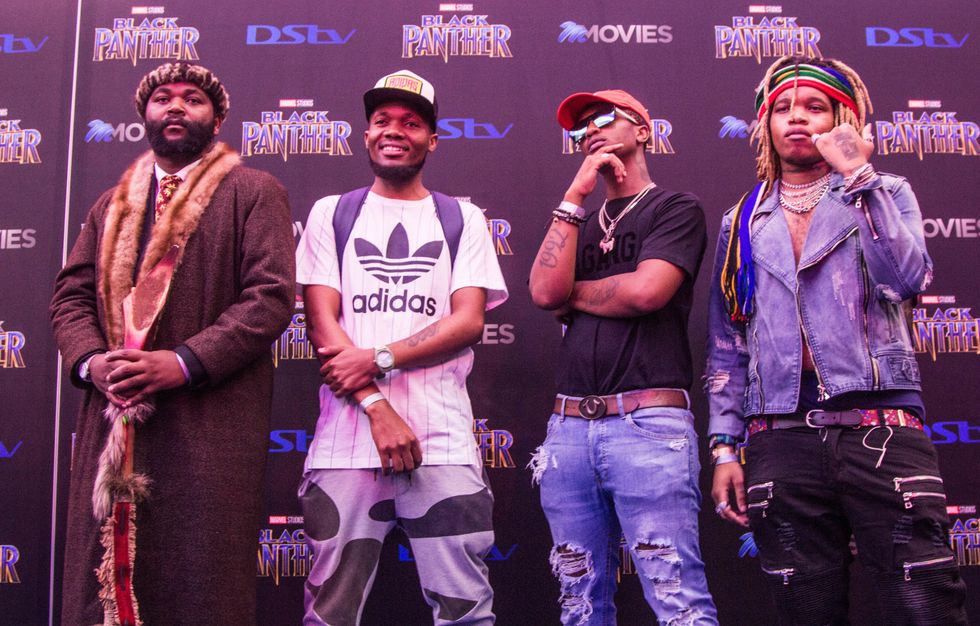 African trap music, known as ATM, is a South African sub-genre of trap which started around 2015.

It was pioneered by the artists Emtee, Sjava and Saudi. Emtee is the CEO of African Trap Movement, a label that's home to artists such as Emtee himself, Sims, Sjava and the producer Ruff. ATM consists of not just musicians but videographers, fashion designers, and more.

The future is bright for ATM, as it recently found two of its artists, Saudi and Sjava, on the Billboard charts via the songs "X" and "Seasons," which they contributed to in the Black Panthersoundtrack. Both Emtee and Sjava's debut albums Avery and Isina Muva are also certified gold releases.

"The whole concept is to inspire each other," said Sjava in the first episode of the ongoing ATM Documentary. "Even when you listen to the music, that's what you're gonna hear. If we are not inspiring each other, we are inspiring people out there. It's not just for us, it's something we started for the community, for the public. All in all, it's to motivate more than anything. That's our main focus—get up, go get it."

Below, are 10 songs that will help you understand what ATM is all about, listed in no particular order.

"Roll Up" is the song that started it all. It gave birth to the ATM genre. Emtee has since built on it and refined the subgenre as heard on his latest album Manando.

"Dark Dindy" sees the three artists showcase their related yet unique traits and talents. Sjava's verse is reminiscent of the way maskandi artists sing praises to a woman in love songs. The bass lines drone over 808s to remind you this is not a maskandi song. Emtee and Saudi's vocals are a cross between pop and hip-hop.

On "Make You Proud," Saudi wears his heart on his sleeve reminiscing about growing up in the hood, in a song whose focal point is the pressures of being young and black, while facing the pressures of not being a disappointment to your parents. Who doesn't relate?

Emtee introduced the first artist to be signed under the ATM imprint, Sims on this throwaway song that he released just before Manando. Sims' hook is emotional, and is relatable as he croons about living in a world that you don't feel like you belong in.

The three connect again in a song about making the best of your days while still in this here realm in light of the death of Swati, a homie of theirs. Again, the trio showcase their diversity and chemistry.

"Manando" is one of the best Emtee songs of all time. The storytelling is just insane—the artist paints vivid vignettes of another dead homie, Manando, who he named his sophomore album after. He gives us a glimpse into the life he lived, the type of person he was, and goes on to narrate the event of his demise.

"December" isn't your typical summer song about the festive season. Sjava prays things change, as the previous December wasn't the best for him. Emtee muses on the idea of being busiest in December when it's downtime for most of us. This has in turn led to him not being able to spend time with his family during that time. "December" is mellow and melancholic but it's also optimistic and can be therapeutic.

The opening song of Sjava's stellar debut album Isina Muva was a great introduction of what the artist is about. The bass line and kicks knock. The artist sings about a lover he misses and can't wait to reconnect with—a narrative that is prevalent in mbhaqanga and maskandi songs.

Sonically, "Plug," is as trap as it gets—big bass lines, high time hi-hats and 808s. It's a street anthem in which Emtee lets us in on his hustle, and lets us know all his goons are in Versace and that his hood fucks with him to the end.

"Ghetto Hero" is an inspirational anthem. Emtee says he aspires to inspire kids who are just like him—who grew up in the hood and want to go beyond its confines. Sonically, "Ghetto Hero" is different to the ATM sound we've grown accustomed to—the song is keyboard-driven with jazz legend Don Laka playing the keys, over a bass line by Ruff. It's in this song that Emtee's Afro pop influence shines.