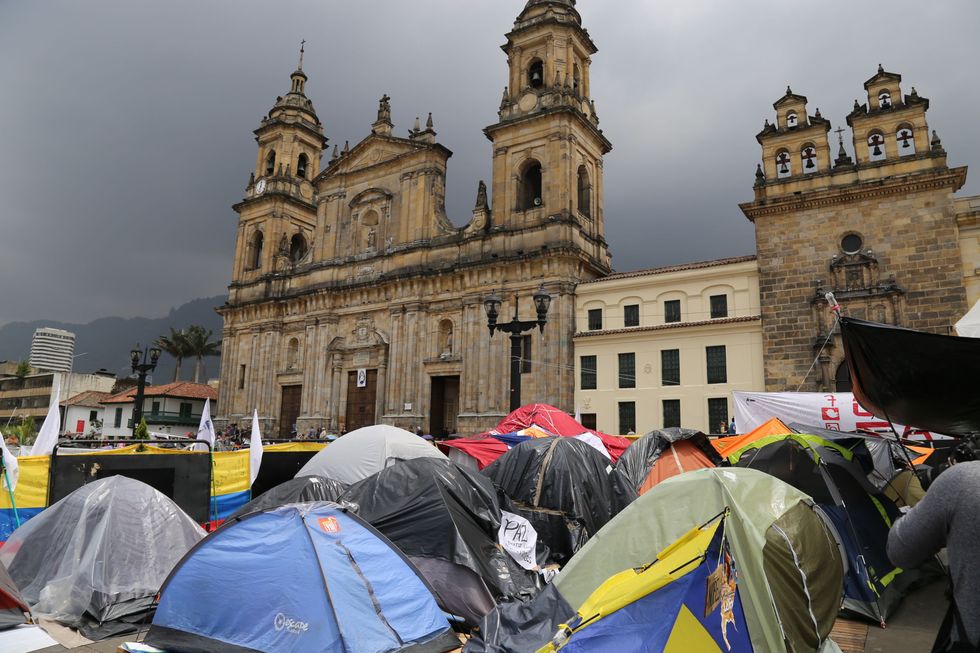 Pablo Medina Uribe delves into the racial politics of Colombia's no-vote last month where those most affected by the conflict—black, indigenous and rural Colombians—feel sold out.

On October 2, Colombia shocked the world when its citizens rejected in a poll, the historic peace deal between the country’s government and the Revolutionary Armed Forces of Colombia (FARC) guerrillas, the largest and oldest illegal armed group in the country. The country is now in legal uncertainty regarding what will happen with the peace deal but, with a low turnout of 37 percent and victory margin of barely 54,000 votes (0.43 percent of all votes cast) for “no,” supporters of the peace deal have not given up.

The next weeks, in what might be Colombia’s largest social movement in a generation, thousands routinely flooded the streets and squares of main cities to demand a solution to the political uncertainty. And, in these protests that have focused on victims and in the collective wish of ending five decades of conflict, black and indigenous Colombians have inadvertently taken center stage in the discussions around “peace.”

Those who voted “yes”

It wasn’t just international observers who were surprised. Colombians were also shocked with the peace vote result, as the “no” side had never lead in any polls, and for many a vote against disarming the oldest threat to Colombian democracy seemed like madness. As the results were revealed that Sunday, however, one particular fact stood out: many of the towns that had suffered the brunt of war against FARC had voted, massively, “yes.” Especially those with more diverse populations.

Memes started circulating online very quickly, many of them highlighting the names of towns famous for suffering violent FARC attacks that had voted “yes.” One of these towns practically became synonymous with the narrative that most of urban Colombia, alien to the plight of conflict, had rejected the peace deal, while rural Colombia, where the Colombian conflict has been brutal, approved it. This town was Bojayá, a small municipality in the Chocó region in the Pacific coast of the country.

The name of this remote town is ingrained in Colombians’ memories because. On May 2, 2002, it was here that the FARC fought the United Self-Defenses of Colombia (AUC) paramilitaries, launching an explosive into the central church, killing at least 74 civilians—some accounts say 120.

This attack came barely three months after the guerrillas had walked out of peace talks conducted with the government of then president Andrés Pastrana (now one of the campaigners for “no”). It cemented the negative reputation of the FARC and helped to elect the militaristic Álvaro Uribe Vélez, who promised to make the eradication of the guerrilla his first priority, as the new president on May 26, 2002.

On the day of the peace vote, however, Bojayá became synonymous with forgiveness. There, 95.78 percent of those who voted supported the peace deal. Immediately, Bojayá and the other towns that had gone through war and voted “yes” (like Toribío, a mostly indigenous town that suffered the most FARC attacks) became part of the rallying cry of those who took the streets to demand the implementation of some sort of peace deal. Four days after the vote, Bogotá’s Plaza de Bolívar was full of people chanting “Toribío says it, Bojayá says it: we don’t want war, we want peace.”

Being black, Colombian and a victim

But Bojayá is not only synonymous with those victims who wanted to move forward. Chocó is the Colombian region with the largest density of black or Afro-Colombians: 82 percent, according to the 2005 census.

Black and indigenous areas in Colombia are generally remote and underdeveloped and for many in the majority of Colombians (the 85 percent that describe themselves as “having no ethnicity”) the people of these towns might as well live in a different country. Two days after the peace vote, however, a group of victims from Bojayá reminded all Colombians that we share a country with a simple statement: “those who voted ‘no” are in debt with victims, you should see things from the eyes of those us who have been in the middle of this conflict.”

A week after the vote, five thousand indigenous people marched into Bogotá, where they were joined by thousand others who flooded Plaza de Bolívar once more. There, indigenous people, victims, and students claimed for peace and once again used the names of Bojayá and Toribío as a way to seek justice for those black, indigenous and rural Colombians who were let down by the peace vote. One of the few times when the inhabitants of Bogotá, the political and geographical center of the country, turned their eyes towards the periphery of the country. A rare and hopeful get together.

The politics of blackness

Not everyone saw it like this, however. On the days after the result of the vote, Uribe Vélez, now a senator and the key figure in the “no” campaign, rejected or delayed invitations from the government of Juan Manuel Santos to discuss what will happen with the peace deal, and instead toured the media to talk about his party’s proposals. He then took over a week to submit formal proposals to craft a new deal, even while many in the country from both sides demanded celerity and solutions.

Despite having said for months that he and his Centro Democrático party had identified punctual issues to be redesigned in the agreement that the Santos government and the FARC guerrilla had negotiated for four years in Cuba, Uribe asked for patience as he came up with proposals, as he said he had already mentioned many during the “no” campaign. Uribe then said that there were many topics to be discussed, and that they could not be discussed too quickly because some of the things included in the peace deal would dramatically change how things work in the country and because “Colombia is not an African tribe, it is a country of institutions.”

Though that last comment mentioned in the cable TV network NTN24 went under the radar of Colombian media, it did not go unnoticed by Afro-Colombians. Black Colombian academics, artists and organizers signed a letter criticizing Uribe for the racist undertones of his remarks which ignored the African heritage of Colombia, and undermined Afro-Colombian political organizations.

This was not an out of order complaint. Not only is racism a real, yet mostly ignored problem in Colombia, black and indigenous communities have been disproportionately hit by the country’s political violence.

What’s more, one of Uribe’s proposals is to greatly limit previous consultation, a political mechanism afforded to indigenous and black communities which they can use to stop projects affecting their already diminishing territories.

This discussion has developed mostly in silence under the many layers of problems brought by the “no” vote. But in the meantime, Santos has embraced the narrative of Afro-Colombians supporting peace to push forward his deal with FARC. Exactly one week after the vote, he visited Bojayá, where he said he’d keep working for peace. There, he also announced that he would donate the $930,000 he is to receive for his recently announced Nobel Peace Prize to victims of the conflict.

The next day, back in Bogotá, Santos announced to the country that the government had reached an agreement with the National Liberation Army (ELN) guerrilla to begin peace talks in Ecuador later this year. During the announcement, the President read a letter from Camila, a girl from Bojayá who said she and her family wanted to live in peace.

Since then many things have passed but little progress has been made, except for the fact that the bilateral ceasfire with the FARC guerrilla has been extended to December 31 and Santos has announced that he will try to pass the peace deal through Congress. What will happen to Bojayá, Toribío and the rest of victims of this conflict is still anyone’s guess, though.

Pablo Medina Uribe is a multimedia writer who covers politics, sports and their intersections. He’s the editor of Latin America is a Country and Unidos App, and the author of one book, one ebook and one interactive book. You can follow him at @derpoltergeist.