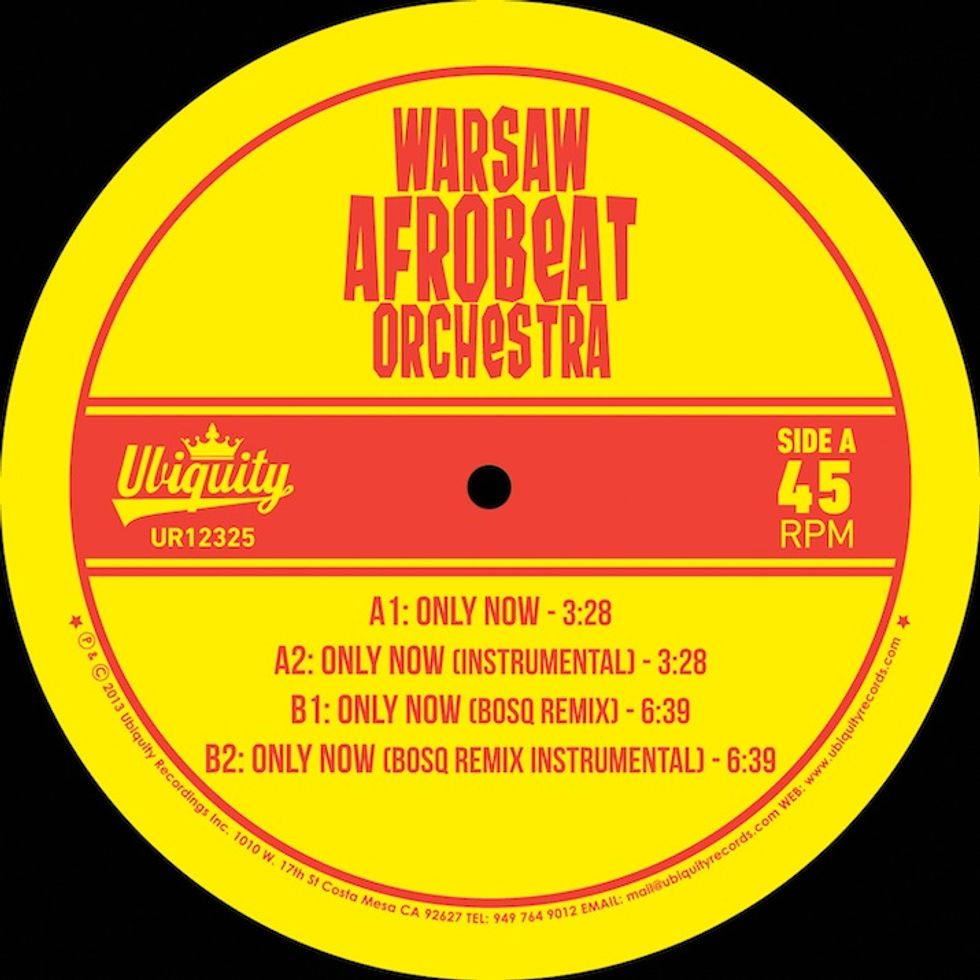 Warsaw Afrobeat Orchestra craft Afrobeat straight out of Poland, get to know them and grab an exclusive remix of their track "Only Now," from Bosq.

Ubiquity Records is never one to hold itself to a uniform sound. So when the label received a three track demo from the Warsaw Afrobeat Orchestra, a band from Poland who had recently formed, they jumped at the chance to sign them. "What caught our ears immediately were the singers and the interesting interplay of their vocals against a tough afrobeat rhythm," Ubiquity's Enrique Estrella told us, "It reminded me of 80s era female pop groups meshed with traditional African vocal melodies."

The original track boasts a simple drum rhythm, but it's bolstered by a strong horn section and arrangement. Vocally, it recalls Bananarama of 1980s pop music fame, as Estrella alluded to. The remix was produced by another Ubiquity signee, Bosq of Whiskey Barons, whose debut album just released in September. Bosq gave the track a house remix which complements the rhythmic horns. Okayafrica got to speak with band members during a brief Q&A. Here's what we learned:

Warsaw Afrobeat Orchestra: WAO was established in autumn 2012. That was the time when we began rehearsals and recordings. The idea of assembling an afrobeat band had spawned one year earlier. Within that time we were composing and gathering musicians.

OKA: What are your influences?

WAO: The musicians share many different musical interests. We’ve known each other for years and have cooperated along in many other projects. Thus the diversity of personalities and temperaments results in the kind of music we play. There are rock, jazz, folk, reggae and funk enthusiasts in this band.

We are obviously inspired by the masters of afrobeat and the world music scene, but we always try to contribute our own flavor into it. Tribal music of Africa is a precious source of knowledge for us too. It renders a broader view on afrobeat. Our lyrics are like repeated key words or passwords, which combined with the groove trance may give one a feeling of transcendental journey into individual impressions and reflections. [On] events... we' re planning further integration with African immigrants in Poland. Afrobeat hasn’t had its final word yet, and we believe it may become a quite popular music trend.

OKA: Can you describe the original song and its different elements as well as its inspiration?

WAO: The starting point for “Only Now” was an observation of a modern man in the world: the attitudes towards matters, nature and other people. We are terrified by the amount of negative news every day from the world of politics, business, sociology and culture. We should start the improvement from ourselves. Don`t waste your time. Don`t close your eyes.

“Only Now” is one our first compositions. First we had a sketch of music, then the lyrics, and finally its form. The assumption was that the groove was supposed to be the strong basis for the vocals arranged in a characteristic folk way without a distinct division into the main vocal and the backing ones. The guitar plays a vital role enhancing the rhythm section with its repeated phrase counterbalancing the bass line. The brass section, on the other hand, stresses the important fragments of the arrangements and it completes the vocals. The whole is harmonically fused by the sound of keyboard.

We also wanted to get the remix story, so naturally we reached out to Bosq Of Whiskey Barons, a self proclaimed drum "obsessionist." When you make a nice remix like this, though, you get to make up words.

OKA: How did the remix come about?

Bosq Of Whiskey Barons: Enrique (Estrella) from Ubiquity came to me with the track and asked what I thought of it and if I'd ever be down to do a remix.

OKA: What did you know about the group going into the remix?

Bosq: I honestly knew little to nothing about the band except that they seem super nice. I also just thought the idea of a crew in Warsaw playing afrobeat is fucking awesome.

OKA: What was your goal with the project?

Bosq: As a DJ I wanted everything to be more full, you know? More beef in the drums; more heft in the horn lines; a thicker, rawer bass line.

OKA: So how did you go about achieving that?

Bosq: I decided to rebuild everything around the horns and vocals. I started with the drums and worked those into an Afro-disco rock feel that I used to guide the rest of the track. I played a new bassline, some organ, and rhodes parts to feel more Afro-disco. I then added a stack of sax parts with my tenor, which I think helped round out the horn section. When I was messing around with my sax, I figured out a couple of simple riffs I wanted to add to the verses, then chopped their lines to match what I played. I was happy with how natural it ended up sounding!

The full 12" releases on November 19th on vinyl and digital formats, with Okayafrica getting an exclusive premiere of the remix. A free download of the Bosq remix is available right here for the next 2 weeks! Accompanying the remix and original versions on the 12" will be instrumentals of each track. The band's full album, as yet untitled, is slated for 2014.