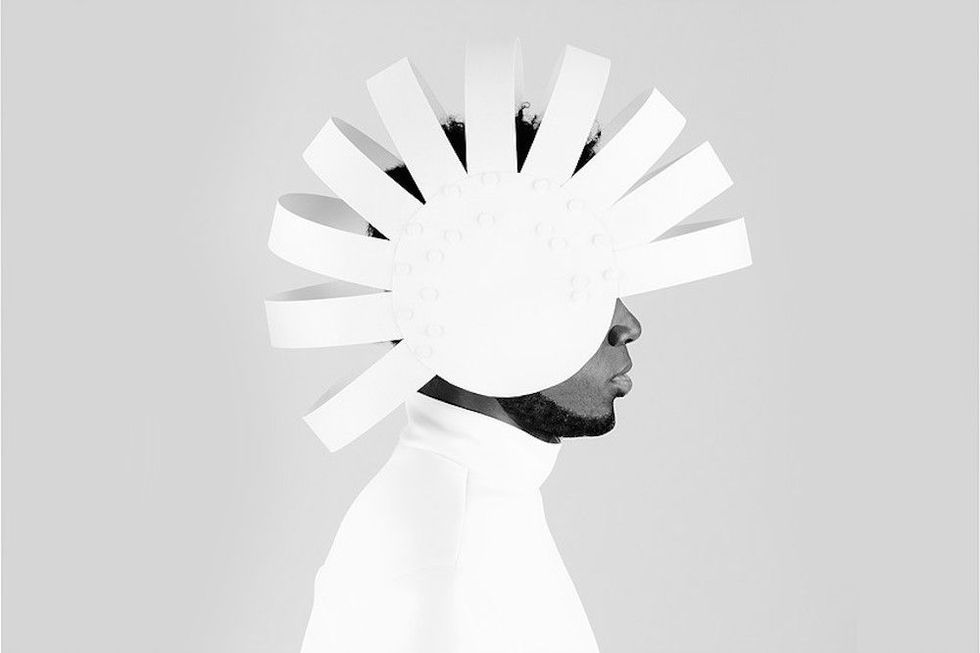 We talk to Afrotronix, the producer blending Chadian popular music with dubstep and deep house to create a potent club sound.

Take club beats, pair them with Central African rhythms, and you get the sound of Afrotronix.

The Chadian-born producer creates dance tracks influenced by a style of Chadian popular music called sai, which he blends with Mbalakh rumba (Mbalax), Tuareg blues, and elements of dubstep and deep house.

The result is a potent club sound that’s been gaining traction in his home base of Montreal and abroad—Afrotronix recently headlined the Afropunk Fest in Paris.

It’s also a sound that’s meant to reflect the multiculturalism found in Montreal and other modern-day metropolises.

Donning an all-white outfit and his signature helmet, which looks something like a highly-stylized combination between Alien and Sonic The Hedgehog, Afrotronix embodies the futuristic outlook of his productions.

Below, we talk to the Chadian producer about his project and his new music video for “Soudani.”

I was born and raised in Chad. I moved to Montreal, Canada a few years ago and [have] now been traveling the world with my project, trying to use my music as a medium to carry a Pan-African message and showcase a different image of Africa.

We can and we must redefine the future of Africa and push the African music scene, aspire to a more futuristic view which is to me the idea of emancipation.

Most people only see Africa as a third world territory or think of African music only as world beat, tradition old music. It's time to show the world that we have a new generation of Africans who are here to show how dope our culture and music.

Simply, to show that Africa is part of the world and that the continent is a huge creative ground in all its diversity.

Let's talk about the helmet. How did that design come about?

It came from a mask we call Dôme in Sara (my language), it’s from an initiation called Ndo, boys wear it when they come out of the bush. So it’s something sacred.

I designed it myself with the help of a friend and consider it attractive headwear. It also allows me to the immerse myself in my music and keep my concentration when playing or mixing on stage.

What rhythms influence the Afrotronix sound?

I've always experimented with electronic music but at the same time, I was always looking for ways to incorporate my sound with tribal African sounds like Mandingo, Touareg blues and Chadian sai. I think that Afrotronix is a natural tribal mix of all these sounds.

The advantage with the digital sounds, is the fact that I can reinvent, explore endlessly, and experiment with new stuff. I'm very happy that I finally found the perfect way to mix my African influences with electronic music.

What inspired this new music video for “Soudani”?

The video portraits that idea of the perfect life that most Africans have when they think of America. They think once you come here everything becomes easy but unfortunately reality strikes and they find themselves caught-up in the vicious circle of debts, chaos and everything that comes with this fast life.

Is there a growing scene for African electronic music in Montreal?

I think that the African electronic music scene is still a little bit underground everywhere...Nigeria and Europe have a big music scene. America is catching on right now but for Montreal, it’s slowly getting there.