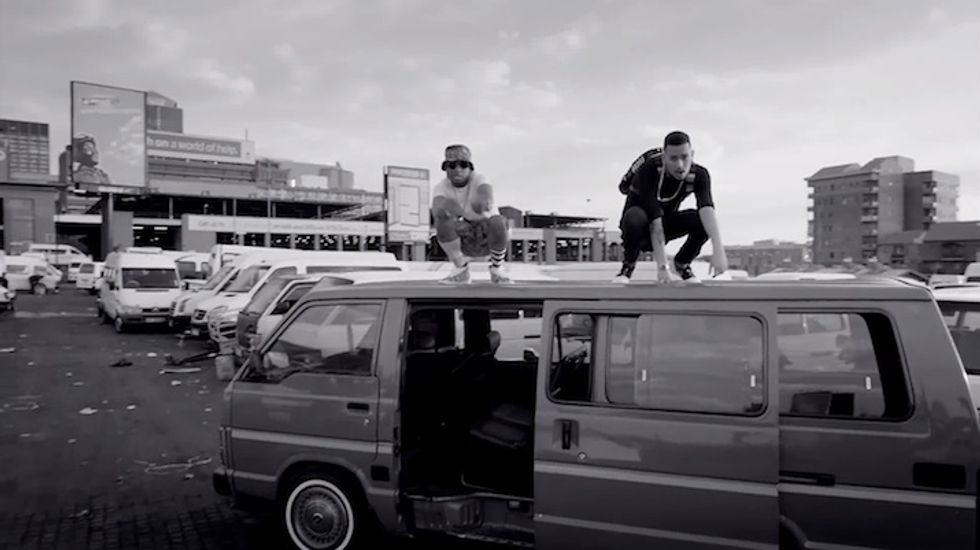 Watch South African rappers AKA and K.O.'s video for 'Run Jozi (Godly),' directed by Yanga Ntshakaza. The song is off AKA's 'Levels' LP.

Two of the most charismatic emcees in the South African mainstream hip-hop scene, AKA and K.O. traded braggadocio bars over loud horns courtesy of Soweto-based producer Tweezy on “Run Jozi (Godly)”. The song, which is extracted from AKA’s latest album Levels, has just been treated with visuals. Monochromatic in nature, the video was directed by Yanga Ntshakaza, who also did the hook though doesn’t appear on the song credits. “We decided that although he doesn’t have a feature on the song, it would be important that Yanga was in the video because people keep asking ‘who’s doing the hook?’” explained AKA on a behind-the-scenes video of “Run Jozi (Godly).” Containing cliché shots like the three rappers doing their thing in front of some fancy automobiles, the video, which was shot on the Mandela Bridge and the nearby Bree taxi rank, shows the grimy streets of downtown Jozi. The two emcees add a different dimension to the grimy part of the city and exhibit their personalities in front of the camera and to onlookers. AKA Instagram followers might remember the hype he generated with images of him and the video crew closing down Mandela Bridge for the video shoot. Watch below and decide whether or not the video lives up to the hype.