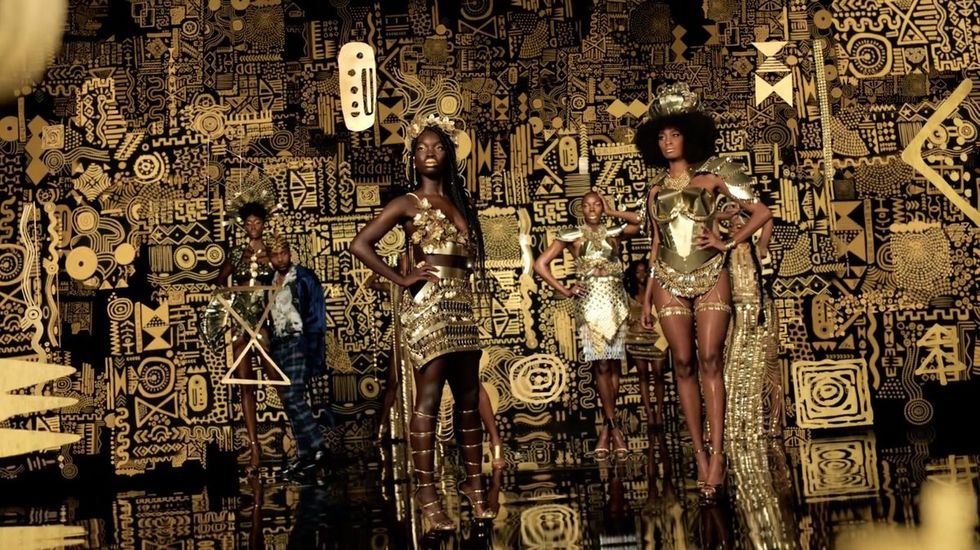 The British-Liberian artist claims her work was used without her permission.

The New York Times reports that British-Liberian artist Lina Iris Viktor claims her work was used without her permission for the music video for "All The Stars." The video is of a song taken from the soundtrack to the upcoming movie Black Panther.

On Saturday, Viktor's lawyer, Christopher Robinson, sent a letter to Anthony Tiffith, CEO of Top Dawg Entertainment, the label Kendrick Lamar and Sza are signed to, and one that is releasing the soundtrack. On the letter, Viktor alleges that the gold patterns on the video were lifted from her artwork titled "Constellations," and used without her permission.

We knew this looked like Lina Iris Viktor’s work when All The Stars dropped. That she was allegedly approached twic… https://t.co/dxpj9QTvgn
— Asanda Sizani (@Asanda Sizani) 1518415289.0

Read: Here Are the 4 South African Features In The 'Black Panther' Soundtrack

The letter also states that Viktor was approached twice by the film's creators to use her work, but she refused both times. The letter further states that Viktor is wiling "to discuss a resolution of all her claims, consisting at a minimum of a public apology for the unauthorized use and a license fee."

Viktor was quoted by the New York Times as saying:

"Why would they do this? It's an ethical issue, because what the whole film purports is that it's about black empowerment, African excellence—that's the whole concept of the story. And at the same time they're stealing from African artists."

According to the New York Times, Kendrick Lamar, Anthony Tiffith, and Disney declined to comment.