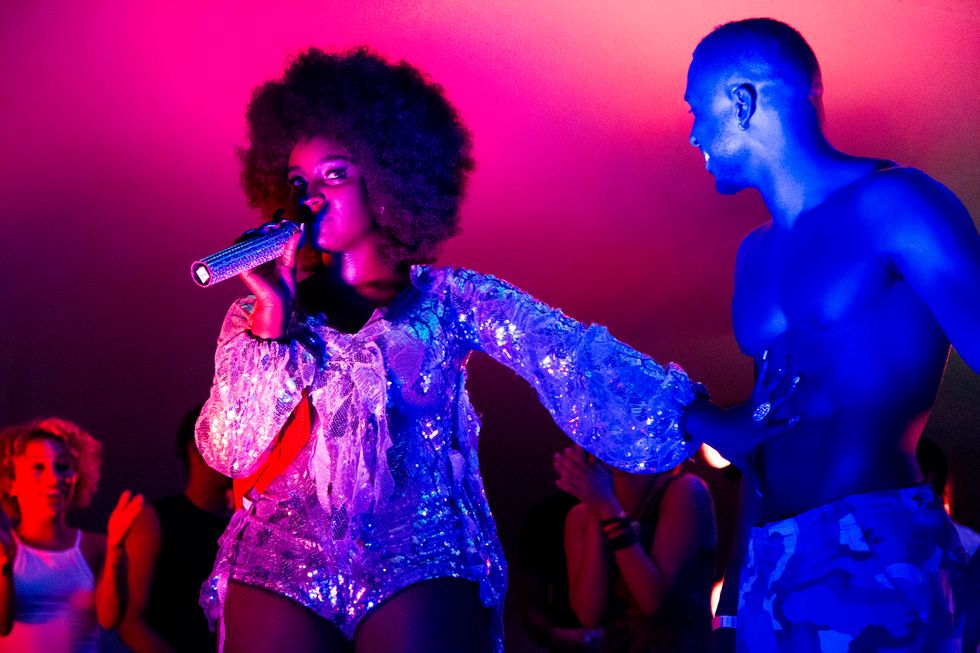 We catch up with Dominican singer, Amara La Negra, at the 2017 Afro-Latino Festival of New York.

“Her energy is amazing,” gushed Hinds, the evening’s headliner, from the stage before announcing a future collaboration, a fitting gesture for a festival with this year's theme, "A Tribute to Women of the Diaspora."

A few days earlier, we caught up with Amara at a rehearsal space on the West Side of Manhattan, as she prepared for her festival set with her backup dancers and frequent collaborator, 2nyce. This rising star in the Spanish-speaking music industry looked thrilled to play the festival, telling us, “It’s an honor that they even thought of me.”

Amara La Negra and 2nyce at the Afro-Latino Festival of New York. Photo by Tatiana Nancy.

The two-day festival highlights afrodescendientes in Latin America with panels, a film festival, an award ceremony, and a full day of music and vendors.

“It’s beautiful,” says the 26-year-old Miami-born, Dominican artist. “There’s so much diversity when it comes to Afro-Latinos that it’s just beautiful when we can all come together and share our differences.”

Perú, the Dominican Republic, Brazil, Cuba, Panama, and Puerto Rico were all represented at the festival, which is in its fifth year. “There’s not a Latin country that doesn’t have people like us,” Amara adds.

The theme of the festival is especially important for her—“I like to empower women as much as I can,” she says. “I think women, we’re powerful, we’re strong together.”

Celia Cruz, the Queens of Salsa, is often the example Amara cites as inspiration for the kind of strong persona with which she aspires. “Celia is everything to me,” says Amara. “She was the only Afro-Latina that made it world-wide.”

Amara has taken on a similar role, unapologetically celebrating her African roots. “I really try to embrace my color to open doors for new generations,” she says.

The doors to which she makes reference are often closed due to the persistence of anti-blackness in Latin America, including the Dominican Republic where Amara’s mother is from. “I have to fight to be embraced...I have to work twice as hard for my talent to be noticeable because of the way I look,” she tells us.

Her image, especially, makes her a target for racist acts. In September of last year, for example, a former Dominican beauty queen, Geisha Montes de Oca, wore blackface, an Afro wig, and butt pads to portray Amara during a taping of her show.

“There’s a lot of racism among Americans, but in the Latin world, it’s worse,” explains Amara in a recent interview with Latino USA. She goes on to share some of her early experiences in show business, such as a six-year stint on Sábado Gigante as a young child.

Nevertheless, Amara has worked tirelessly on her career, which includes a clothing line and acting credits. More importantly, she has developed a following in the Dominican Republic and throughout the rest of Latin America. Just days earlier, for example, she was in Ecuador for a short tour. In December of last year, she also traveled to the Africa for the first time, and performed in Equatorial Guinea—the only country on the continent in which Spanish is an official language.

“I always dreamed of performing in Africa at some point in my life and I didn’t think it would happen so soon...They all spoke Spanish, they all understood my music,” she says. “It was fantastic.”

As far as what’s next, there’s a busy schedule ahead for Amara, “I like to keep myself busy, I always find something to do.” She continues to promote her latest single, “Se Que Soy.” She is also planning to tour Latin America, with stops in Colombia and Peru most likely in the near future. In addition, Amara will appear on the VH1 reality show "Love & Hip-Hop: Miami," which will debut next year.

She made the surprise announcement during her performance at the Afro-Latino Festival. And as an exclusive, she tells OkayAfrica her next single,“Wata Bam Bam,” will be released in early 2018.