Anitbalas’ Afrobeat Alchemy at the Kimmel 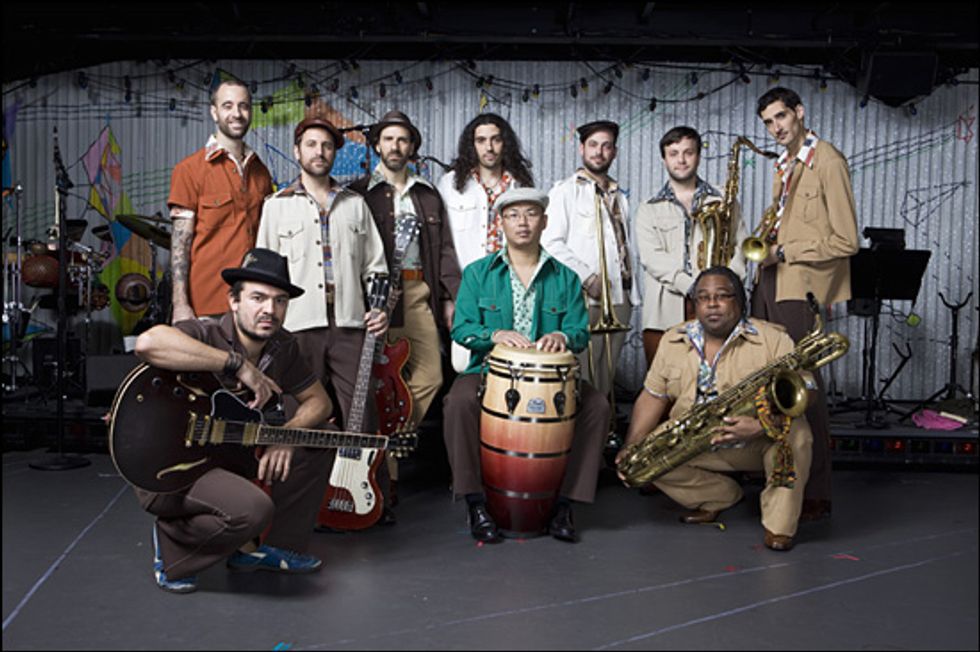 Alchemy is an ancient art that concerns itself with, among other things, the transformation of base metals into gold. Popular recipes included varying proportions of silver, copper, tin, and other substances; not surprisingly these failed to produce authentic nuggets.

Nowhere in the alchemist’s recipe book does one find bari sax (or other necessary brass), snaking bass lines, congas, shakere, funk guitars, and endurance reaching near Samuel L. Jackson levels. All of these were in ample supply when the Antibalas Afrobeat Orchestra played the Kimmel Center’s Perelman theatre on Thursday.  Follow me after the jump for the full review.

It’s hard to over-estimate how tight Antibalas is live. While the majority of present-day dance music has an electronic foundation Antibalas creates a thick hip magnetizing funk without the aid of laptops or MPCs. Watching ten people organically create such powerful, sophisticated, and danceable music is a rare pleasure.

Antibalas has been at the helm of the afrobeat renaissance and is in large part responsible for the emergence of afro-beat in the new vocabulary of hip-hop. The cyclical fetishes of hip-hop production are well known and are, for the most part, uninspired (e.g. the Indian sarod loop that was in everything for like a year, rapping over Daft punk songs). Antibalas and groups like them have been shining a light on where some of the future’s most vital hip-hop may reside.

The evening’s set included jams on tunes from throughout their five album catalog but mostly from Security [Anti, 2007]. They also threw some new tunes in their set and closed with an atomically funky Fela jam.