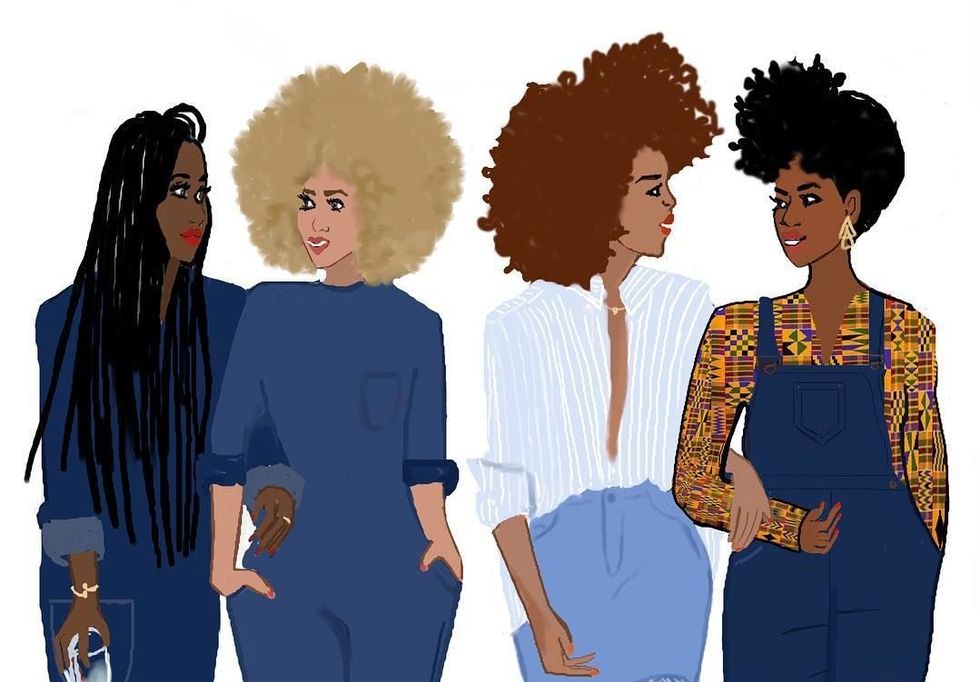 In the latest edition of our series, we catch up with illustrator Nicholle Kobi on the purpose and process of her work.

Nicholle Kobi is a black French illustrator whose work oozes black girl magic. Her drawings celebrate the plurality of black women. In a day and age where we are still not held in high regard, she celebrates our curves, skin color, hair texture, and style.

Born in Kinshasa, Congo but raised in Normandy, France by her father, she has a voice that is both unique and strong.

“I think I have always been an artist. The weird one. The crazy one," Kobi says.

"My oldest memory about drawing was when I was 5. I was drawing on my stepmother's Amina magazines. It was black and white. When she was finished reading them I would draw on the women's faces and change their clothing. I studied art in middle school. Everybody hated art but I loved it. I loved to draw. People see art as recreation. I took it seriously. I went to an art school for high school. We studied 10 to 15 hours of art every week. My father always told me I had to attend Beaux-Arts (one of the most notable art schools in France) in Rouen or Paris. I wasn't accepted into the school but I moved to Paris to study art history, fashion design, and modeling in a preparatory program."

With her heart set on art but a lack of encouragement, Kobi gave up this dream. She was lost. Her father was in the middle of a divorce and her teachers told her she would never find a job if she continued on the path she was on. She switched gears and studied banking and insurance. In her roles in the business industry, she was miserable. She would work 2 years in companies and grow so weary she jumped ship. She fought her desire to do something something creative as she doodled on her contracts.

In the last company she worked at, salvation came in the form of pregnancy and being put on bedrest. While home, she needed something to do. She REALLY drew for the first time in over 10 years. The mother of two, at the time, taught herself photoshop and graphic design. Her first post on Instagram quickly gained traction and the rest, well, is history in the making.

Kobi is now 4 years into a career as a black illustrator who draws black women in a France that isn't ready for her. “French black people are taught to assimilate," she says. Where African Americans and blacks everywhere but home embrace her with open arms, there she is met with, “You can not openly draw black people. You must draw white people." It is still very much a society in which you must adhere to white standards.

Her peers want to be approved by their white counterparts. They have to love France more than their white counterparts. They must never criticize it. Kobi notes the France she comes from “is not ready to see a group of successful black women. They are not ready to see black love. Seeing a black family means you have a black husband and black children. In a group of white people, you will always have one black friend, not two or three. This is how France has built the black French mentality. On television you will never see a normal black couple but you will see mixed couples." The most successful black bloggers in Paris are married with white men and display their mixed children on their platforms as though they are trophies. Black parents say things like, “Get married with a white guy and you will be good." She is combating the aforementioned. “This is the result of colonization," the artist affirms. She recounts going to a Christmas party with her family and asking for photographs of them she assumed had been taken, later on. To her dismay, the photographer sends her an image of mixed children and is confused when told these aren't members of her family. Her greatest pride is having black children. “My children are the only black children with two black parents, from my generation, at their school," she says.

The French idea of assimilation asks immigrants to abandon their cultures because it holds there isn't unity in diversity. It creates identity conflicts that go so deep it would take a book or three to explain them in a way that makes sense. The above simply scratches the surface of what it's like to live in the country. Art like Kobi's is critical in such a place. Her work resonates with me because I am a Cameroonian woman born in Paris. My immigrant parents navigated through the France she speaks of and on many occasions, my mother has encouraged me to marry outside of my race so as to “be good." I have a friend of Ivorian and Senegalese descent who was born in and spent the majority of her life in France but refuses to identify as French. “They don't accept us. I am African. They will never accept us as French," she says. Surprisingly, the majority of the racism Kobi has experienced in Paris has come from Northern Africans, which is more painful because you wouldn't expect such from them. It is obvious France has a long way to go.

You would think combating an ideology like assimilation has got to take some mentoring, right? When asked what women have inspired her, the illustrator says, “I didn't have any close female figures. My mother wasn't in my life and my stepmother and I didn't get along. I am surprised when my kids say they idolize me." Despite not having a woman mold her into who she is, there was a moment that changed her, “When I was 10 or 11, I was watching a documentary about African American history. I saw a woman on sitting alone on a bus. The man spoke about Rosa Parks. I was so shocked to see this black women on a bus being yelled at by white men. I cried. I wanted to be her."

The artist laughs as she controversially states the French will throw fits when they hear her say, “I love women's history. I recently read a book about Kimpa Vita who fought against Congolese colonization. I love to hear about strong women. Black women are more powerful than they can imagine. I love to learn about black women. I don't care about Simone De Beauvoir. Marie Antoinette doesn't interest me. Coco Chanel doesn't interest me. I am sorry to say this. Black women sacrifice their lives and no one talks about them."

Kobi is pushing forward despite the challenges she must face. To her, the most difficult aspect of doing what she does is, “To keep creating. To be creative. There is an evolution in my art work from where I started to today. If you are afraid to try new things, you will be old fashioned. People look to creatives to surprise them, especially black ones." With work that embraces black women, there leaves room for the inclusion of men. She reveals, “Before I came here, I started drawing a group of black men. I look forward to finishing it but it needs to be perfect."

In the near future, Kobi hopes to open a studio in New York, work on an animated series, and launch a capsule clothing collection.

She may or may not have already inked deals with two major greeting card manufacturers. Shhh…

Catch Nicholle Kobi on the second half of her art exhibition tour, keep up with her on Instagram, and her pieces are available for purchases here.