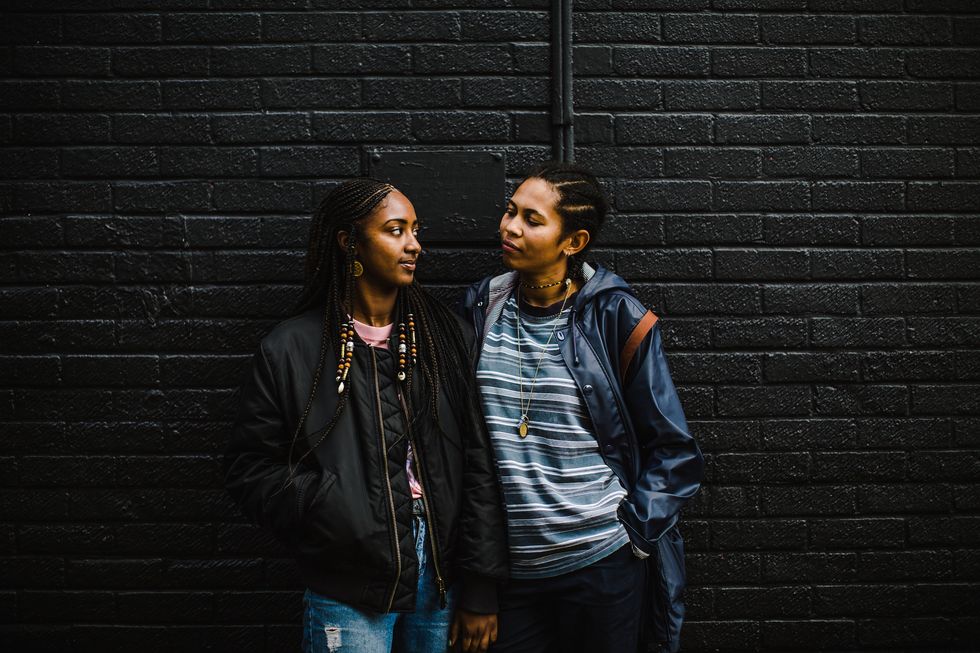 How do we hold onto identity in a world full of expectations about what you do with your private parts.

Asexual pansexual—the title reads like that of a bad poem and in a parallel universe it may very well be but for now, it is the one I carry. One I use so those around me can identify/roughly guess what I do with my genitals and heart (but mainly my genitals). With the title, however, comes the weight of having to live up to what I claim to be. To perform, for lack of a better term, my queerness in order to prove to the world that I am, in fact, what I say I am.

Sex is supposed to seal the deal on your identity as a queer person. While romantic relationships matter, it's sex that seems to be what people think of as "actual intimacy." And yet at the same time if one only has sex with people of the same sex and never dates them, their queerness is once again called into question. The term "freak" and "nympho" are thrown around to render one's queerness as merely a carnal proclivity—nothing to be taken seriously.

Over the past year I've had to face something I've ducked and dodged for most of my adult life—my attraction to men and its origin. My first love interest was not a man, nor was my first sexual experience. In fact, I had no interest in being with a man until someone told me what I was doing, being with girls, was unnatural according to the Bible. Now, while I was not a Christian I knew that the Bible held weight and therefore thought it must have been right on some level. After all, my mother was with my father, my aunts had husbands. I assumed heterosexuality was in fact the "Great Design" and I was merely a deviant, and so I tried my best to correct it. From then on I dated men, slept with men and suffered through many a shitty relationship because I felt that was what I was supposed to do.

Despite learning about heteronormativity, the Bible and its various origin theories and coming to understand how queerness fits within my society and environment, I'm having a hard time understanding myself as a queer woman. While I identify as queer, sex seems to be a huge part of "proving that" and since I'm celibate it's caused me a lot of internal turmoil.

Over the past couple of months my sex drive has dwindled and I dare say, eventually died. There are various reasons as to why I think this has been: sexual trauma, antidepressants, being overly aware of the violence I face at the hands of men and last but not least the stark realisation that the majority of people in my environment and generation give nary a fuck about their sexual health. Simply put, I'm terrified. I'm terrified of the men I'm told I should want and I must admit, I'm also wary of returning like the prodigal daughter from the "Land Of Dick" to relationships with women. Women who, like me, have performed straightness to fit in for so long that as young adults, we don't know what to do with each other and the freedom we now have to exist in the world as we see it.

The women I have dated cannot help but to try and figure out "who the man is" in the relationship because we already know someone will ask and it's easier to say a name than explain that there isn't one. We're scared to be intimate without inebriation because alcohol makes the hands fumble less and above all else we are terrified to get to know each other as lovers, not just sexual partners. Despite feeling safest, physically and emotionally, with each other, we are scared to give ourselves to another woman the way we so carelessly throw ourselves in the arms of the first man to claim love.

I fear I have not been honest to, and about, myself and I have no idea how to start now. I wonder if I have to love everyone on the spectrum at least once in order to claim my identity and if so, how, when I have no desire to "be intimate" at this stage in my life, knowing that for many, that will be an expectation. Every time I think of myself as a queer woman the various biases I've heard echo in my head and yet finally, thankfully, I know I can no longer continue to pretend men are the end all be all of my existence. In reality, they are merely extras in the play.

Yes, if my life is a performance, men are actors dressed up as ghosts and burning bushes and I, the director, have unfortunately spent years recording only them and for what? To feel "safe" as a straight passing woman? Ironically, being around the men I have dated and on occasion loved never did anything to keep me any safer than had I handed myself to a pack of wolves. As I look back on my life I question many things, but loud as ever, the one recurring question is whether my feelings are authentic and valid. Am I returning to what I think is my true identity because I feel scared and scarred or was fear the wakeup call I needed? Did the curtains catching on fire remind me that I was merely an actor playing a role, dressed up and fucking as a straight woman, and I am in fact, not that, and it's time to take the costume off and go home?

And if so, can I go home without having to stain the sheets in order to make it feel like home? For once, I would like for my intimacy to not feel like a performance, and instead, for it to be an experience. One I can completely immerse myself in without wondering how I look. I would like to not feel the burden of the labels, and simply, be queer. Not with my vagina, or my mouth, or my heart but wholly and presently. I would like to no longer feel like the woman I am is a character playing a role, because if it is, what was any of this worth once the curtains close?