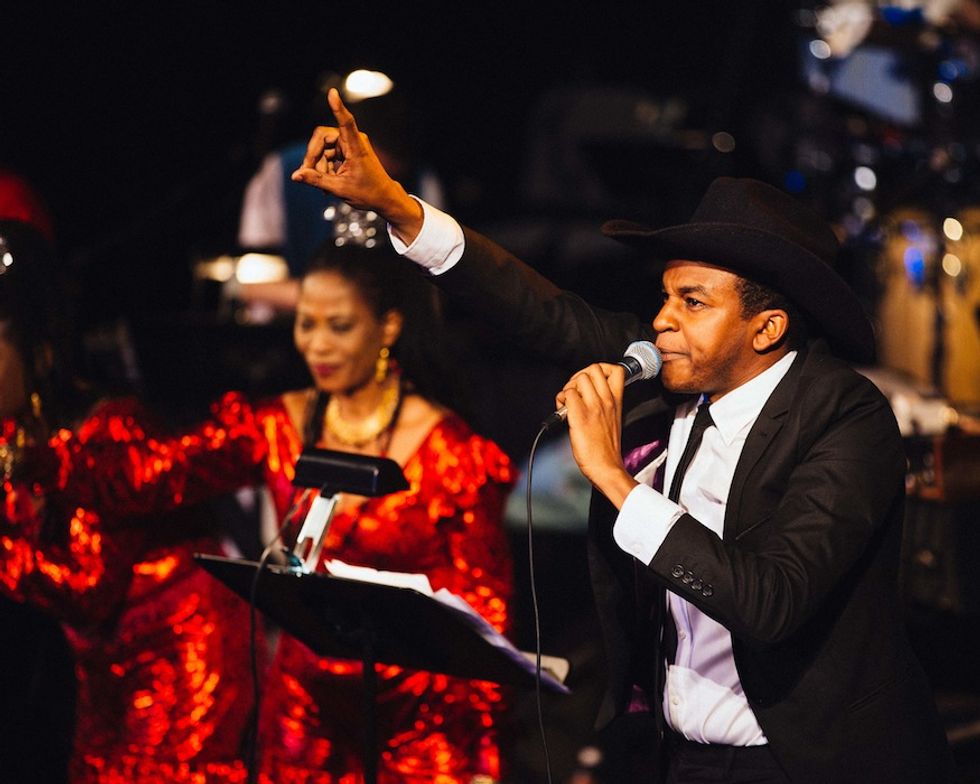 As promised, Luaka Bop's Atomic Bomb! The Music Of William Onyeabor hit stateside this weekend as a part of Red Bull Music Academy NYC at BAM. Far more than a concert, the live tribute was a 2-hour incarnation of one of our favorite releases of the past year — a larger-than-life realization of everything we've come to know and love from Onyeabor mania right before our eyes. The sermon of reimagined electro-synth fittingly began with words from NYC street preacher Rufus Cannon before the Atomic Bomb! band launched into a tantric-funk rendition of album opener "Body And Soul." Musical director Ahmed Gallab of Sinkane started on the mic backed by the full Atomic Bomb! house band, featuring a very bouncy and delightful Money Mark on the keys, Pat Mahoney (LCD Soundsystem) and Jay Tram on the drums, a crowd-pleasing percussion section with Lekan Babalola and talking-drum player Kofo the Wonderman, bassist Ish Montgomery, and guitarist Jonny Lam. One song in and the three-tiered BAM opera house was on its toes.

From that point on, the night became a dream list of live collaborations and surprise tricks, including an appearance from New York subway dance crew W.A.F.F.L.E. NYC. First up came the silky-smooth dancing of Blood Orange mastermind Dev Hynes, who was soon joined on stage for a high-powered duet of "Good Name" by Hot Chip frontman Alexis Taylor.  The Lijadu Sisters, fantastically dressed as ever, reunited on stage with a show-stopping performance of "Fantastic Man" alongside David Byrne and Central Park's phenomenal rollerskaters. Later on, the sisters would play a a rendition of their 1976 hit song "Danger." Donning the brightest of the ten-gallon hats, Talking Heads frontman and Luaka Bop founder Byrne brought his virtuoso-like presence– though perhaps even more incredible to witness was the fact that he remained on stage as a supporting member of the Atomic Bomb! band  throughout the duration of the night. The supergroup orchestra came out in full force one last time for an ultra high energy, Dev Hynes-fronted "When The Going Is Smooth And Good" finale. On that note we tip our hats off to the whole Atomic Bomb! band for bringing the music of William Onyeabor to its full spiritual potential live in NYC 30 years after the fact.