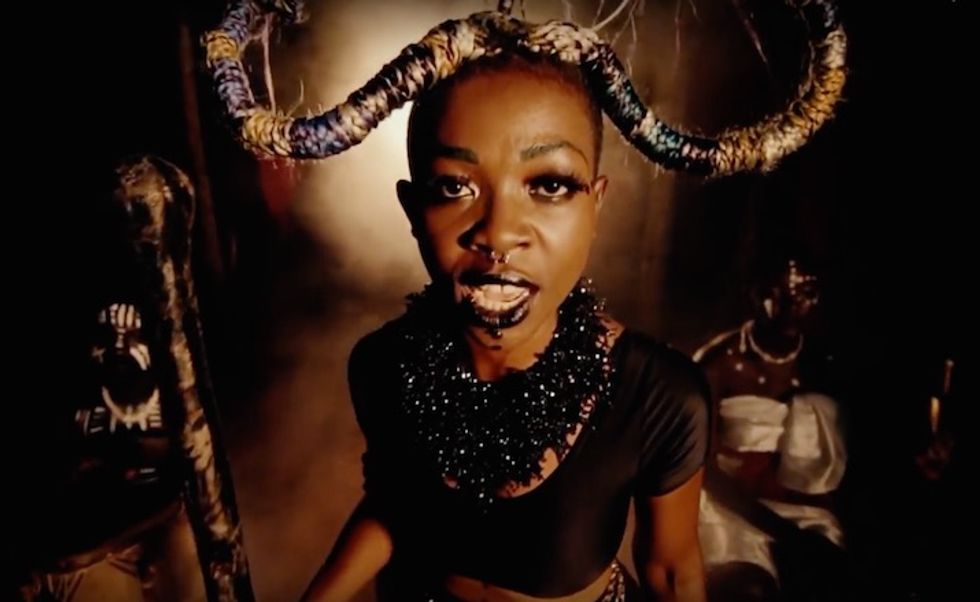 Ghanaian artist Azizaa and Wanlov of the FOKN Bois tackle issues of religion in Ghana with the new song and video for "Black Magic Woman."

Is Ghana too influenced by Western religion? Budding Ghanaian singer Azizaa and Wanlov the Kubulor of the rap outfit FOKN Bois would argue that it most certainly is. They tackle this "religion issue" in their new song and video "Black Magic Woman," a satirical offering in which the two openly critique Christianity, which they believe has a damaging, colonial clutch on many Ghanaians. "It is a perfect self-perpetuating system," says Wanlov, who directed the video, in a recent interview with the FADER. "They took away our spirituality and gave us religion; they banned us from gathering under a tree by the fireside and herded us into churches."

In the booming, percussion-laden track, Azizaa proudly declares herself a "black magic woman from the African jungle," and challenges monotheistic religious notions by referring to otherworldly entities and embracing ideas commonly associated with pre-colonial, Ghanaian spirituality. The accompanying music video begins with a young woman rejecting the propositions of two overbearing evangelists and joining Azizaa in a "juju" ceremony. The two enthusiastically deject the zealots in the same manner that many Ghanaians have cast down non-Western spiritual practices. Through this, the song raises questions regarding the willingness of some Africans to accept Western culture and religious practices over "traditional" customs. "How can anyone of African descent be worshiping the same tool used to uselessly murder their ancestors?" asks Azizaa. Watch below as Azizaa and Wanlov explore this question and more in the video for "Black Magic Woman."