Sierra Leone Rapper Bajah On The Ebola Crisis: Too Little Too Late 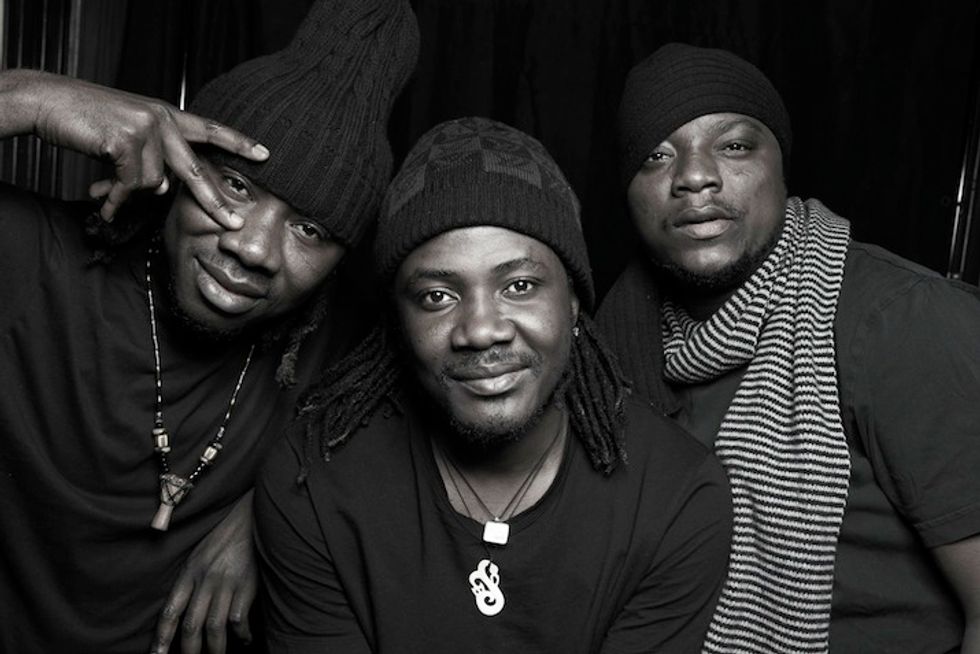 Sierra Leone is currently in the throes of the worst Ebola epidemic in history. Last month, in an attempt to halt the spread of the deadly virus, the national government quarantined its entire population for three days. Despite this, and the recent more robust international efforts bring the crisis under control, the number of Ebola cases could reach 5,000 to 10,000 per week by December 1st.

Recently we went to visit Pupa Bajah, the nationally renowned Sierra Leonean rapper of Bajah + The Dry Eye Crew, who anxiously watched a repeat of a soccer match, tightly gripping a phone at his apartment in Brooklyn. When I spoke with Bajah our conversation touched on his musical background and the Dry Eye Crew’s current project, but it’s clear from his cracked voice and dimmed eyes that his heart’s not in it. Any talk not related to the current situation at home appeared somewhat forced, disingenuous. So instead, we talked about what needs to be talked about.

Rob for Okayafrica: Have you recently been in touch with people back home?

Bajah: Yeah, I’ve been constantly receiving news. People are still dying. One of my friends is writing to me right now on Facebook, he’s pissed off. He just lost two of his sisters. The problem is continuing. We just had a three-day lockdown and thought it might be better, but it’s still happening.

OKA: Why is he angry?

Bajah: Because his sister died after she’d received some sort of an injection. This has been happening. There’s a lot of misinformation at the moment, people thinking it’s some kind of vaccine that they’re giving to people [causing their deaths]. That’s why my friend is angry; he’s saying it’s this injection that’s killing the people.

OKA: What do you think the reasons are for the delayed international response?

Bajah: People are saying a lot of different things. Some are saying it takes a lot of time to collect all the supplies. Others are saying it’s all too expensive and we can’t afford it, but now it’s just out of hand.

Many feel it‘s become a case of too little, too late. People have been crying about Ebola for months now, even a year. When there have been previous Ebola outbreaks – such as in the DRC – they’ve managed to contain it. I don’t understand why we’ve not been able to do that this time around? I think we should look to those people, the doctors in the Congo and see how they fought against this thing. There’s just too much information right now, it’s hard to really know what to do. Everyone’s coming up with their brilliant ideas, but they’re not well formed. It’s just people that are scared and talking, trying to reassure everyone, telling them “it’s all good.”

OKA: How has it affected your family?

Bajah: They’re still alright. The thing is, even if someone dies a natural death now, you can’t tell who was sick from Ebola, and who was not.

OKA: This must greatly affect the way people interact with each other?

Bajah: We had that three-day lockdown where no one was moving, but after that, people have started to do things again. People have to pay school fees, pay rent.

This is more than a war because you don’t know who is your enemy. It could be your friends. People like to hold each other in Africa. We sit closely, touching each other in public transport; in the market place people are pushing and pulling each other. It’s hard to prevent these interactions and with so many infections, it’s a very scary time.

OKA: What are some of the stories we’re not receiving from the international media?

Bajah: There are some who thought it was a political thing when it first started. I don’t even know why, because it started in Guinea. I guess when it did come to Sierra Leone, it started in the area of the opposition party’s main headquarters so that’s why rumors started. It’s politics blending with this problem, making it all worse. And it’s those same people who are running, telling people some vaccine is killing them, giving them the Ebola virus.

I don’t know man. Everyday we’re getting texts from Africa, people asking for money. This is a friend who just texted me [passes his phone over]. It’s in Krio so I don’t think you’ll understand. He’s just talking about the situation.

OKA: Given your international platform as a musician and artist living in the US, how do you see your role best served during this crisis?

Bajah: Right now because I’m here [in the US], it’s mostly doing interviews and spreading awareness. We did a sensitization song to unify the message to let people know they can be healed and should seek treatment. Mostly, it’s been trying to convince people that they need to protect themselves, that’s the main key here. I think the people need someone they can believe in who aren’t politicians who are just saying the same thing and with say, this track, we can promote a message that can spread and that can really help. I’m talking about consciousness. If people are conscious then we can spread that, and then we can stop the spread and fight Ebola and make people more aware.

OKA: Let’s talk about this sensitization track. How did that come about?

Bajah: I was the one who came up with the idea. I made the instrumental track with the studio I work with back in 2008. So I just recorded the vocals and sent them to A-Klazz who also features on it. Then we sent it to our management

OKA: What’s the feedback been like from the track?

Bajah: Oh yeah, it’s one of the most played songs on the radio and in general. If you check our Facebook you’ll see some of the fans that have responded. People seem to appreciate the message and have praised the track for its transparency.

OKA: In terms of transparency, what do you mean by that?

Bajah: Well, the message, which is very clear and easy for people to understand. The message is that one of the main problems is that a lot of people have denied that Ebola is real. This is the main reason we made this track to let people know – Ebola is real and that they should protect themselves by using preventions. At the end of the song, I speak directly to the people and tell them: when you get symptoms you need to go straight to get checked out and you should always be washing your hands and try to avoid crowds. Basically we’ve tried to create awareness around ways of contraction and methods for prevention.

OKA: What do you see being the most important thing to be doing at the moment?