The Battle Of Adwa: Why I'm Proud Of My Ethiopian Ancestors [Op-ed] 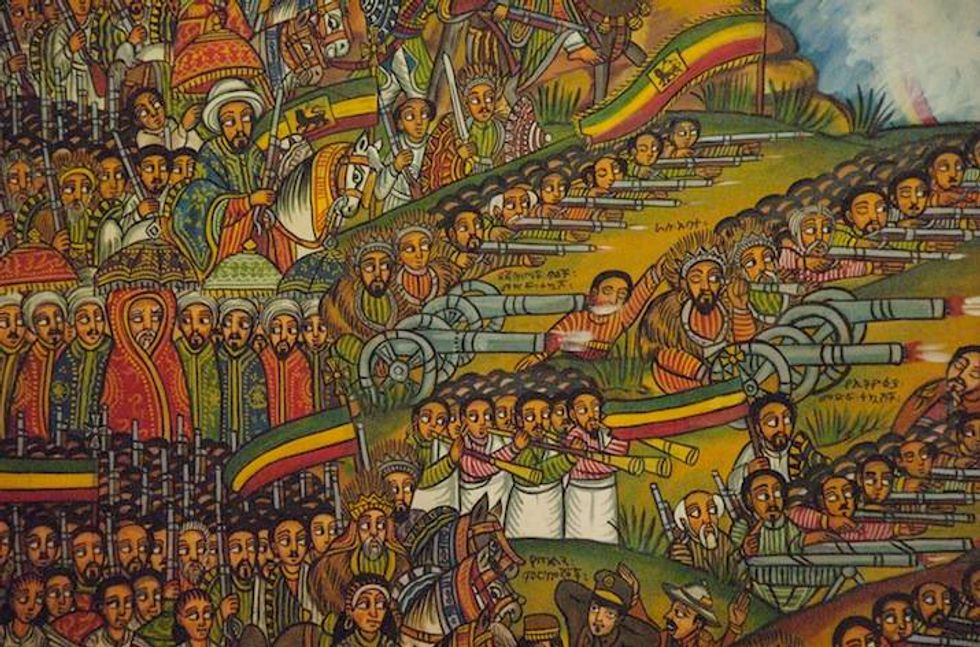 March 1 marked the 119th anniversary of Ethiopia's victory at the Battle of Adwa.

Yesterday, March 1st, we received a message asking why there was no mention of the 119th anniversary of Ethiopia's victory at the Battle of Adwa on Okayafrica. The question came from Addis Ababa-based engineer Selam Kebede. "Isn't this an African Victory? Aren't we the one and only black nation that beat out Europeans and maintained our independence?" she wrote. In the following op-ed, originally published on Medium, Kebede shares why she's proud to celebrate her Ethiopian ancestors' victory at the Battle of Adwa on March 1, 1896.

If I could name a single most phenomenal event in the Ethiopian history that humbles my heart, it is the battle and victory of Adwa. This is because the battle at Adwa wasn’t just another conflict but the sum of several years of calculated mischief, treachery and disdain by the then colonial Europeans. And the battle was won with a colorful victory by the Ethiopians because it was a matter of Ethiopia. It was a question of Abyssinia being colonized or not.

See, the thing is, the Italians didn’t know who they were dealing with. They thought they were so clever and superior in every way that they didn’t even want to put up a fight, but simply take the country by making King Menelik II sign a deceiving treaty at Wuchale. Given the whole of Africa was under different colonial rules at that time it never crossed their mind that these habesha people were any different, so if they want to fight, they would simply crush them and make them accept that they are their colonial rulers from then on. Little did they know how Ethiopians would prefer death than seeing someone else’s flag in their soil. Little did they know how brave their Queen Taitu, how smart their King Menelik or how skilled their warriors were.

I remember once a girl (somewhere from Europe) asked me when our independence day was and I causally replied with “we don’t have Independence day.” The girl looked so pitiful and said, “oh am very sorry about that!” Few seconds had to pass untill I actually realized what this means. What she meant. What it means to not have an independence day because you know….I come from a land that has always been independent. This was perhaps one of the most striking points in my life with regard to my Ethiopian-ness, and what it means to be from the only independent black nation in the world. I said to the girl “don’t be sorry, it’s because we only have victory days," as I vowed to be forever grateful for my ancestors.

Because of these people, and the Adwa victory in particular, me and 90 million other Ethiopians never fit in to that little box of the typical “black history.” Over time, and especially during my years living abroad, I've seen of how the world views Africa and Africans and people of African descent-- and I feel humbled and thankful for my ancestors who saved me my dignity and identity. No stupidity regarding race and identity crises could ever shake my integrity. Because of my ancestors, I stand before the rest of the world proud and dignified, regardless of what the world believes.

Thank you Atse Menelik II. Thank you Etege Taitu. And thank you all the brave men and women who died out of love for their country.

I am forever indebted.