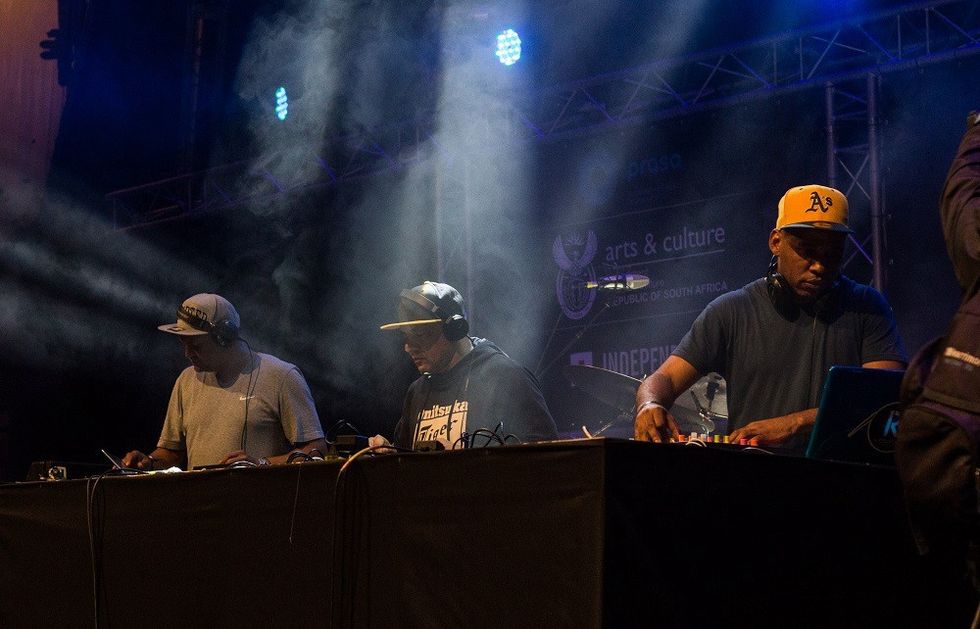 The project features the A-listers of Cape Town hip-hop, from both the old and the new school. Look out for appearances from the likes of Uno July,Deff Eff, Kanyi, YoungstaCPT, Driemanskap, EJ Von Lyrik, Andy Mkosi, Linkris The Genius, Early B, Cream, Chase, Dope Saint Jude and a whole lot more.

Artists from outside of Cape Town such as ProVerb, Zubz, Black Moss, and a few more, are also featured on 7785 Disrupters.

The trio made sure to place each artist on an instrumental that matches their style. As a result 7785 Disrupters is one of the most diverse projects you'll hear this year. The different personalities and mind states of the featured artists means the subject matter on the album is varied. For instance, ProVerb waxes poetic about the state of hip-hop on "My Kinda Hip Hop," while YoungstaCPT and Kanyi paint the picture of what it's like to live in the hoods of Cape Town on "Soundboy Killa."

Production on the album ranges from trap to boom bap and even funk.

On first listen, 7785 Disrupters reveals itself as a solid project with no forced collaborations, as can be the case with albums that have too many features. And through the diversity, the album doesn't sound like an incoherent collection of bangers (you know how DJ albums usually are).

The album includes the singles "Bo Kaap" (featuring YoungstaCPT), "Level It Out" (featuring Zubz) and "My Kinda Hip-Hop (featuring ProVerb). The album version of the latter, which is the project's opening track, is an embellishment of the single version. While the single version was boom bap, this time around 'Verb's nostalgic rhymes find a new home in the form of an 808-heavy trap instrumental. My ear will take sometime to adjust.

Beat Bangaz are one of the most forward-thinking hip-hop artists in South Africa, harnessing the Internet to levels not many of their generation have. They have built an empire that includes a DJ academy, an online radio station, and are big on community building projects.

Which is why the album title is a fit—they are indeed disruptors. The Cape Town hip-hop scene is segregated, and what better way for the OGs to lead by example than to give you an album featuring artists you'd otherwise never hear in one song?

The last time I heard Afrikaaps, spaza and English rap together to such an extent in one album was on the 2007 compilationPlanetary Assault released by the label Pioneer Unit.