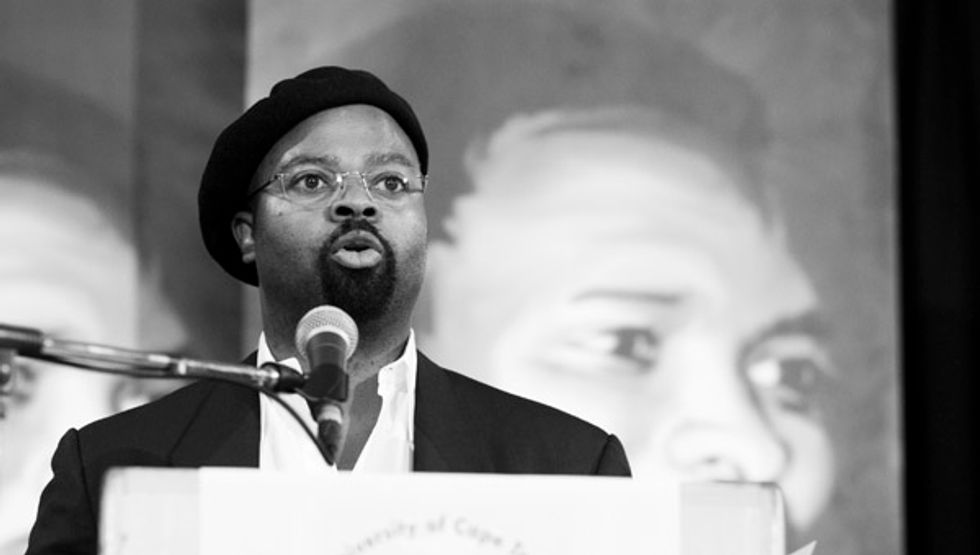 In September 1977, Stephen Bantu Biko, an anti-apartheid agitator, writer and co-founder of the Black Consciousness Movement, died in police custody from a brain haemorrhage caused by severe blows to the head. A death Sir Sydney Kentridge, counsel to the Biko family, bleakly described as “miserable and lonely…on a cold prison floor”. He was thirty years old.

The annual Steve Biko Memorial Lecture, now in its thirteenth year and in the past delivered by luminaries such as Nelson Mandela, Chinua Achebe, Ngũgĩ wa Thiong'o and Alice Walker; commemorates the enduring legacy of his short life and the relevance of his ideas on freedom, equality and justice. To mark the occasion, this year the organisers invited 1991 Booker Prize-winning Nigerian writer, Ben Okri, to pay tribute to the slain visionary of the anti-apartheid struggle.

Dressed in a black suit and a matching beret, the fifty-three-year old giant of African letters, said growing up in independent Nigeria, one of the great moral questions about the world was first posed to him by the struggle against apartheid. The iconic black and white photograph of Hector Pieterson dying in the arms of Mbuyisa Makhubo (below) after being shot by police during the Soweto uprisings in 1976, Okri said, awoke him from a moral sleep. “I was roughly the same age as the children being slaughtered in that famous picture and it instantly made me aware that our fates are one.”

The brilliance of Steve Biko (I Write What I Like), much like his intellectual forerunner Franz Fanon (Black Skin, White Masks), was in situating the struggle against racial subjugation in the realm of consciousness. “The most potent weapon of the oppressor is the mind of the oppressed” he argued; articulating the link between tyranny and its corrupting influence on selfhood. The path to freedom, he surmised, would begin with a renewed self-vision on the part of the oppressed. “In a sense Biko transcends politics and has in him something of the terrible integrity of the true artist” Okri said, “one who with hammer-blows will relentlessly pursue his vision of exalted truth regardless of its consequences. In that sense Biko is more than just the unfinished conscience of this land; he is also that finger pointing at the only acceptable future: a life and a society in which citizens can be proud of what they are. Biko’s spirit is permanently, fantastically set against the humiliation of man and woman”.

Shifting his gaze from the past to the contemporary, Okri said that the value of suffering is that it’s transformative: “when a people overcome the impossible, they achieve eventually a kind of evolutionary shift and epistemological break. They realise, eventually, deep in their souls something powerful about their will: they are never quite the same people again”. He continued; “history is like a nightmare we wake up from after a struggle and blink in stupefaction at the strangeness of daylight. With awakening a great energy is freed; a new question is posed: the nightmare is over but what do we do with the day?” This, Okri said, has been the real challenge of our times; what to do with the day? Other nations, he said, caught in the mire of corruption, dictatorships, coups and civil wars, had squandered the transformative possibilities of Independence. The courage, ingenuity and the toughness needed to overcome the great evils of colonialism and apartheid “are required much more for the days of sunlight…freedom may turn out to be a very small part of the story of a people. The real story begins with what they did with that freedom”.

Stripped of its apartheid context, Okri argued, “the heart of Black Consciousness is a message of 'becoming'; its goal is not limited, it hints at a continuing journey of self-discovery and self-realisation. This can be as wide and as expansive as the mind that interprets it. There can be no end to self-realisation. Every day we discover more and more who we can be - this is what Black Consciousness says to me: become who you are, and also, become what you truly can be. It is an injunction of greatness”. Ever the poet, he added: “after all, the people cannot come away in their oppression and fall right asleep after their liberation. A continued wakefulness is the burden of Black Consciousness; a continued vigilance is its responsibility.”

You can read Ben Okri’s lecture in its entirety here.